Heat continues as we watch the next tropical wave

The very same upper level ridge of high pressure that has led to a hot start to September will remain in place to end the week. This will begin to change by the weekend due to the emergence of a tropical wave in the northeastern Gulf.

Today and Tonight: Your Thursday will be hot and humid with mostly sunny skies guiding high temperatures into the mid 90s. Overnight will be mostly clear with low temperatures in the mid 70s. Generally, light winds are expected. 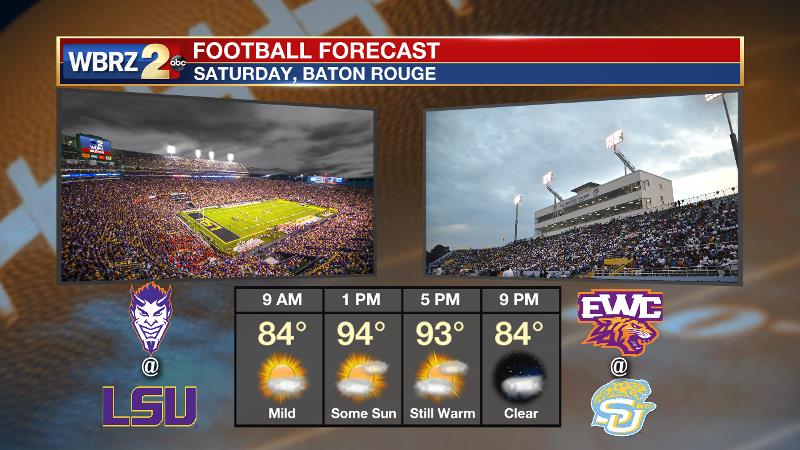 Up Next: After a duplicate forecast for Friday, Saturday begins a weather transition in the region. Initially, some moisture streaming west from a tropical wave in the northeast Gulf will interfere with the warming and drying upper level ridge of high pressure to introduce isolated to scattered afternoon showers and thunderstorms—mainly south and east of Baton Rouge. Depending on the evolution of the tropical wave, Sunday through Tuesday could feature a wetter weather pattern, but the path and strength of this disturbance is still a low confidence forecast. For more discussion, see below. Fortunately, for LSU and Southern football, Saturday just looks like a standard, steamy, late summer afternoon.

Notice how the most recent tropical weather outlook from @NHC_Atlantic accounts for forecast model guidance on this tropical disturbance shifting east. It is still too early for the "all clear" but there is increasing likelihood of no local impact. pic.twitter.com/xulrivl836

The Tropics: An area of disturbed weather over the central and southeastern Bahamas is gradually becoming better organized while surface pressures are falling in the area. Conditions are becoming favorable for a tropical depression or a tropical storm to form within the next day or so as the system moves toward the northwest through the northwestern Bahamas and toward the Florida Peninsula. Potential Tropical Cyclone advisories will likely be initiated later today. Hurricane Hunters are scheduled to investigate the system this afternoon, if necessary. Additionally, a tropical wave located just west of the Cabo Verde Islands is producing a small area of disorganized showers and thunderstorms. There is a 40 percent of tropical development by early next week across the south, central Atlantic.

Hot but quiet weather will continue through Friday. A stray shower or storm could form in the daytime warmth. An upper level ridge is responsible for the persistent, early September pattern. The main forecast player late weekend into early next week is a tropical disturbance moving into the northeastern Gulf of Mexico. 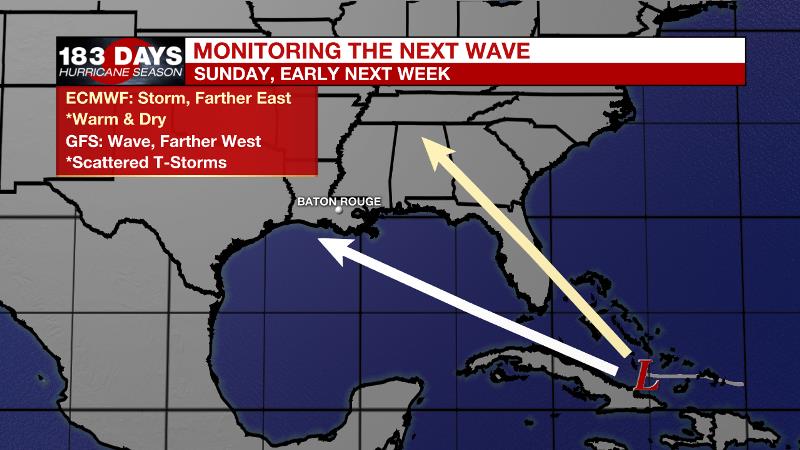 Forecast model guidance remains split. The ECMWF model features a tropical storm meandering closer to Florida and then due north. The local impact would be minimal in this case with hot, dry weather likely continuing. The GFS model points toward a weaker system and more westerly trajectory which could bring increased rain coverage to the Baton Rouge area early next. Of course, undeveloped systems present more forecast challenges due to poor initial input to the models, so continue to monitor the forecast. Any changes to track or intensity could drastically change our local expectations. As of now, we’re projecting Sunday through Tuesday to remain seasonably warm and humid with isolated showers and thunderstorms. In fact, this scenario might actually end up bringing some beneficial rain to the area.