Steamy afternoons and uncomfortably warm nights will be the weather theme through the weekend. The past 7-10 day stretch of active and stormy afternoons will take a break.

UPDATE: The National Weather Service in New Orleans has issued a Heat Advisory, which is in effect until 7 PM CDT this evening. Air temperatures will climb into the mid 90s with high dew point temperatures causing it to feel like 107-112 degrees. These high heat index values will cause an increased risk of heat-related illnesses including heat exhaustion and heat stroke. Drink plenty of fluids, stay in an air-conditioned room, stay out of the sun and check up on relatives and neighbors. If you work or spend time outside, when possible, reschedule strenuous activities to early morning or evening. Know the signs and symptoms of heat exhaustion and heat stroke. Wear lightweight and loose fitting clothing when possible and drink plenty of water. 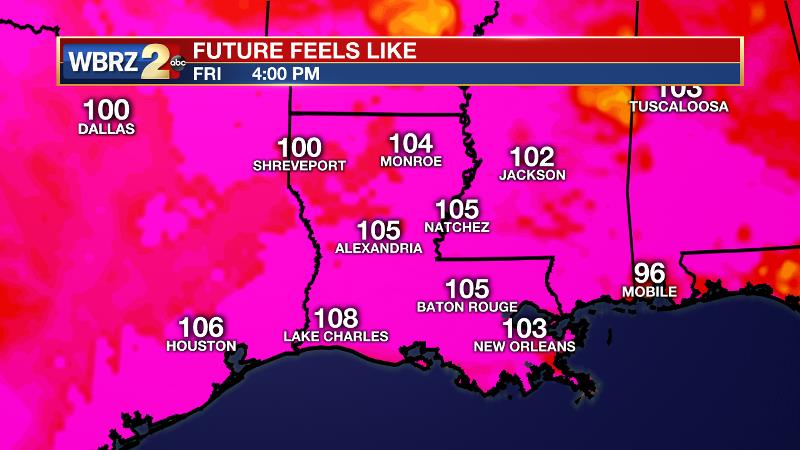 Today and Tonight: Plenty of sun and steam will be around through the day. High temperatures will make it into the mid 90s and with a lot of humidity, the feels-like temperature will approach 105 degrees. A stray shower or thunderstorm is possible, but most locations will stay dry. Overnight will be mostly clear with low temperatures in the upper 70s.

Up Next: This weekend, humidity will be seasonably high which will result in several hours each afternoon with feels-like temperatures in the 105-110 degrees range. Nights will be particularly uncomfortable, as dew point temperatures in the upper 70s hold lows near 80 degrees. The National Weather Service has the area on standby for some heat advisories. As far as showers and thunderstorms go, we will need to monitor a few upper level impulses that could lead to an uptick in activity—especially late Saturday into Sunday and mainly in the northeastern corner of the forecast area. Otherwise, only typical pop-ups are expected. This pattern will carry into the middle of next week. 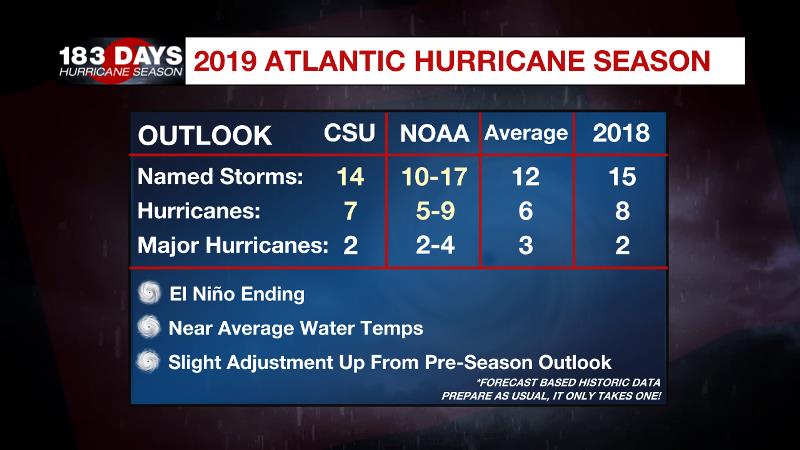 The Tropics: The Gulf of Mexico, Caribbean Sea and Atlantic Ocean are quiet at this time. No tropical development is expected over the next 5 days. On Thursday, NOAA forecasters monitoring oceanic and atmospheric patterns say conditions are now more favorable for above-normal hurricane activity since El Nino has now ended. Two named storms have formed so far this year and the peak months of the hurricane season, August through October, are now underway. Read their full release HERE. 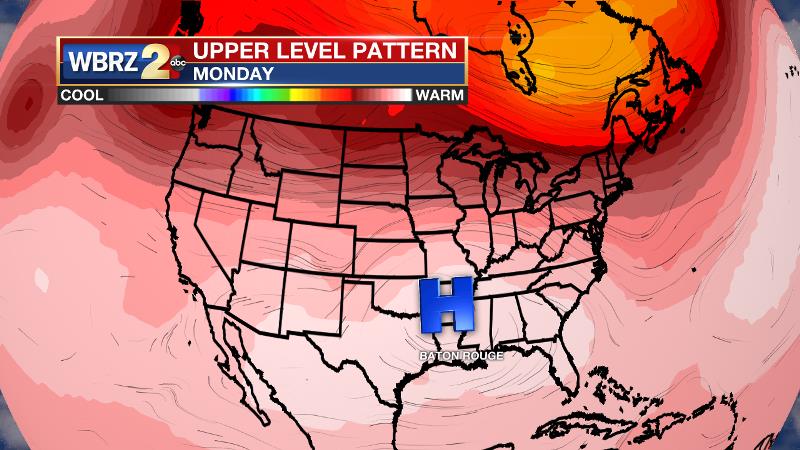 A ridge of high pressure will build over the region this weekend. The local area will undergo some noticeable changes as a result. First, high temperatures will top out in the mid 90s as the ridge centers over Texas and Louisiana. High dew points will result in heat indices exceeding 100 degrees for several hours each day and uncomfortable nights, barely exiting the 80s. Second, the subsiding air beneath the ridge will cut into the number of showers and thunderstorms that are able to develop. Consequently, the sinking air and pockets of drier air aloft mean that any storms that can develop will be capable of gusty wind. As a result, fewer but stronger storms will be in the forecast. A caveat to the rain coverage forecast is that a few disturbances riding around the ridge of high pressure could spin across the local area at times leading to a few rounds of showers and thunderstorms. These disturbances would be more likely to impact areas north and east of Baton Rouge. Of course, per the nature of warm season storms, downpours and frequent lightning remain possible.