A wet weather pattern will continue and possibly increase through Thursday, as Tropical Storm Gordon makes landfall in Mississippi. In addition to more frequent showers and thunderstorms, winds could gust over 30mph, especially east of I-55. For the latest advisories and information, see the live feed below from WBRZ Weather. 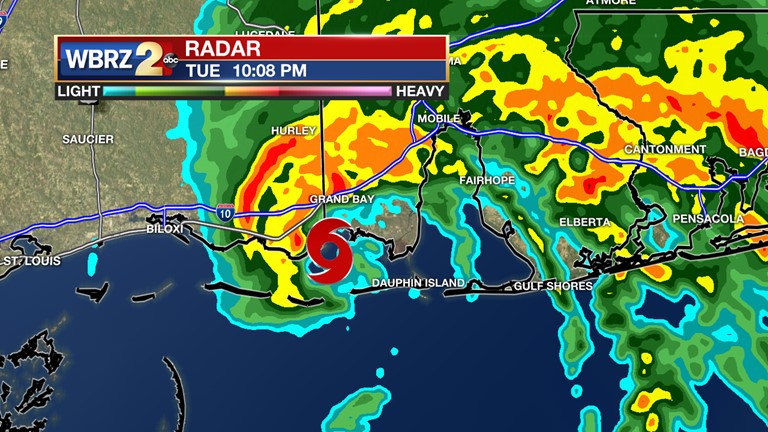 #BatonRouge has been dropped from the TROPICAL STORM WARNING as greater impacts from #Gordon will focus along at east of I-55 and coastal areas. #LaWX #MsWX pic.twitter.com/zyHB8a22ff

**ALL WARNINGS, WATCHES, AND ADVISORIES HAVE BEEN DROPPED FOR LOUISIANA PARISHES** 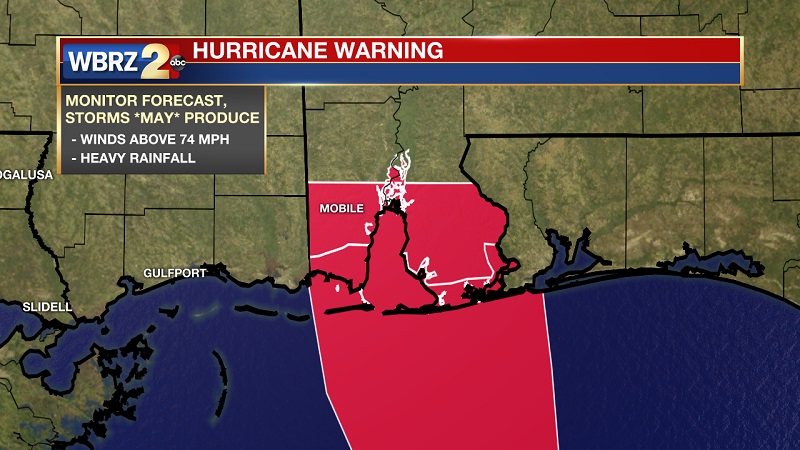 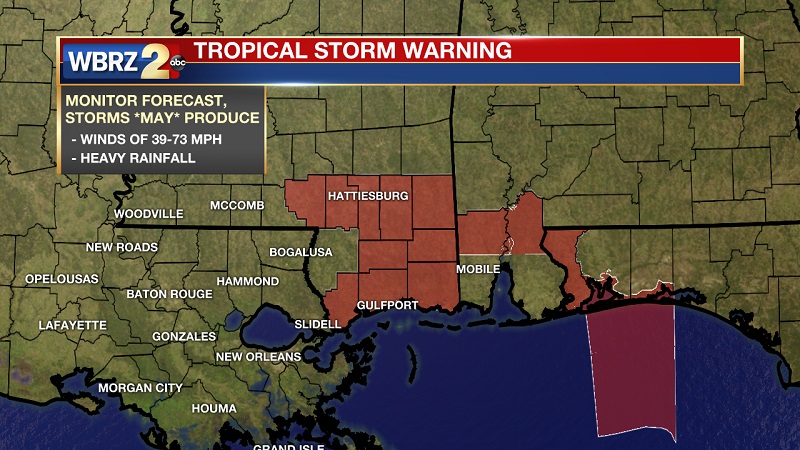 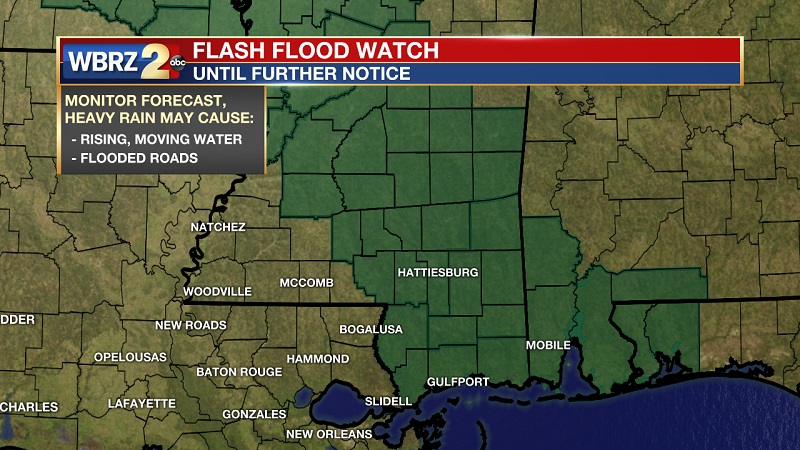 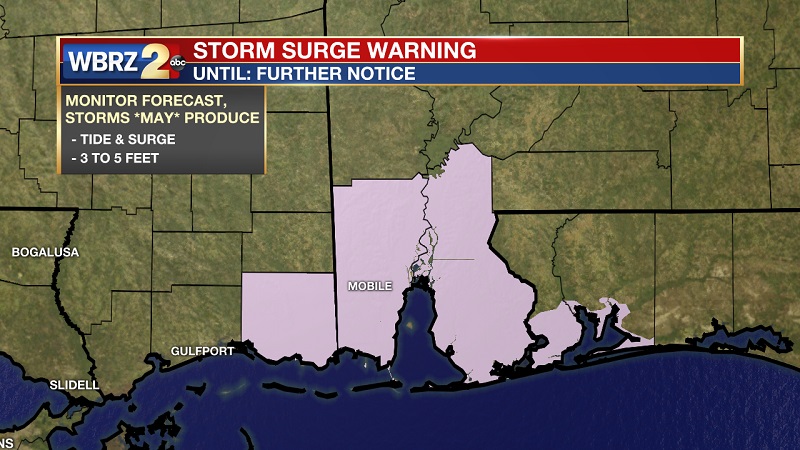 ACTIONS: At this time, there is no need for alarm for inland residents. You might consider double-checking that your typical tropical storm preparations and kit are in order as a matter of review for the time of year. Those with interests along to coast and east of I-55 should prepare for storm surge and tropical storm force winds. This would include securing and lifting coastal properties.

The Tropics: Tropical Storm Gordon continues to move northwestward at 14 mph through southern Mississippi and Alabama. With a minimum central pressure near 1002mb and maximum sustained winds of 50 mph, rapid weakening should occur over the next 24 hours as it continues inland through Mississippi. Impacts are expected to be much greater near and east of the storm’s center. Given the current forecast, that means tropical storm conditions are more likely northeast of Louisiana, more confined to southeastern and central Mississippi. There is a 0 percent chance of tropical storm force winds (greater than 39mph) in Baton Rouge and only 1 % chance within our area and confined to Pike county.

Tropical Storm Gordon has made landfall near the Alabama/Mississippi border around 10:00 PM Tuesday night. 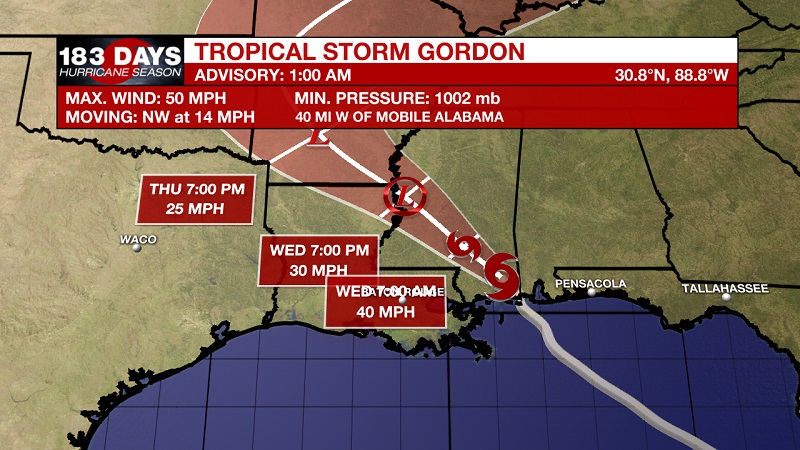 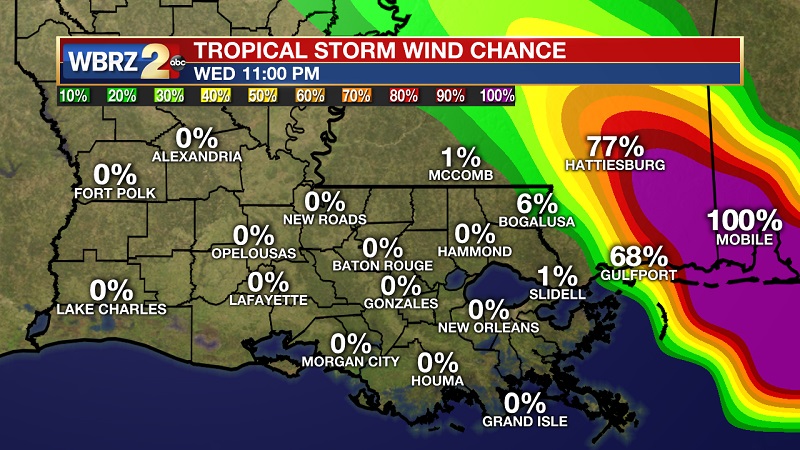 Rainfall is expected to be manageable, with numbers amounting to what much to the area would experience with daily summer showers and thunderstorms. Such amounts would not create any runoff issues for local rivers. This is all said with the caveat that any shift west by Gordon could dramatically increase the impacts across the WBRZ Weather forecast area. So as always, it is a good idea to take the necessary precautions as you would prior to any tropical system. 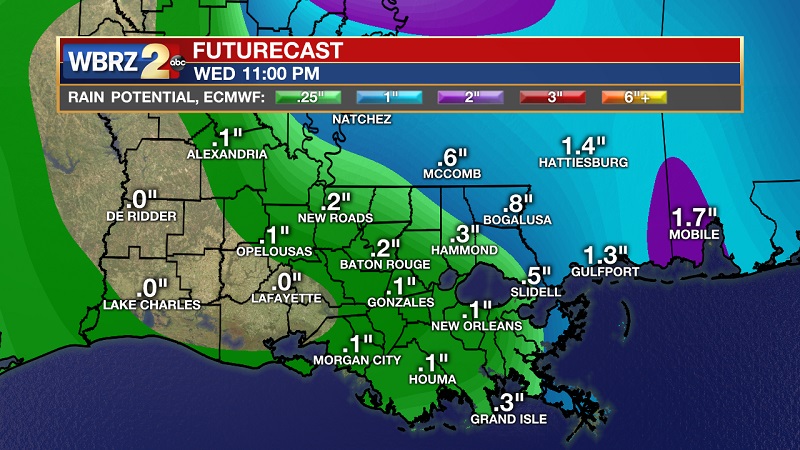 Tonight and Tomorrow: Cloudy skies and breezy conditions will persist tonight, as temperatures drop to an overnight low of 74° with easterly winds between 5 and 10 mph. Scattered showers and storms will still be possible through the day on Wednesday, as Gordon will likely keep its tropical storm status until the afternoon as he moves across Mississippi. Winds will be moving in from the southwest between 5 and 10 mph, with gusts possible to around 15 mph.

Up Next: Tropical Storm Gordon and its remnants will continue to bring scattered showers and thunderstorms to the area through Thursday. In fact, late Wednesday and Thursday could end up being wetter periods due to the local area then positioned south and east of the system. The ongoing feed of tropical moisture should help to enhance rain banding over the area. Occasional downpours and gusty winds can be anticipated through that time. Afternoon temperatures will top out in the mid 80s with nighttime lows in the low 70s. By the upcoming weekend, the area will return to a more usual pattern of warm mornings followed by afternoon showers.

Most of the more significant weather concerns surround Tropical Storm Gordon are confined to the north and east of the storm. The latest forecast track still brings Gordon through central Mississippi as a tropical storm, before dropping it to a tropical depression through northeastern Louisiana. Gordon is set to weaken to a post-tropical depression Thursday morning as he moves through south and east Arkansas. Higher winds and heavy rainfall will stay north of the center until crossing into northeast Louisiana, where it is set to effectively break up. Once Gordon runs its course, the weather pattern will transition back to regular onshore flow with marine breezes triggering scattered showers and thunderstorms each day. An elongated frontal zone will settle into the Lower Mississippi Valley early next week but is not likely to reach the local area with any temperature changes. However, it could serve as a better focus for enhanced rainfall next week.