PLAQUEMINE- Iberville Parish Councilman Raheem Pierce learned the hard way that not everything should be posted to social media.

In a post about his breakfast Friday, Pierce noted "Fried Robin fresh out of the backyard for breakfast! #countrylife #wecansurvive."

State Wildlife Agents showed up at Pierce's door Friday after the post was made and issued a summons for "taking Robins." Robins are migratory song birds that are federally protected. Agents with LDWF said possible penalties could be up to a $1,000 fine and/or 120 days in jail. Pierce admits that he killed at least 10 Robins but did not know that was illegal. 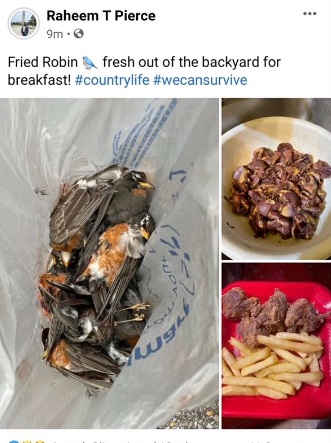 Pierce talked to WBRZ over ZOOM and took full responsibility for his actions. He said he was in Alabama helping with tornado cleanup.

"I would not be a very intelligent person with the position that I'm in to post something illegal," Pierce said. "It was a simple mistake that I was unaware of."

Pierce said he learned his lesson the hard way.

Pierce made history in Iberville Parish has the youngest person to ever be elected on the parish council. Pierce was still in high school when voters selected him to represent District 6.

The summons Pierce was issued gave him a criminal court date and a date to make civil restitution.

"I didn't know it was illegal," Pierce said. "I know now, and I've learned from it. It's time to move on and continue to do great things in my community."