Dry lately but that's about to change

A cold front will push through the area with showers and storms on Wednesday. While this will not cool temperatures much, it will pave the way for a rainy stretch into next weekend.

The Next 24 Hours: Expect mainly clear skies overnight and this will allow low temperatures to dip into the mid 40s. The weather will change quickly on Tuesday. Sunny skies during the morning will push high temperatures into the mid 70s around lunchtime. However, clouds will begin to increase from west to east in the afternoon and there could even be a few sprinkles in spots.

After That: A cold front will slide into the area on Wednesday. This system will be losing its punch on the way through so the threat for severe weather is very limited. Overall, we are looking at a cloudy day with scattered showers and thunderstorms. Additionally, the weakening boundary means temperatures will not fall much and will stay above average through Saturday. A little break in clouds and showers is ahead for Thanksgiving with partly sunny skies and highs near 75. A rather unsettled pattern will then begin on Friday and last through the weekend. All three days, you can expect periods of rain and a few thunderstorms that will leave behind 2-5 inches by Monday morning. Since the last several weeks have been dry, there is not an imminent flooding threat, but as you know, a lot in a short time can always create some issues. It looks like a cold front will push temperatures below average by early next week. CLICK HERE to view your complete 7-Day Forecast.

The Tropics: A broad area of low pressure northeast of the central Bahamas continues to produce disorganized cloudiness and showers.  Strong upper-level winds are expected to limit additional development of the system before the low merges with a cold front on Tuesday. Later in the week, the system could become separated from the front has a 20 percent chance of development.

The Explanation: Surface winds will slowly turn southeasterly on Tuesday allowing low level moisture to increase and clouds to develop. The air mass could even moisten quick enough for a few light showers to form, especially west of the Mississippi River. An upper level disturbance moving across the Midwest will send a weakening cold front into the region on Wednesday and this could lead to scattered showers and thunderstorms to pop as early as the morning hours. While the front slides into the area, parameters for severe weather will remain north. In addition, the weakening upper level winds will cause the front to stall near the local area. A temporary push of dry air should lead to a calmer Thanksgiving Day. Meanwhile, an upper level trough will begin to form over the Mountain West. By Friday, this trough will merge with a disturbance over the Midwest and will create a large region of divergence and lift in the atmosphere. As southwesterly winds transport deep moisture into the region from the Pacific and Gulf, the stage should be set for a 2 to 4 day period of rainfall. 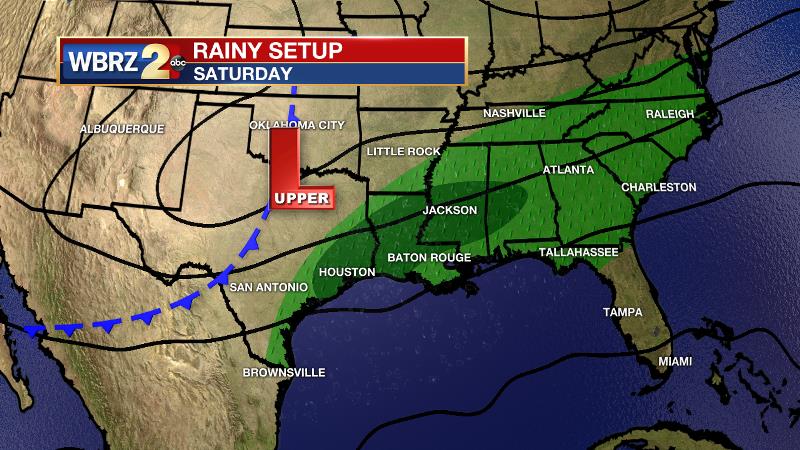 The main discrepancy between forecast models at this time is whether the pattern lasts until Sunday or Monday. All told, about 2 to 5 inches of rain is expected, with the highest totals likely north of I-10. Fortunately, it has been quite dry over the last few weeks and the grounds can thoroughly saturate before runoff becomes an issue. Still, we should keep an eye on it. A cold front will put an end to the messy weather around Monday and (well) below average (67/45) temperatures are anticipated into the middle of next week with several lows in the 30s!