The weekend really worked out to be a bit drier than expected. That was just the beginning of an extended “mainly” dry stretch of weather for the Capital Area.

The Next 24 Hours: Overnight will be mostly clear with low temperatures in the low 70s and light winds. Tuesday will roll very similar to Monday as skies stay partly to mostly sunny with high temperatures heading into the low 90s. A weak cold front will be passing through the region—a shower or thunderstorm cannot be completely ruled out but chances are very low.

The Long Term Trend: The weak cold front will actually have luck in penetrating at least as far south as I-12. As a result, some slightly drier surface air will filter in for Wednesday and perhaps Thursday. It will be difficult to sense any major changes but low temperatures could make it into the low 70s or even upper 60s for traditionally cooler sections of southwest Mississippi. High temperatures will ease into the low 90s but thanks to less than oppressive humidity, the feels like temperatures should stay in the upper 90s. This will all change by the end of the week as the front dissipates and onshore winds return. That will spell higher humidity and feel like temperatures will soar back into the 100s. Normal, isolated afternoon showers and thunderstorms will work back into the forecast by late week or the weekend as well. 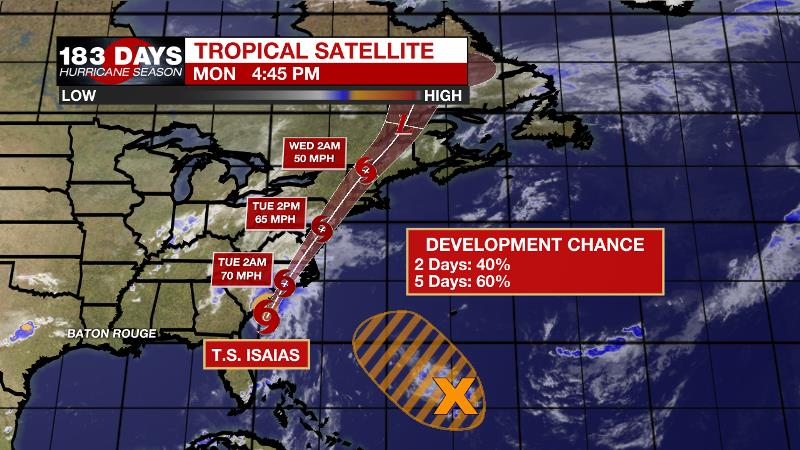 The Tropics: As of 4pm Monday, Tropical Storm Isaias was 50 miles south of Charleston, South Carolina with maximum winds of 70mph and moving to the north-northeast at 15mph. The storm is expected to continue on this path but and accelerate as it scrapes up the Eastern Seaboard Tuesday and Wednesday. While the storm could briefly regain hurricane status prior to a landfall in the Carolinas, it will hold tropical storm strength well through the Mid-Atlantic into New England. Tropical Storm Warnings are in place from the Savannah River to Stonington, Maine. Hurricane Warnings for the coastal areas near the South and North Carolina border. A surface trough of low pressure a few hundred miles south of Bermuda, will encounter marginally favorable conditions development later this week. The National Hurricane Center places a 60 percent chanced of development over the next five days as it stalls several hundred miles southwest of Bermuda by the latter part of the week.

The Explanation: An upper level trough of low pressure will continue to slide northeast of the area through the middle of the week. On the back side of this feature, upper level winds out of the northwest will maintain a drier atmosphere through the middle of the week. This will make convective development very difficult and therefore rain chances will stay around 10 percent. Additionally, this will make way from a weak surface (cold?) front to drift southeast and into the Capital Area. It looks as though dew point temperatures will scale back into the 60s for 24-48 hours Tuesday and Wednesday. This will allow nighttime lows to reach the low 70s or even upper 60s in typically cooler locations while daytime highs remain seasonably warm  in the low 90s. Heat indices will be held in check by the brief spell of lower humidity. An upper level ridge will build into the Lower Midwest later this week and into next weekend. While the ridge will keep the atmosphere mostly dry, surface winds will become southerly and allow a return of humidity. The combination should result in high temperatures in the low to mid 90s with oppressive humidity, possibly resulting in dangerous heat. Since the ridge will not be centered over the region, marine breezes may still instigate isolated showers and thunderstorms. However, this limited, afternoon coverage will not cancel out the heat for most.