After five days of clouds and unseasonable warmth, a cold front has restored conditions that are more typical for late December. A significant soak looks likely early in the New Year.

Today and Tonight: An area of high pressure will be responsible for an afternoon of sunny skies and light winds. Slightly below average high temperatures are expected with top out readings near 60 degrees. The cooler air mass will lead to low temperatures in the upper 30s overnight.

Up Next: Tuesday and Wednesday's high temperatures will struggle to get out of the 50s, with clouds building and isolated showers possible by Wednesday evening. These will be associated with a low pressure system that is set to develop in the northern Gulf and push onshore between the Florida and Louisiana coasts. Currently, models are showing a 12 to 24 hour period of heavy rainfall, enhanced by the possibility of training thunderstorms. This means storms with downpours could continue to build over the same areas repeatedly. If this forecast stays on course, expect the National Weather Service to issue flood bulletins. Some showers should stick around into the early morning hours on Friday, before tranquil weather returns for the first weekend of 2020.

More seasonable conditions have returned after a frontal passage on Sunday evening. With an area of high pressure in the region allowing for clear skies and light winds, the next two mornings will be cooler than average with low temperatures in the upper 30s and low 40s. A strong upper level trough will move across the middle of the country on Wednesday, allowing strong and deep southwest winds to set up across the central Gulf Coast. This flow will transport ample moisture into the region, priming the atmosphere for precipitation. At first, clouds will overspread the area late Wednesday with some showers possible after dark. Continued saturation of the atmosphere will allow more widespread rain and thunderstorms to develop by Thursday morning. 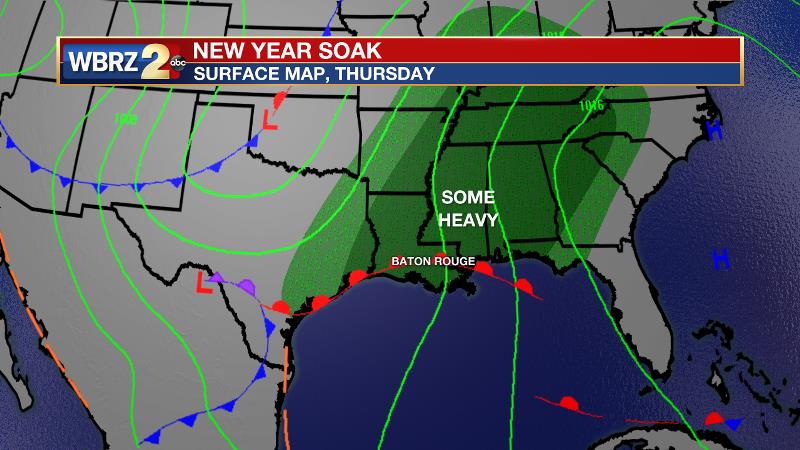 Forecast model guidance continues to agree on a band of heavy rain setting up somewhere in southeast Louisiana into southwest Mississippi with totals of 2 to 4 inches likely and localized higher amounts possible. Following this system for the first weekend of the New Year, expect temperatures to be on the chilly side, as a deep trough becomes entrenched in the Eastern U.S.