The 2018 Atlantic hurricane season officially concluded on November 30, and will be remembered most for hurricanes Florence and Michael, which caused significant damage in the southeastern U.S. In total, the season produced 15 named storms, including eight hurricanes of which two were “major” (Category 3, 4 or 5). An average season has 12 named storms, six hurricanes, and three major hurricanes.

For the first season, forecasts were aided by the high-resolution imagery from NOAA’s new GOES-East satellite (GOES-16), and the American Global Forecast System (GFS) model, which produced accurate forecasts of landfall location and timing for both hurricane Florence and Michael. NOAA’s hurricane hunter aircraft flew more than 580 hours this season and provided valuable data in support of forecasting, research and emergency response. 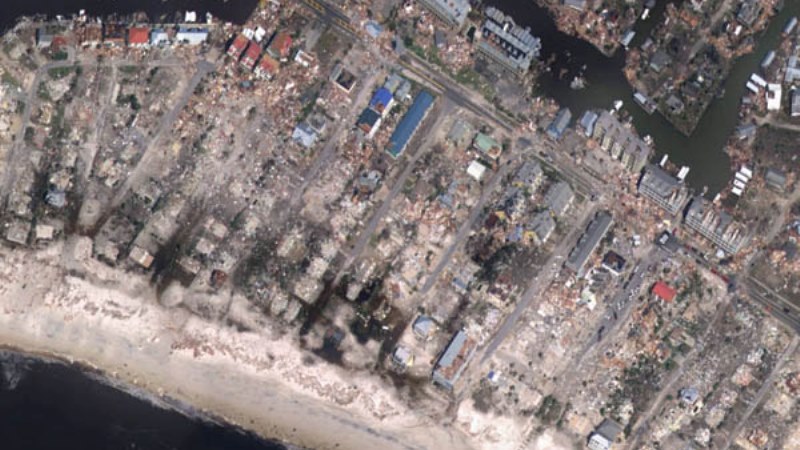 For the fourth consecutive year, hurricane activity began prior to the official June 1st start of the season, with Tropical Storm Alberto forming on May 25. Alberto made landfall in northern Florida and traveled as far north as the Great Lakes as a tropical depression.

The 2018 hurricane season was the first since 2008 to have four named storms active at the same time (Florence, Helene, Isaac and Joyce). Hurricane Florence caused catastrophic flooding in portions of North and South Carolina. Several river forecast locations in the Carolinas approached or broke their record flood level in the days and weeks following the hurricane. It took two to three weeks for many river locations to fall below flood stage, and the final river crested one month after Florence made landfall. 53 deaths were attributed to the storm and initial damage estimates are near $16 billion, making it one of the top 15 costliest storms on record.

Hurricane Michael, at Category 4 intensity, was the strongest hurricane on record to strike the Florida panhandle. It was the third-most-intense hurricane to make landfall in the continental U.S. on record in terms of central pressure (919 mb) and the fourth-strongest in terms of maximum sustained winds (155 mph). The death toll related to this storm is at 60 with just under $15 billion in estimated damages, which would also place this storm in the top 15 costliest

“The 2018 season fell within NOAA’s predicted ranges in our pre-season outlook issued in late May. However, the overall season was more active than predicted in the updated outlook issued in early August,” said Gerry Bell, Ph.D., lead seasonal hurricane forecaster at NOAA’s Climate Prediction Center. “Warmer Atlantic Ocean temperatures, a stronger west-African monsoon and the fact that El Nino did not form in time to suppress the season helped to enhance storm development.”

With lessons learned from the 2018 hurricane season still fresh in memory, now is the time to make note of ways to improve family hurricane plans for next year. The 2019 hurricane season will officially begin on June 1 and with initial predictions and preparedness beginning in April and May.