Quiet and seasonable weather is expected through Thanksgiving. A brief advance of warm air will fuel the next cold front pegged for Saturday.

As far as Thanksgiving travel is concerned, morning rain along the Gulf Coast could cause some slowdowns early Wednesday, but the weather will be more cooperative by afternoon. Elsewhere, a significant storm system could cause delays in the Great Lakes and Mountain West regions due to snow and the Southwest U.S. due to rain. Windy conditions are anticipated in New England. 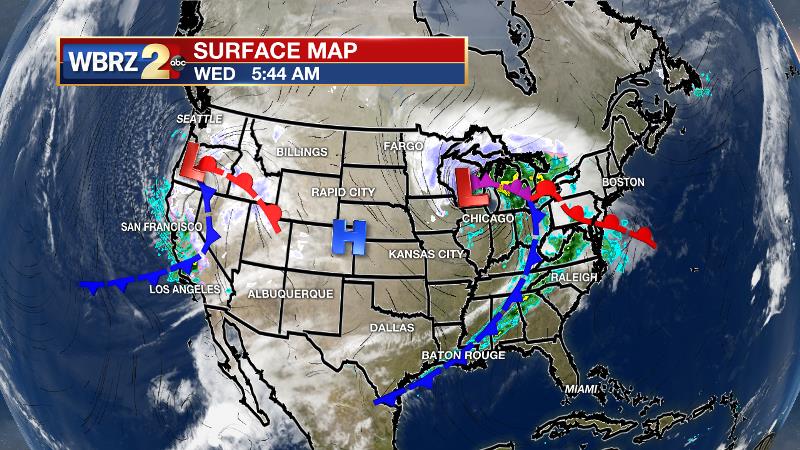 Today and Tonight: A weak cold front will push the last of the rain through on Wednesday morning before stalling along the coast or just offshore. This stall will result in some clouds lingering Wednesday morning, but peeks of sunshine are also likely in the afternoon. Behind the front, high temperatures will be a touch cooler, leveling off around 70 degrees. Additionally, the unseasonably stickiness will also break. Overnight will be partly cloudy with low temperatures in the low 50s.

Up Next: Thanksgiving will be nice and quiet with partly sunny skies and near normal temperatures topping out near 70 degrees. Friday and Saturday will be warm with high temperatures approaching 80 degrees prior to the next cold front. That frontal system is pegged for late Saturday and will need to be monitored for multiple reasons—including the possibility of severe weather and timing implications for LSU and Southern football. As of Wednesday morning, it appears that the system will bring a line of rain and thunderstorms to the area Saturday night, perhaps making ponchos necessary in Tiger Stadium. Obviously, changes in the speed of that system will dictate changes to the forecast.

A cold front should crawl just far enough into the Gulf of Mexico by Wednesday afternoon to shut showers down in the Baton Rouge area. Behind the front, temperatures may cool by a few degrees late Wednesday through Thanksgiving, but it will not be nearly as chilly as last Saturday and Sunday. An upper level ridge will build over the Southeast U.S. on Friday and Saturday causing well above average temperatures. 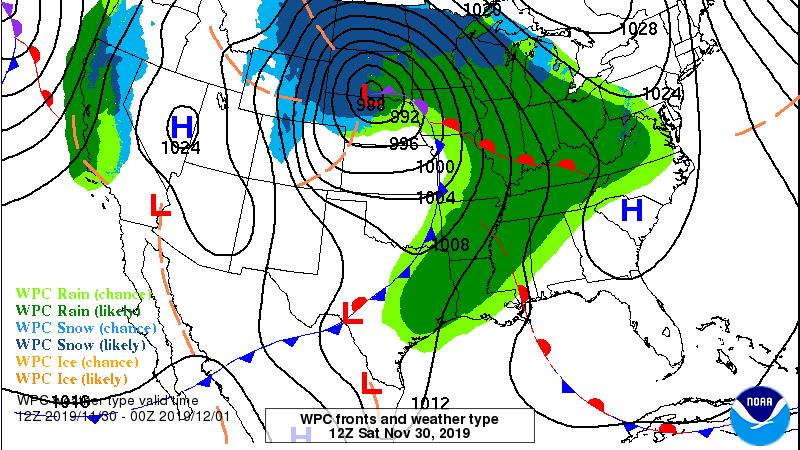 Timing the next storm system will be critical to several outdoor events on Saturday. A frontal system will move through the region on Saturday night. Another round of rain and thunderstorms will accompany that front. While the most favorable ingredients for strong thunderstorms will likely stay north of the local area, the Storm Prediction Center has broad-brushed the Gulf Coast with a 2 out of 5 “slight risk” for severe weather. The front will race through the area on Sunday morning with clear, cool and quiet weather from there. A strong surface high pressure system will settle overhead for Monday and Tuesday. Temperatures will be 5-10 degrees below average Sunday afternoon through Tuesday afternoon.