Cold, dry conditions will round out the week. Outdoor plans get a green light and a jacket this weekend.

Today and Tonight: Strong northerly winds will overcome any sunshine on Wednesday and keep high temperatures in the mid to upper 40s. With 5-10mph winds, the chill factor could be in the upper 30s. Cloud cover should pester the area through the morning if not for most of the day. Sun may peek out from west to east late. With much more clearing Wednesday night, our first freeze of the season is expected by Thursday morning. The I-12 corridor will dip to 31 or 32 degrees with cooler readings north. Locations south of I-10 should hover just above freezing.

A ***FREEZE WARNING*** is in effect from late Wednesday night through Thursday morning. This means temperatures will drop to 32 degrees or lower for 6 to 8 hours over southwest Mississippi and 3 to 6 hours in southeast Louisiana. Sensitive vegetation could be damaged. Wind chill values in the 20s will impact people and pets outside for prolonged periods, so please be sure they have access to warmth. Pipe bursting is not typically a concern until temperatures go below 25 degrees but you may use this as a reminder to wrap now ahead of possible colder times this winter. 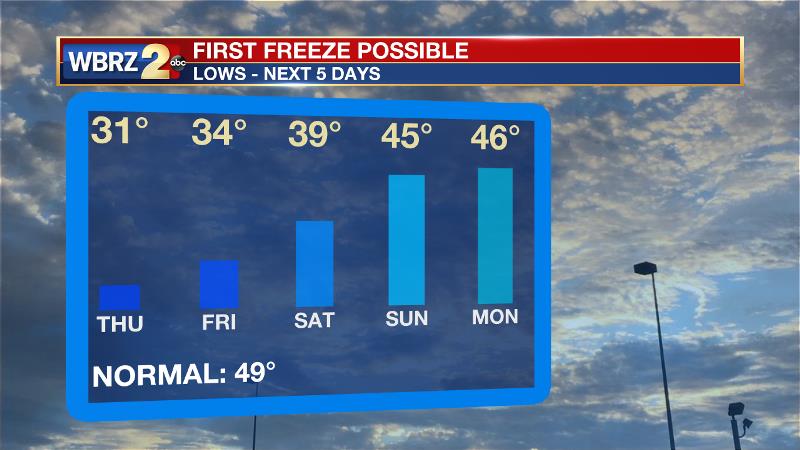 Up Next:  Sunny skies will contribute to temperatures slowly warming through the week, with 50s on Thursday afternoon, and 60s Friday through Sunday afternoon. Morning lows will be in the mid to upper 30s through Saturday. The next rain seems to be beyond the scope of the 7-Day Forecast.

Rain chances will end from west to east Wednesday morning as an upper level low moves across northern Louisiana. The unseasonably cold air mass will be well entrenched by this time. Highs will once again struggle to get out of the mid 40s. These temperatures are 25 to 30 degrees below normal for the time of year. The departing trough should also lead to some clearing in the cloud deck with sun possible late—especially for areas west of I-55. A dry forecast is then expected through the weekend as surface high pressure builds and lower than average heights continue in the upper levels of the atmosphere. The first light freeze of this fall season is expected on Thursday morning. Surface high pressure will still be west of the area meaning winds will be out of the northwest at about 5 mph. The freezing line should be along the I-10/12 corridor. Record lows could be tied or slightly exceeded in a few locations. A reinforcing cold front may move through early Sunday. However, rain chances are not likely because a lack of return flow will starve the front of moisture. Temperatures will remain below normal.