Sprinkler systems are a good idea this week. While a spotty shower cannot be ruled out, the better bet is for a completely dry 7-Day stretch.

Today and Tonight: Temperatures will run for the 80s by 10am and a high in the low 90s by mid-afternoon. Mostly sunny skies are expected. The nighttime will be mostly clear with lows in the low 70s.

Up Next: An upper level ridge of high pressure will stay in place over the Southeast for the extended period. This will keep skies sunny and conditions dry. Temperatures will stay above average, but the lower dew point temperatures will allow afternoons to feel a little less steamy than July and August. As the ridge slides east late in the week some spotty afternoon showers could form. However, the warm temperatures will continue. The Climate Prediction Center outlook into early October offers little hope for significant cooling. The entire Southeast U.S. has a high likelihood of experiencing above average temperatures.

Well, at least things will cool down in the Southeast when we get to Octob... pic.twitter.com/9vurHx4Q43

The Tropics: The Atlantic Basin is rather busy. Tropical Storm Jerry has maximum sustained winds of 60mph and is set to bring gusty wind, high surf and tropical storm force winds to Bermuda on Tuesday. The storm will drift out to sea and dissipate after that. Tropical Storm Karen will cross Puerto Rico on Tuesday with 40mph and heavy rainfall leading to flash flooding. By the weekend, the storm will be stalling east of the Bahamas but it is unclear if it will stay on a northern track or slide west toward the United States. Southwest of the Cabo Verde Islands, Tropical Storm Lorenzo is set to become a powerful hurricane in the east, central Atlantic. Fortunately, this system does not pose any imminent threat to land. A weak disturbance near the Yucatan Peninsula is given a 20 percent chance of development as it drifts west toward Mexico. 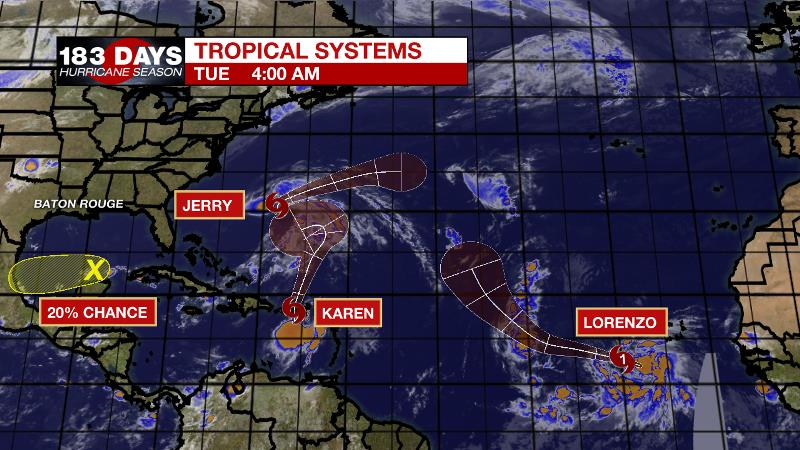 A very quiet weather pattern is forecast for the area through the week. A persistent ridge of high pressure stacked into the atmosphere will control the central Gulf Coast. Very little in the way of precipitation will be able to develop through the upcoming weekend. The ridge will become suppressed to the south and east a little bit during the latter part of the week as a trough passes to our north. During that period when the ridge weakens, isolated showers may flare up west of I-55. The best chance of this to happen would be Friday and Saturday. However, the ridge will rebuild over the weekend. Temperatures will continue to run above normal with daytime highs mainly in the lower to mid 90s.