Temperatures will gradually warm through Wednesday in advance of the next storm system. Rain chances will stay off the forecast board until Thursday.

Today and Tonight: High temperatures will slowly warm back into the low 80s on Tuesday. There will be plenty of sun, but some high clouds will begin to build as well. As a surface high pressure system scoots east, our winds will shift southeast allowing for a slightly warmer overnight with lows in the upper 50s and low 60s.

Up Next:  Clouds will thicken on Wednesday due to an approaching frontal system that will push showers and thunderstorms into the area on Thursday. Once again, some strong storms appear possible but this threat looks a bit lower than what we faced last weekend. Downpours and gusty wind along a squall line would be the main concern on Thursday afternoon. Stay in touch this week as we hone in on that part of the forecast. Really, it is the only unsettled part of the 7-Day forecast though as clear, cooler conditions will return beyond that front into Easter Weekend. 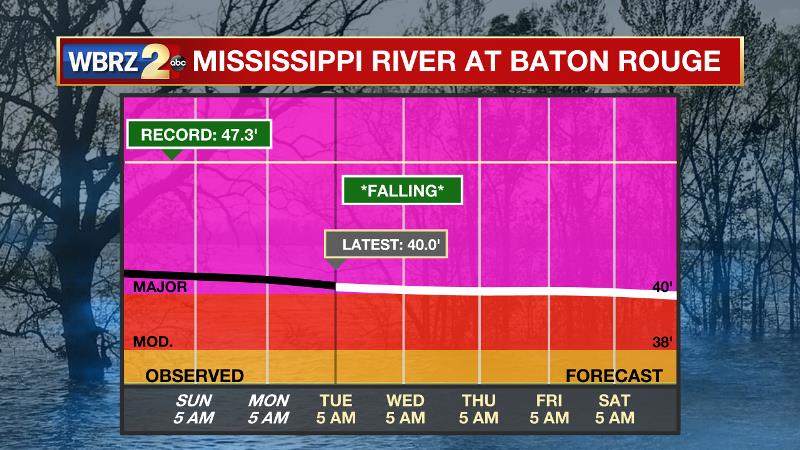 The Mississippi River: At Baton Rouge, major flood stage continues with a level of 40.0’ as of Tuesday morning. Peaking at 44.1’ on March 19, the river set its 7th highest recorded crest at Baton Rouge. In addition, at 100 days this is now the 3rd longest period above flood stage. River flooding and drainage north of the area will keep the river steady over the next several days. The high water is primarily an issue for river traffic and river islands, although some inundation will continue unprotected low-lying areas. At the current level, the grounds of the older part of Louisiana State University's campus are soggy. This includes the area around the Veterinary Medicine building, the Veterinary Medicine Annex, the stadium and ball fields. The city of Baton Rouge and the main LSU campus are protected by levees up to 47 feet. Some seepage may be noted due to the long duration of high water placing pressure on the levees. As some of the Mississippi River diverts into the Atchafalaya River, gauges at Krotz Springs and Morgan City will stay high as well. This creates backwater flooding in parts of Assumption Parish in areas such as Stephensville and around Lake Palourde. Like Big Muddy, this is expected to be a prolonged event but is not uncommon for the time of year. Read more HERE.

An area of high pressure across the central Gulf Coast will keep pleasant weather in place through Wednesday morning. By the time it reaches the Carolinas on Wednesday afternoon, onshore flow will commence allowing some moisture return and high temperatures in the 80s. In the meantime, the next storm system will develop in the Southwest U.S. Initially, clouds will lower and thicken late Wednesday but we should remain precipitation free until at least the nighttime hours. Thursday will work out to be unsettled and stormy. An upper level trough and surface low pressure will pass farther north than those of last weekend’s event and this typically leads to less favorable atmospheric wind profiles for severe weather—especially tornadoes. However, available warmth, moisture and instability mean some damaging wind gusts could occur with storms as a squall line passes the region. Ingredients for severe weather maximize around Thursday afternoon, so that is the most likely window of opportunity for storms to act up. 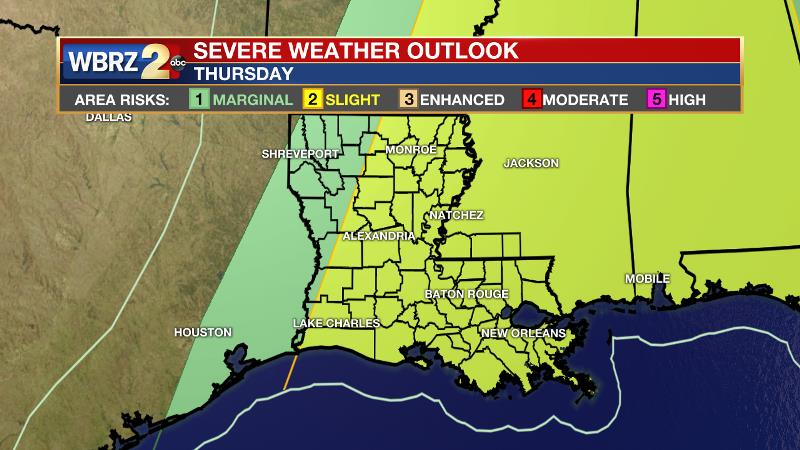 The Storm Prediction Center is going with a 2/5 “slight risk” for the entire forecast area. The system will exit on Thursday night with rain ending from west to east. Temperatures will briefly cool below average through Saturday morning but clear seasonable weather is then anticipated into early next week.