Though we have a tropical system in the Gulf, there are no major changes to the local forecast.

Today and Tonight: The morning hours will start dry before widespread showers and storms move through the area. There is no major flooding concern associated with these storms, however, there may be isolated pockets of heavy rainfall that do cause flooding. All the rain and cloud cover will keep temperatures in the 80s and at the warmest time of the day, we could reach 87 degrees. The storms will die out as the sun goes down and overnight temperatures will be near 76.

Up Next: Thick tropical moisture will be over us again on Friday and Saturday. Once the sun comes up, showers and storms will begin to form. Similar to Thursday, there is not a major flood concern, but there could be a few isolated pockets of heavy rain that cause some flooding. Temperatures will again be near 87 in the afternoon. Sunday and Monday have a shot at afternoon showers and storms about 40% coverage expected on Sunday and 50% on Monday. Temperatures will struggle to reach 90 degrees through Saturday.

Tropical Depression Eight is located by an Air Force Reserve Hurricane Hunter aircraft near latitude 26.0 North, longitude 90.3 West. The depression is moving toward the west-northwest near 7 mph (11 km/h), and a west- northwestward to westward motion is expected during the next couple of days.  On the forecast track, the center of the depression is expected to move across the northwestern Gulf of Mexico today and Friday and make landfall along the Texas coast on Saturday. Maximum sustained winds are near 35 mph (55 km/h) with higher gusts. Slow strengthening is expected, and the depression could become a tropical storm during the next 12 to 24 hours. The latest minimum central pressure reported by the Hurricane Hunter Aircraft is 1008 mb (29.77 inches).

WIND:  Tropical storm conditions are possible within the watch area by Friday night.

RAINFALL:  The tropical depression is expected to produce 3 to 5 inches of rain with isolated maximum totals of 8 inches through Monday along the Gulf Coast from Louisiana to the Lower Texas Coast, and inland through south-central Texas and the Rio Grande Valley. This rain may result in flash flooding, rapid rises on small streams, and isolated minor flooding across the west-central Gulf Coast and into portions of south Texas.

SURF:  Swells generated by the depression are expected to increase and affect much of the Texas and Louisiana coasts in a day or two. These swells are likely to cause life-threatening surf and rip current conditions. 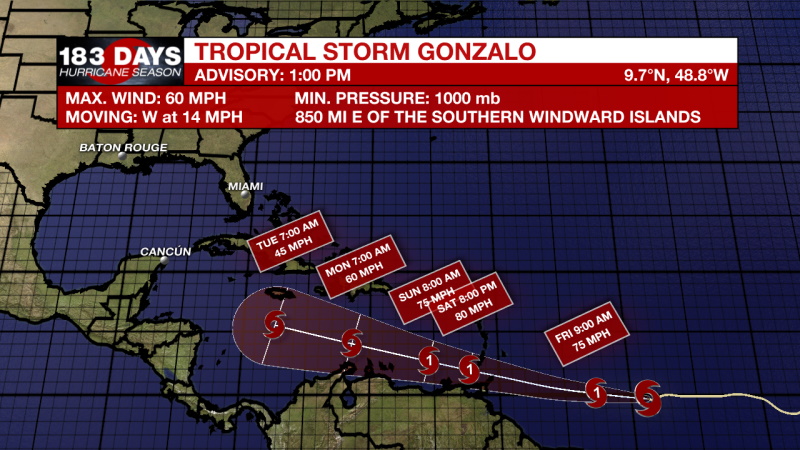 The center of Tropical Storm Gonzalo is located near latitude 9.7 North, longitude 48.8 West.  Gonzalo is moving toward the west near 14 mph (22 km/h).  A westward to west-northwestward motion with an increase in forward speed is expected through the weekend.  On the forecast track, the center of Gonzalo will approach the southern Windward Islands Friday night and move across the islands Saturday and Saturday evening. Satellite-derived wind data indicate that maximum sustained winds have decreased to near 60 mph (95 km/h) with higher gusts.  Some re-strengthening is possible during the next couple of days, and there is still a chance that Gonzalo could become a hurricane. The satellite wind data indicate that Gonzalo is an even smaller storm than previously thought, and tropical-storm-force winds only extend outward up to 25 miles (35 km) from the center. The estimated minimum central pressure is 1000 mb (29.53 inches).

WIND:  Hurricane or tropical storm conditions are possible within the watch area on Saturday.

Tropical Depression Eight is contributing to precipitable water values, putting them near extreme. With values are near 2 inches right now and could exceed 2.5 inches at times. Though the circulation of TD8 will move over Texas, we will continue to be in the area of tropical moisture through much of the weekend. With all the variables in mind, the time slot for the heaviest rain will be Friday during peak heating. A strong ridge over the central US combined with the persistent southerly flow in our area makes for heavy rain possibilities through Tuesday. Rain totals will likely be between 1-3 inches, but locally higher amounts are possible.