Thermometers will show an increasing warming trend on Thursday afternoon as some clouds spill into skies. The next appreciable chance for showers will come this weekend.

Today and Tonight: A cool Thursday morning will translate into a seasonable afternoon. High temperatures will reach the upper 70s beneath partly sunny skies. Winds will begin to shift to the southeast. Overnight low temperatures will stop in the low 60s.

Up Next: The week will end with a return to the 80s and increasing clouds. While a spotty shower is possible, chances are low.  A weak front will stall in western Louisiana by Saturday and a modest upper level disturbance will roll over that front to kick out showers and thunderstorms. 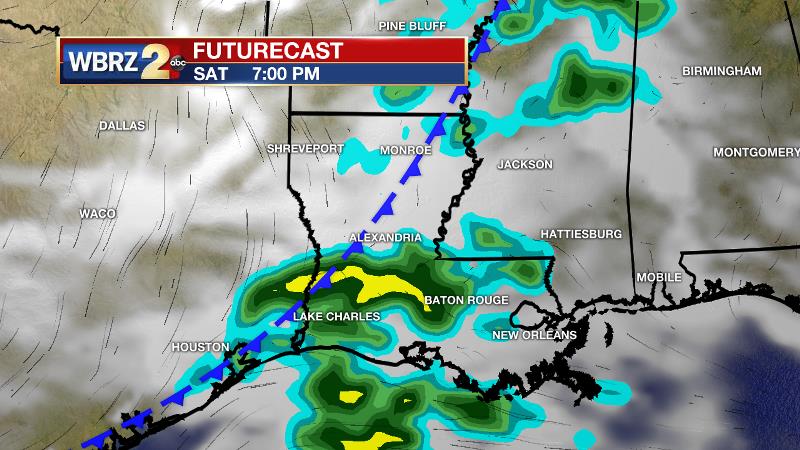 In the absence of upper level energy, rain chances will go down on Sunday. The weak front will not push through the local area and therefore, temperatures will continue to warm into early next week allowing some thermometers to take another run at 90 by Tuesday or Wednesday. In step with this thinking, the Climate Prediction Center is showing a high probability of above average temperatures.

The Mississippi River: At Baton Rouge, major flood stage continues with a level of 40.4’ as of Wednesday morning. Around April 10, the river is projected to crest near 43’. The high water is primarily an issue for river traffic and river islands, although some inundation will continue for a few spots north and south of Baton Rouge that are not protected by levees. Unprotected low-lying areas will be flooded and agricultural operations will be impacted on the west side of the river. The grounds of the older part of Louisiana State University's campus become soggy. This includes the area around the Veterinary Medicine building, the Veterinary Medicine Annex, the stadium and ball fields. The city of Baton Rouge and the main LSU campus are protected by levees at this level. This comes after a year where the gauge at Baton Rouge spent a record smashing run of 212 consecutive days above flood stage between January and August. Peaking at 44.1’ on March 19, 2019 the river set its 7th highest recorded crest at Baton Rouge. The level is also high in New Orleans As the U.S. Army Corps of Engineers considers opening the Bonnet Carre Spillway. From May to July 2019, the Spillway was open for a record 79 consecutive days during its second opening of the year. If the Spillway is opened in 2020, it will mark the fourth time in five years and the 15th time since being built in 1931.

As an upper level ridge of high pressure bounces east on Thursday, a weak disturbance will cross the area with little fanfare due to limited deep moisture return. Still, some clouds will be able to develop. A largely zonal flow pattern in the upper levels will continue through the weekend. So even as a weak front develops in the region, the upper winds will not be conducive to a frontal passage. However, as areas of positive vorticity (disturbances) move over the front some pockets of showers and thunderstorms will be forced. The best chances for rain will be Saturday through Saturday night and again on Monday. Severe weather is not expected. Temperatures will remain above average.