The end of the week will bring moderating temperatures. A strong cold front will put an end to that trend over the weekend. 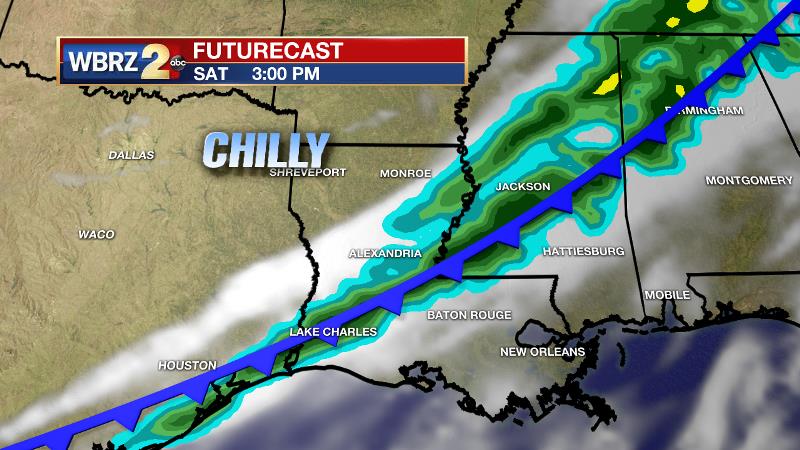 Up Next: Similar weather is expected for the end of the week, with perhaps just a touch of humidity. The next cold front will push into the region on Saturday. It will be a fast mover but may bring some showers on Saturday—especially in the afternoon and evening. A significant drop in temperatures will occur by Sunday as high temperatures struggle for the mid 60s despite sunny skies. The coldest air of the extended period is expected on Monday morning with many thermometers achieving the upper 30s. A round of showers is possible on Tuesday or Wednesday. While a bit far out to say with high confidence, seasonable temperatures and dry conditions appear to be in store for Thanksgiving. 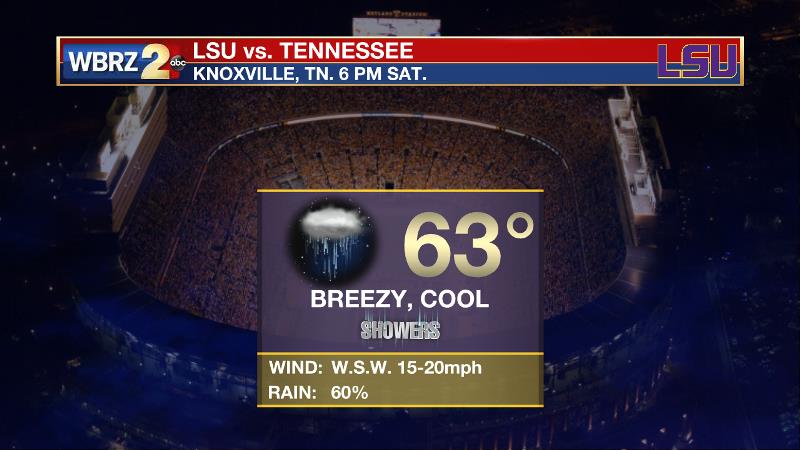 In Knoxville, the LSU Tigers will play in cool, breezy conditions on Saturday evening. Kickoff temperature will be in the low 60s with a 60 percent chance of showers.

Highs will be creeping back up for the end of this week as an upper trough to the east moves out into the Atlantic Ocean. The next chance of rain and another cool down will be this weekend as a cold front moves toward the area. Forecast models are coming into slightly better agreement as to the specific timing of this passage. Very little rainfall is expected over the afternoon and evening hours as this front speeds through the region. This cold front will be leading the charge on an extended stretch of below average temperatures. A deep trough will dig into the Eastern United States by Sunday and persist for several days. 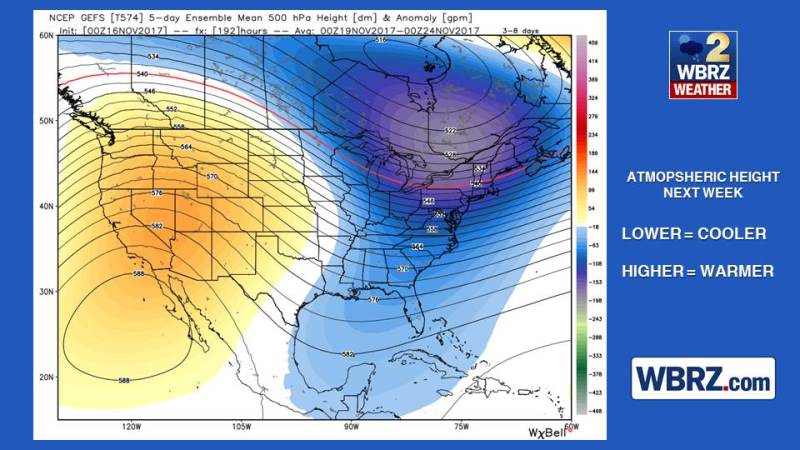 The trough looks quite anomalous for the time of year, meaning temperatures could end up well below average with the coldest period occurring on Monday morning with low temperatures in the upper 30s. It appears that a trough will remain positioned over the Southeast, with a ridge in the west through much of next week. However, confidence is low in the extended forecast. Models have been showing a shortwave trough diving down the eastern flank of the ridge, which could bring unsettled weather in the middle of next week. At this time, the GFS and ECMWF dig this shortwave trough into Louisiana by Tuesday. Positive vorticity advection leeward of the trough and moisture transport from a southwesterly mid-level flow could combine to produce a period of rain, followed by another cold front. Near to slightly below average temperatures then seem to be a reasonable expectation through much of next week, including Thanksgiving, due to a general trough in the east. Ensemble model output is suggesting highs in the mid 60s and lows in the mid 40s.