A new season brings a nice, new pattern. Wait until you see how long this will stick around!

Today and Tonight: Another gem will be offered up on Thursday. In response to sunshine and winds shifting easterly, highs will make into the low 70s. Skies will stay clear at night with lows squeaking into the upper 40s.

Up Next: As southerly winds return on Friday, afternoon high temperatures will make back to or above average in the upper 70s. Sunshine will remain the dominant feature in area skies. Over the weekend, continued onshore flow will allow highs to warm a few more degrees each afternoon with 80s expected for Saturday and Sunday highs. A few clouds may alas develop. Some humidity will be noticed by the end of the weekend but that moisture in the atmosphere is not likely to produce a shower until at least Monday and possibly later than that. 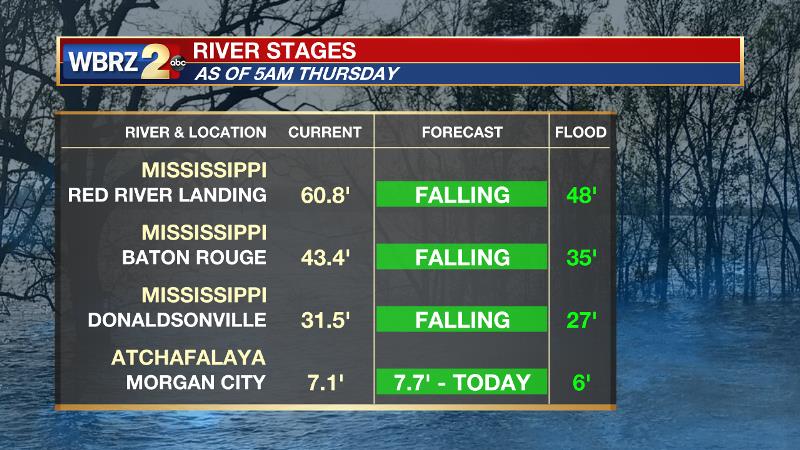 The Mississippi River is beginning to fall. However, the water level will not fall fast and the prolonged period of pressure on the levees could result in additional seepage and boils. Land may continue to be soggy around the Angola farms and by the LSU veterinary complex with ongoing river island inundation and industrial restrictions. Levees protect highly populated areas around the river, including Baton Rouge. In Morgan City, the Atchafalaya River will crest over the next few days. Give the projected level of just below 8 feet, some water may make it into buildings at the foot of Ann Street and in Berwick on the river side of the flood walls. Backwater flooding could occur in Stephensville as well.

As a deep trough pushes off the East Coast, surface high pressure will be able to migrate from the Midwest to the Southeast. Slow temperature moderation will begin on Thursday afternoon and continue into the upcoming weekend. By Friday afternoon, the surface high is expected to be east of the local area, which will welcome onshore flow and rising dew points. Temperatures will go above average Friday afternoon and stay that way through the weekend. A mid-level ridge axis will pass across the area on Sunday, maximizing high temperatures in the mid 80s Sunday and Monday afternoons. Several days of return flow will allow dew points to reach the 60s keeping low temperatures in that range as well, so some humidity may be noticed by the end of the weekend too. Overall, a ridge in the east with a trough in the west is expected to hold into the middle of next week. This pattern is expected to stall out a storm system just northwest of the local area, but associated fronts may be close enough to produce a shower or two on Monday and Tuesday. With an absence of vorticity maxima, rain chances will be minimal. Forecast models really do not show any sign of more substantial, widespread rain until the middle or end of next week.