There will be a ramp up in showers and thunderstorms as we move through the week. Wednesday and Thursday in particular, look to have potential for flooding issues.

Next 24 Hours: Overnight, skies will turn mostly clear with low temperatures near 74 degrees.  Tuesday, high temperatures will push toward 90 degrees with some early sunshine. Scattered showers and thunderstorms are anticipated during the afternoon hours.

We are often talking about those rain chances or percentages on the forecast board often seen during the warm season. Here is a quick reminder about what those mean for the WBRZ Weather 13 Parish, 3 County forecast area.

30-60% - Scattered: part to half of the area receives measurable rain

60-100% - Widespread: almost all of the area receives measurable rain

Keep in mind, those chances tell nothing about timing. For instance, 100% DOES NOT mean it will rain all day. We will be sure to provide information in our forecasts as to when you can expect rain when chances are on the board. MORE: https://www.wbrz.com/news/a-chance-to-remember

Up Next: Wednesday and Thursday will be the time period to watch this week. A very unstable and moist, tropical air mass will combine with a weak trough of low pressure to support torrential thunderstorms both days. Repeated rounds of thunderstorms could cause some areas to oversaturate and therefore have poor drainage flooding issues. On average, most of the forecast area will pick up about three inches of rain, but some isolated amounts doubling that are possible. At this time, river flooding is not a concern but it is worth watching if rainfall overachieves. Forecast confidence is lower into the weekend as to whether or not a very weak front moves through and dries the atmosphere enough for some relatively drier days in terms of rainfall. CLICK HERE for your detailed 7-Day Forecast. 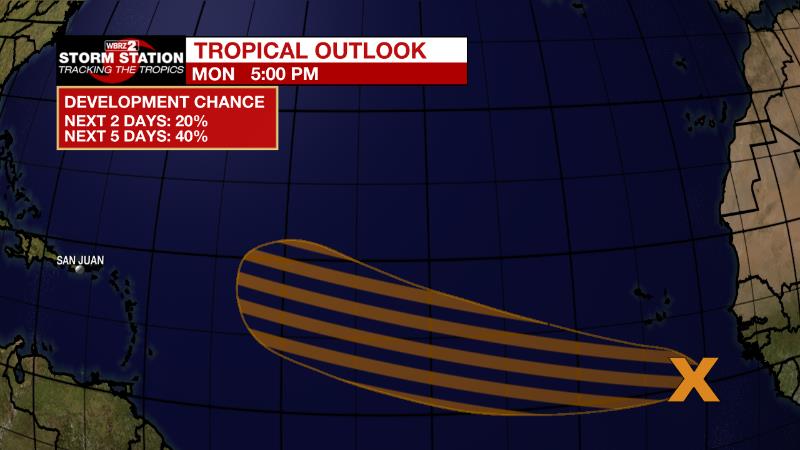 The Tropics: There is a large area of showers and thunderstorms over the far eastern tropical Atlantic south of the Cabo Verde islands associated with a tropical wave. Environmental conditions appear conducive for gradual development over the next several days while it moves westward to west-northwestward at 15 to 20 mph across the eastern and central tropical Atlantic. There is a 40 percent chance that a tropical depression could form by the middle to latter portion of this week before environmental conditions become less favorable by this weekend. 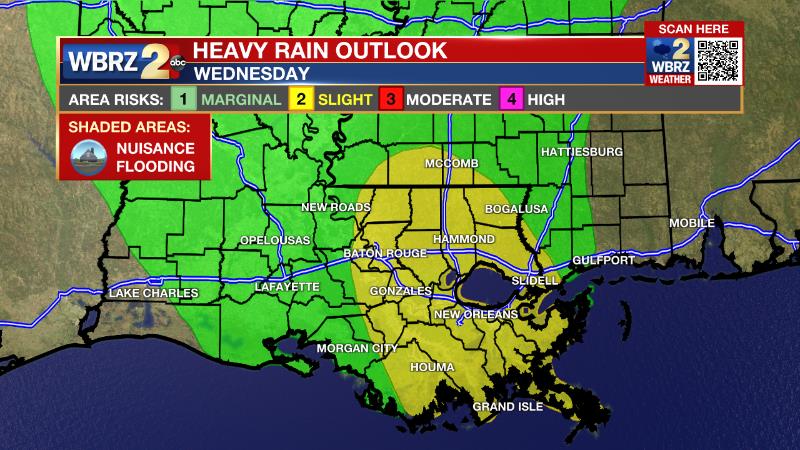 The Explanation: An upper level trough of low pressure with a very moist, tropical air mass will move into the region on Tuesday. Our value of assessing moisture, known as precipitable water, will move from an already above average 1.8 inches to 2.2 inches. Both Tuesday and Wednesday afternoons, scattered showers and thunderstorms will break out as temperatures warm. With very weak steering winds in place, storms will rain themselves out, possibly leaving behind a few inches in isolated locations. The risk for heavy rain and flooding problems will increase on Thursday and the Weather Prediction Center has included the Baton Rouge Metro Area and points east in a risk for excessive rain. A deepening upper level trough of low pressure in the Northeast U.S. will push a weak surface front toward the Gulf Coast. This boundary will provide a focus for multiple rounds of showers and thunderstorms to develop. With a few rounds possible, a weak steering winds remaining, some unlucky spots could pick up many inches of rain on Thursday alone. If these same areas are saturated from early week rain, flooding issues could easily develop. By Friday, the upper level trough of low pressure and associated deep moisture will drift west, placing the local area on the eastern fringe of an upper level ridge of high pressure. This switches the pattern around. A slightly drier atmosphere and northerly steering winds will cause showers and thunderstorms to fire up later in the day. When thunderstorms develop in a slightly drier air mass, storms are more capable of gusty wind, rather than heavy rain. Additionally, later thunderstorms will also mean more time for warming and high temperatures well into the 90s.