BATON ROUGE - Drake Davis, a former LSU wider receiver, is being held on bond after yet another incident in which he allegedly attacked a dating partner.

Deputies say the arrest happened around 3:30 a.m. July 28 after they were dispatched to investigate a domestic disturbance at 10201 Park Rowe Ave. A witness on the scene claimed that Davis and the victim, Davis' girlfriend, had gotten into an argument that turned physical. The witness showed deputies a cell phone video they had taken of the incident. 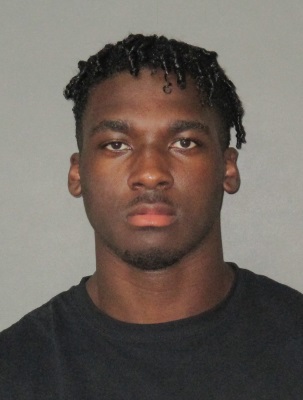 According to the arrest report, the victim at first claimed that nothing occurred between her and Davis. But after deputies informed her that they received a video from a witness, she admitted that Davis grabbed her by her arms and pushed her after he discovered that she was talking with another man.

The victim told deputies that she was not injured.

Davis admitted to investigators that he had learned that the victim was in contact with another man and he had gone to the residence to speak to her. He stated that while they were talking, he grabbed the victim by her arms and pushed her.

Davis also stated that he did not hurt the victim and apologized for the incident. Davis was arrested booked at East Baton Rouge Jail where he is now being held on a $20,000 bond.

Drake Davis's mother took to Facebook with her frustration on the arrest posting a 11 minute live video along with his girlfriend stating he did nothing wrong.

Davis has a long history of violent altercations with domestic partners. He was last in court on July 16 and was scheduled to return to court in January of 2020 due to similar charges.

Davis allegedly beat his then-girlfriend between April and September 2018. Davis was first arrested in August of 2018 after he allegedly punched the victim so hard that she suffered broken ribs. Davis was later released on bond under the condition he obeyed a curfew and stayed away from the victim.

He was arrested a second time in September of 2018 after he was accused of violating that court order and seeking out the victim again. He was then booked on new battery charges after he allegedly struck and strangled the woman before ripping her earring off.

Davis was additionally booked on two counts child pornography charges after investigators found lewd photos of juveniles in his text messages. Police say they stumbled across the videos while investigating the abuse allegations in September of 2018.

According to his mother, Davis was planning on leaving the state for college on Monday. It is unclear at this time if this will happen.