Where did fall go? Apparently to the north

There won’t be much excitement in the 7-Day Forecast. There also won’t be much change in temperatures, meaning it will feel more like late summer than fall. While a shower could stir up through Wednesday, decent rain chances are not expected until Thursday.

The Next 24 Hours: Evening skies will be mostly clear but after midnight some fog may develop—especially near the Mississippi River. Lows will stop in the upper 60s. On Tuesday, dissipating fog and low clouds will give way to another mostly sunny afternoon with high temperatures in the mid 80s.

After That: A repeat is in store for Wednesday. By Thursday, a weak disturbance moving across the northern Gulf of Mexico in conjunction with a weak upper level disturbance moving in from the west will combine to bring a isolated to scattered afternoon showers. On Friday, a front will push into the area and grab some of the tropical moisture in place to put out scattered showers and thunderstorms. While the front will not change temperatures or humidity much, the two disturbances and the front will depart to lower rain chances once again over the weekend. If you are looking for cooler air, next Tuesday or Wednesday seems to be the earliest possibility. 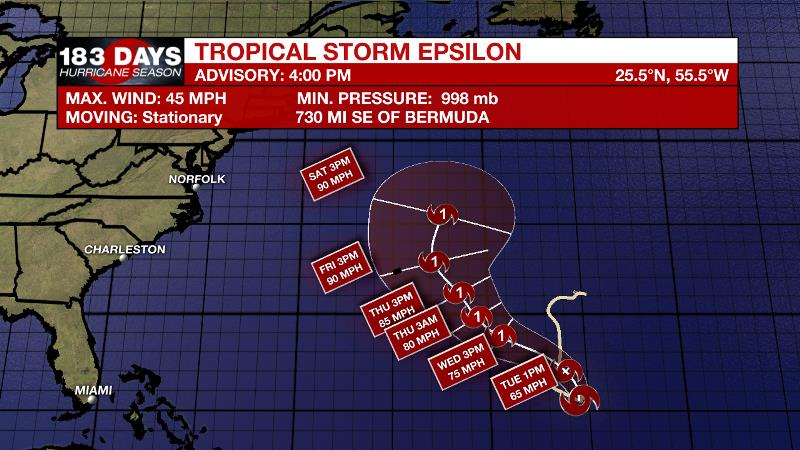 The Tropics: Tropical Storm Epsilon has formed over the central Atlantic. As of 4pm Monday it was nearly stationary with maximum sustained winds of 45mph. A slow northwest turn will accelerate by the end of the week and Epsilon is forecast to approach Bermuda near hurricane status on Thursday.

A trough of low pressure has formed over the western Caribbean Sea, which extends northward across western Cuba.  The associated shower and thunderstorm activity is located along the northern portion of the trough axis where upper-level winds are not conducive for significant development so formation chances are just at 10 percent.

The Explanation: While Tropical Storm Epsilon will not threaten the local area, it will serve as a stopgap to the upper level pattern and keep any fronts from coming into our region for the next several days, so there’s that. A weak tropical wave moving west cross the northeastern Gulf of Mexico will combine with a weak upper level trough advancing from west to east across the southern third of the country will combine to create isolated to scattered showers and thunderstorms Thursday and Friday. Neither day will bring substantial coverage or amounts. Well above average temperatures will continue through the middle of the week and even as showers enter the forecast Thursday and Friday, the numbers will only fall by a few degrees and stay above normal. As the two aforementioned disturbances fall apart by the weekend, expect drier conditions.

With highs running 4-6° above average today and likely staying that way through the weekend, we have to look into the middle of next week for our next shot at "fall-like" temps. ?? pic.twitter.com/JlHBwW5y40

A cold front may finally enter the area by about Tuesday of next week with some showers and thunderstorms followed by a marked cool down. Since this is beyond the 7-Day Forecast, there is still plenty of time to hammer out timing and strength details.