Late summer fare is on the menu for Labor Day Weekend cookouts. A week from now, we may be enjoying our first taste of fall with lower humidity and slightly cooler temperatures.

The Next 24 Hours: A nearly full moon will be plainly visible overnight as low temperatures stop in the mid 70s. For your Saturday, partly sunny skies will lead highs into the low 90s. Isolated showers and thunderstorms will pop during the afternoon but they should not last long and many locations will miss rain.

After That: A weak front will push through the area on Saturday night, enough so that low temperatures could dip into the low 70s into Sunday. Behind that front, that not zero, rain coverage will be very low through Tuesday. A cold front will sit off to our northwest on Wednesday and that may allow more humidity to pool and trigger showers and thunderstorms. The model guidance has been wavering on bringing this front through the area; there is now agreement that it will happen, just slower than initially thought. The boundary should chug on by from northwest to southeast on Thursday, accompanied by showers and thunderstorms. Much lower dew points, and therefore lower humidity, will follow into Friday. By next weekend, high and low temperatures could be about 5 degrees below seasonal averages (90/70). 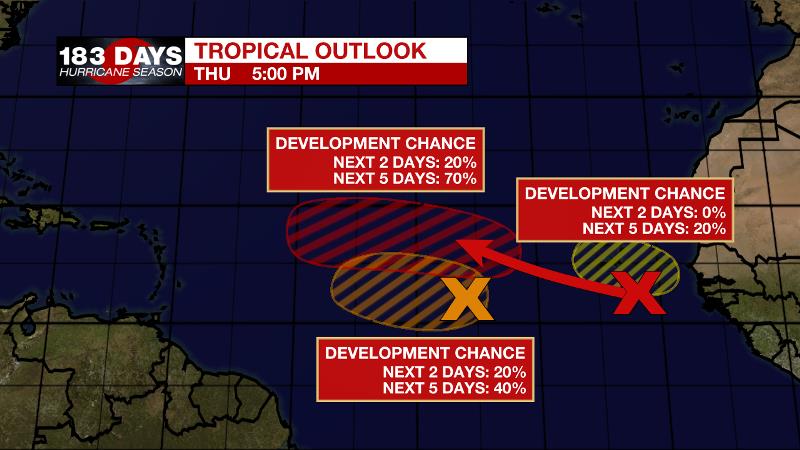 The Tropics: A tropical wave and area of low pressure are producing a large area of disorganized showers and thunderstorms just west of the Cabo Verde Islands.  There is an 80 percent chance that a tropical depression will form late this weekend or early next week when the system reaches the central tropical Atlantic. A nearly stationary area of low pressure is positioned midway between the west coast of Africa and the Windward Islands. There is a 30 percent chance of some development before it merges or interacts with a large tropical wave to its east. Yet another tropical wave is forecast to move off the west coast of Africa on Sunday. Gradual development of this system is then expected, and there is a 60 percent chance that a tropical depression could form by the middle of next week while it moves westward over the eastern tropical Atlantic.

The Explanation: A Bermuda ridge of high pressure has led to dry and sinking air across the central Gulf Coast for several days. A broad trough will dig into the Eastern U.S. over the weekend and erode the ridge. An area of lower pressure will open up between that ridge and another in the Western U.S. Those changes should result in enough instability for isolated, afternoon convection on Saturday. A weak front will pass through the region, lowering atmospheric moisture on Sunday leading to a drier afternoon and a slight reduction in low temperatures. A subtle weakness between two ridges will battle against some drier air aloft to yield spotty showers Monday and Tuesday. A deep upper level trough will move into the southern Plains by Wednesday region. This will push an associated cold front into the region Wednesday night producing scattered showers and thunderstorms. Thursday into Friday, the upper level low will get unusually deep as it centers north of the local area. However, this deepening will help guide a fairly potent early September cold front through. Forecast model guidance indicates a significant drying trend—dew points falling out of the 70s and into the 50s—which would mark the driest air since mid-May. While this would likely cause temperatures to drop by a few degrees, if the current trends hold, they could drop by 5-10 degrees.