Since Tuesday, 1-2 inches of rain has fallen across the 13 Parish, 3 County Forecast Area with isolated higher amounts up to 5 inches in parts of East Baton Rouge and Ascension. Rain will not disappear, but lower coverage is expected Thursday and especially Friday.

Next 24 Hours: Another active day of rain will be left behind for a quieter night. Skies will partially clear and low temperatures will stop in the low 70s. Humidity will still be elevated on Thursday and high temperatures will bump into the mid 80s with some early sun. The active pattern in place over the last few days will start to break a bit, but daytime warming will be capable of kicking out scattered, afternoon showers and thunderstorms. Any rain that develops is not expected to be as persistent as Tuesday and Wednesday.

Up Next: On Friday, expect partly to mostly sunny skies with only an isolated shower or thunderstorm. The forecast for the weekend is a bit tricky. All signs point to enough ingredients staying around for a few showers and thunderstorms to develop each day, Saturday through Monday. A weak upper level disturbance could come by just in time to trigger some activity Saturday evening—a trend that we will monitor closely for the LSU vs. Auburn football game. Humidity will stay in place and temperatures will be near average. A cold front is anticipated on Tuesday and this will bring an end to the rain chances and lower temperatures and humidity for at least a few days next week. CLICK HERE for your full 7-Day Forecast. 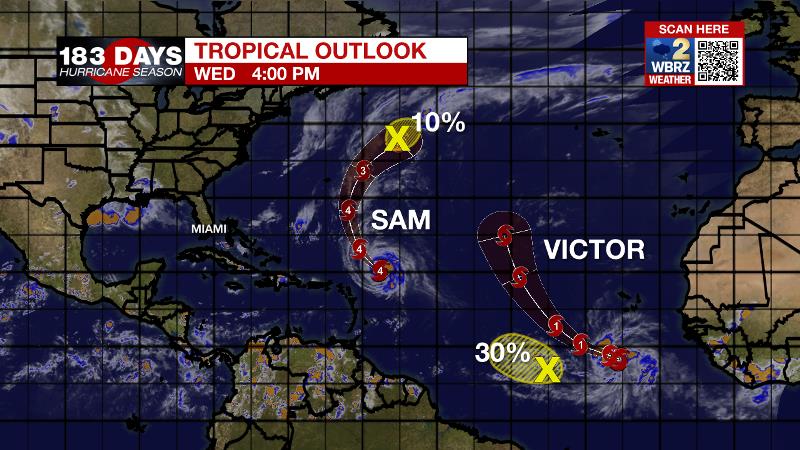 The Tropics: Category Four Hurricane Sam has passed well north and east of the Lesser Antilles. The storm will holds its strength for several more days while also missing Bermuda to the east. Tropical Storm Victor developed on Wednesday near the Cabo Verde Islands. The storm is expected to become a hurricane by the end of the week and remain over the open, Eastern Atlantic Ocean. A tropical wave south and west of Victor in Atlantic Ocean has a 30 percent chance of formation as it drifts west-northwest over the next five days. For the latest tropical forecasts, advisories and information, visit the WBRZ Hurricane Center as we navigate all 183 Days of Hurricane Season.

The Explanation: On Thursday, an upper level trough of low pressure will begin to be nudged back to the northwest by a strong, narrow upper level ridge over the center of the country. Since the upper level trough of low pressure has been responsible for the wet weather, it having a little less influence on the local atmosphere will cut down on the coverage and duration of showers and thunderstorms. Since moisture never really lessens, daytime warming should still be able to kick out scattered showers and thunderstorms, especially west of I-55 where the trough will still have some influence. While upper level disturbance spinning around the trough were very evident Tuesday and Wednesday, these features, if any, will be very subtle on Thursday, which makes the rain coverage forecast a bit tricky. The upper level ridge will be the dominant feature on Friday leading to a warmer, sinking motion in the atmosphere and therefore a mainly dry day. Another upper level trough of low pressure will move east across the country on Saturday and start to break down the ridge. Both global forecast models capture this feature although some display it to be more potent than others do. The overall trend is a bit weaker and so the mention of late day showers and thunderstorms on Saturday has been trimmed from scattered to isolated. The area will lie beneath the axis of the trough on Sunday and so with daytime warming, scattered showers and thunderstorms are expected. 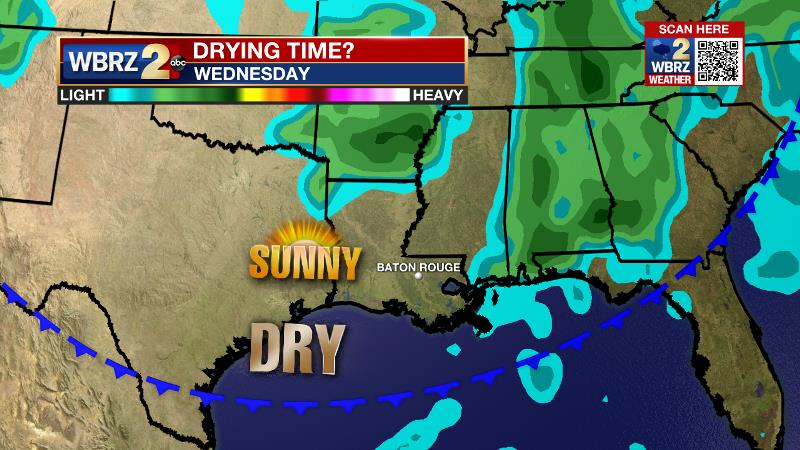 The trough will amplify and slide southeast on Monday and Tuesday pulling an associated surface cold front into and eventually through the area. While there are some timing differences, a drier air mass is expected to arrive sometime on Tuesday ending the unsettled, wet weather pattern and ushering in seasonable temperatures with lower humidity for the middle of next week.