A subtle shift in wind direction will return us the to “regularly scheduled summer weather programming” by Saturday. At this time though, there are no washouts in the forecast.

Today and Tonight: Onshore flow will allow some humidity to build on Friday afternoon with thermometers making a run for 90 degrees once again. The slow advance of moisture should mean that most stay dry with mostly sunny skies. Overnight will be considerably less comfortable with readings staying in the 70s.

I am not able to make my lips go upside down like that... but the emoji can, and will by tomorrow morning. #Humidity pic.twitter.com/R6Z65qR6gZ

Up Next: By the weekend, enough moisture should be available for daytime warming to force out afternoon showers and thunderstorms with a slightly better chance on Saturday. Father’s Day will not be totally dry around southeast Louisiana and southwest Mississippi but outdoor plans should be in fine shape. A consistent weather pattern will carry through the middle of next week with highs near 91, lows near 74 and isolated to scattered showers and thunderstorms—mainly during the afternoons. 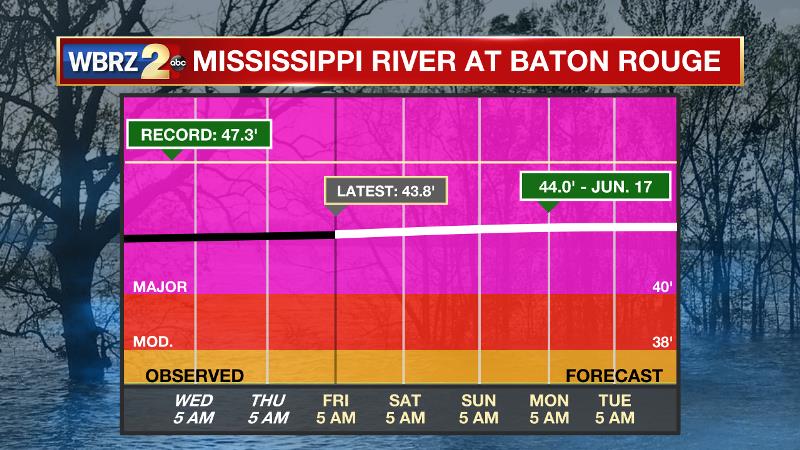 The Mississippi River: At Baton Rouge, major flood stage continues with a level of 43.8’ as of Friday morning. Peaking at 44.1’ on March 19, the river set its 7th highest recorded crest at Baton Rouge. At 160 days, this year marks the longest period above flood stage at Baton Rouge. The current forecast is for the second crest of 44.0’ to occur Monday. The Morganza Spillway opening has been delayed indefinitely and may not be necessary thanks to water levels running lower than originally forecast. On the Mississippi River, the high water will remain an issue for river traffic and river islands, although some inundation will continue for unprotected low-lying areas. The city of Baton Rouge and the main LSU campus are protected by levees up to 47 feet. Some soggy areas and seepage may be noted due to the long duration of high water placing pressure on the levees. As some of the Mississippi River diverts into the Atchafalaya River, gauges at Krotz Springs and Morgan City will stay high as well. This creates backwater flooding in parts of Assumption Parish in areas such as Bayou Chene, Stephensville and around Lake Palourde.

The anomalous upper level trough dug into the Eastern U.S. will lift northeast, exiting the country on Friday. A surface high pressure system will slide east from the Ohio River Valley to western Atlantic Ocean on Friday and southerly winds will return by afternoon. This shift will start to bring dew point temperatures up a bit; however it is expected to remain mostly sunny and dry with highs warming to around 90. The advancing moisture will cause warmer lows in the low 70s Friday night. By Saturday, the Capital Area will transition back to more typical summer conditions with heat, high humidity and a chance of afternoon showers and thunderstorms. This pattern should really cozy in for days to come as an expansive surface high will be centered off the Mid-Atlantic Coast which will maintain southerly surface winds across the central Gulf Coast. A series of upper level disturbances moving across the region will mean some days bring higher coverage in showers and thunderstorms than others. However, these weak perturbations in the jet stream are difficult to detect beyond 24 hours in advance.