Weak front and Eta moving into a dry atmosphere

There is not much excitement in the weather for this week, yet there in plenty of anticipation. We are watching and waiting to see what happens with Tropical Storm Eta in the eastern Gulf of Mexico.

The Next 24 Hours: The mild nights have returned and lows will stop in the mid 60s into Tuesday. Do expect some clouds up top. Mostly cloudy skies are expected through Tuesday and the approach of a weakening cold front could give rise to isolated, afternoon showers. However, coverage is expected to stay low with only 20 to 30 percent of the area collecting measurable rain. Highs will get back to about 80.

After That: A weakening cold front will stall and dissipate over the local area. While the atmosphere may dry a bit thanks to this boundary, do not expect much change in temperatures. Wednesday through Friday will be partly to mostly sunny with highs in the low 80s and lows in the low 60s. If Tropical Storm Eta can stay intact, a weak system could drift toward the northern Gulf Coast this weekend to create some showers and thunderstorms. However, the risk of an intense tropical system is very low. CLICK HERE to view your complete 7-Day Forecast. 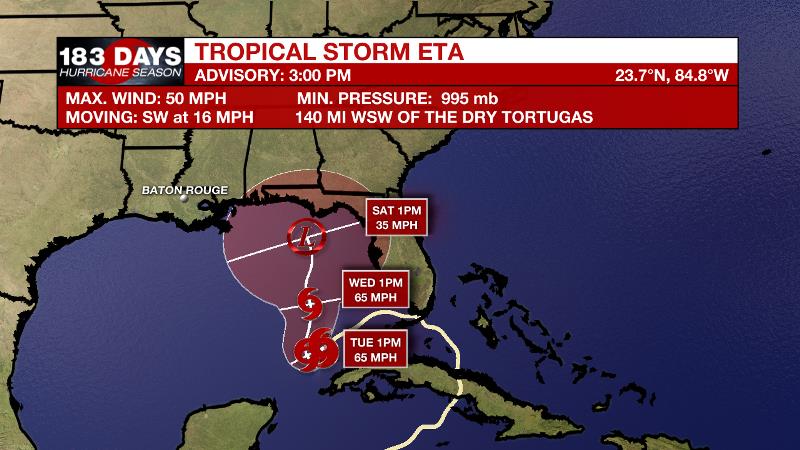 The Tropics: Tropical Storm Eta has been poorly organized over the eastern Gulf of Mexico. A large pocket of dry air is affecting the system on three sides, shrinking the storm and making it very difficult for further organization at this time. Eta will continue drifting to the southwest over the next day. By Wednesday, Eta is expected to stall over some warm water where a bit of strengthening could occur, but continued dry air will prevent rapid intensification. Into the end of the week, there remains a good deal of uncertainty with regard to strength and track. The track scenarios range from the Louisiana/Mississippi border to western Florida. The strength scenarios range from depression to hurricane. While hurricane seems unlikely given the expectation for more dry air and wind shear—a good rule of thumb is the farther west, the weaker and the farther east, the stronger. For Louisiana, that means if the area has to deal with Eta, it will not be a very organized system. 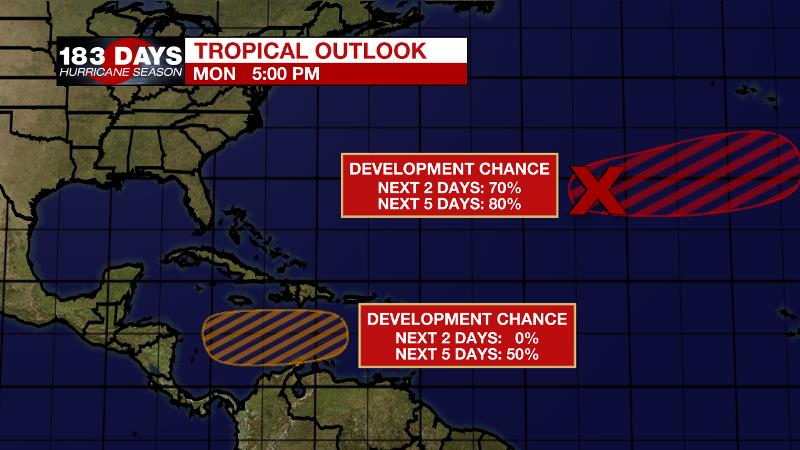 Shower and thunderstorm activity associated with a low pressure system several hundred miles southwest of the Azores has become better organized during the past several hours. Satellite wind data suggested that the system had not yet become distinct from a front in the area; however, it will likely become non-frontal soon. There is an 80 percent chance that a tropical or subtropical storm will form over the next day or two while the system moves eastward over the northeastern Atlantic Ocean.

Another tropical wave is forecast to move over the central Caribbean Sea. There is a 50 percent chance that a tropical depression could form over the next 5 days.

The Explanation: A slight surge of moisture into the atmosphere ahead of an approaching cold front could serve to trigger a few showers Tuesday and Tuesday night. This front will become diffuse over the local area and by Wednesday afternoon, seasonably warm and drier conditions will persist.

Tropical Storm Eta is expected to continue to drift north into the northeastern Gulf towards the Florida panhandle while gradually weakening to a tropical depression. There is a lot of uncertainty in the track since there are models that have tracks across almost all of the Gulf. For now, the combination of another approaching cold front and moisture from Eta is expected to bring increased rain chances on Saturday. At this time, those rain chances have been kept low due to high uncertainty in Eta’s track. It is still possible the system will be far enough east that the area remains dry. One bit of good news, it does not look like the local area will have to contend with a substantial tropical event.