A pattern switch is underway. Southeasterly winds will result in warmer than average temperatures through the middle of next week. Additionally, added moisture in the atmosphere will bring plenty of clouds and occasional showers.

Today and Tonight: High temperatures will check in noticeably above average on Friday in topping out near 66 degrees. Skies will be mostly cloudy and a spotty shower is possible—especially near the coast. Overnight lows will bottom out near 51 degrees as clouds stick around.

Up Next: An upper level disturbance will lead to isolated showers across the area for part of the weekend. This possibility has continued to look lower and lower over the last few days, so certainly do not expect a washout. Only a few spots will gather some light rain, many will miss. This storm system will not be accompanied by more cold air and temperatures will stay above average into early next week. In fact, 70s appear plausible several days. If sunshine can overcome clouds, one or two spots could have a run at 80 degrees! Though not high, daily rain chances will stay on the board until the next front clears the area around Thursday or Friday.

A surface high pressure will shift into the eastern U.S. resulting in southeast winds and moderating temperatures. In the upper levels of the atmosphere, a west to east jet stream will result in fairly active, but low impact weather. A series of fast moving disturbances, or shortwave troughs, will result in showers from time to time. The most well defined, albeit weak disturbance is expected to cross the area during the middle of the weekend. Positive vorticity advection ahead of this wave will tap into modest mid-level moisture to produce isolated showers. Model guidance points to Saturday night and Sunday morning as the most likely window for some rain, but coverage will remain rather low with many locations missing altogether. Additional, more poorly defined disturbances will be difficult to time until about a day ahead in advance. However, do expect plenty of cloud cover and isolated to scattered showers to remain in the forecast Monday through Wednesday. One week rain totals are nominal; the Weather Prediction Center points to under an inch over the whole stretch. 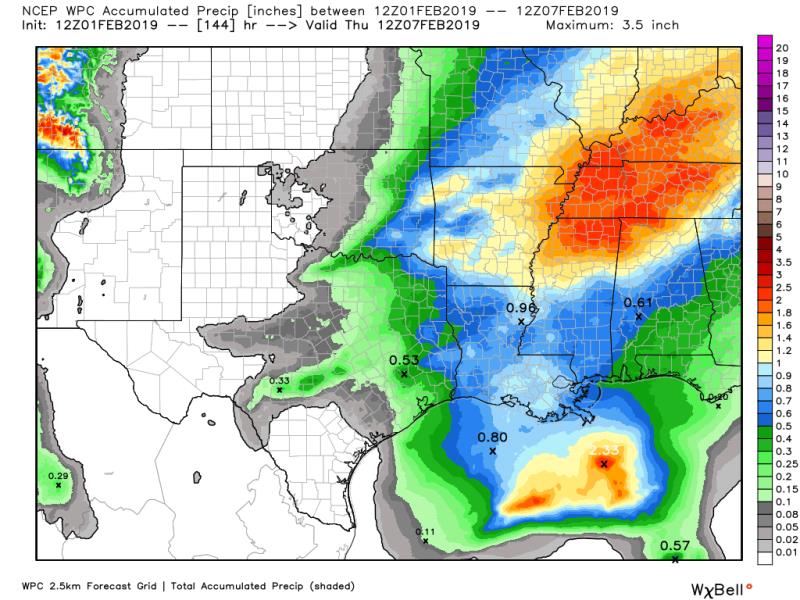 Even though sunshine may be difficult find, onshore flow will cause temperatures to continue warming. Highs and lows will be about 15 degrees above average through the middle of next week, with highs well into the 70s. The next cold front is expected to bring some rain, thunderstorms and cooler temperatures by the end of next week.