3 years 9 months 1 week ago Wednesday, August 08 2018 Aug 8, 2018 August 08, 2018 2:12 PM August 08, 2018 in News
Source: WBRZ
By: Trey Schmaltz
Share:
A south Florida sheriff's department used the computer-generated sketch, left, to try to identify the remains of a hiker found at a camp site. Facebook users shared the image on the right with deputies purportedly of the man when he was alive.

NAPLES, Florida – Facebook comments on threads related to an unidentified man found dead in a hiking camp deep in the south Florida swamp suggest the mysterious hiker is from Baton Rouge.

Sheriff’s deputies in Collier County, Florida, have been corresponding with Facebook users for days after the department posted a computer-generated image of a man found dead in a tent in Big Cypress National Preserve on July 23.

“He had no identification. It appeared that he had been living or hiking in the preserve,” deputies wrote in their Facebook post that has spread like wildlife among hikers’ pages.

In numerous Facebook threads, other hikers said they saw a man matching the likeness up and down the eastern United States. One person suggested they had a conversation about the man being a native of Baton Rouge.

Deputies in Florida did not suggest in their post where the man may be from. On numerous public messages with hikers, deputies repeatedly said the case is under investigation and they’re hoping someone will recognize the man and report his identity.

“We have received some tips that the man could have been from Baton Rouge. Since we don’t have him identified we can’t make a definitive connection to any place,” the sheriff’s office said in a statement to WBRZ Wednesday afternoon.

Nevertheless, they hope the image will be shared and lead to an identity.

Hikers also shared images of who they believe the man could be. The photos were taken while he was alive.

No one is sure of his real name since he only identified himself on trails with an alias - “Mostly Harmless” or “Denim.”

People wrote in addition to having been told he was born in Baton Rouge he also told stories about him most recently living in the New York area where he was a programmer before he decided to start hiking. 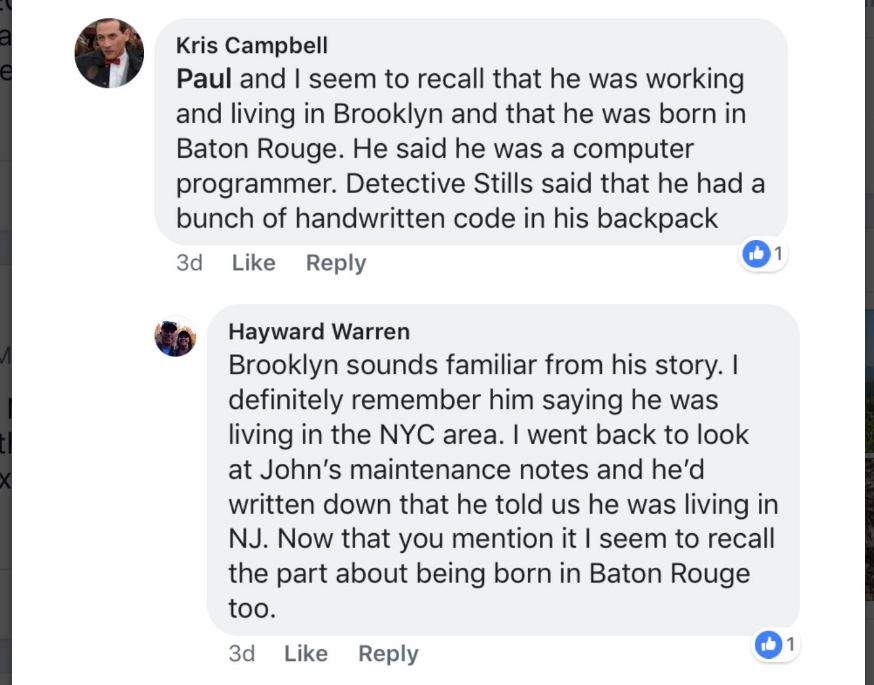 It appeared he’d been hiking for more than a year on various trails on the eastern United States coast.