Tuesday PM Forecast: timing out the next cold front

Seasonable temperatures will finish out the week. However, a cold front will deliver some showers on Thursday followed by another front with much cooler air ahead of the weekend. 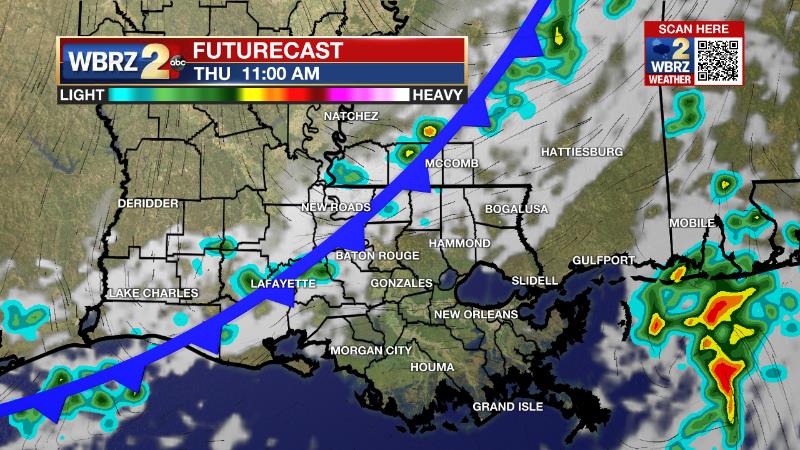 Up Next: On Thursday, a cold front will work into the Baton Rouge area. At this time, a band of showers is expected during the first half of the day, primarily during the mid-morning hours. A thunderstorm or two could be in the mix, but no major weather impacts are anticipated with rain amounts staying below a half of an inch. Cool air behind the front will be delayed until a secondary front passes through on Friday night. After this, northerly winds will cause dry conditions and below average temperatures into early next week. Generally, highs will be in the mid to upper 60s with lows in the low to mid 40s. Saturday will be the coolest day with highs struggling for the low 60s and overnight lows in the upper 30s. CLICK HERE for your full 7-Day Forecast.

The Tropics: In the Gulf of Mexico, Caribbean Sea and Atlantic Ocean, tropical development is not expected over the next five days. For the latest tropical forecasts, advisories and information, visit the WBRZ Hurricane Center as we finish out the 183 Days of Hurricane Season.

The Explanation: An upper level ridge over the region will begin to shift east and flatten out on Wednesday as an upper level trough digs across the central part of the country. Surface high pressure, which has controlled the weather since the weekend, will move farther east as well resulting in southeast winds. These features combined with an approaching cold front will result in added moisture in the atmosphere and a buildup of cloud cover. The cold front will work in from the northwest on Thursday morning with a band of showers and possibly thunderstorms. The ingredients for severe weather are quite low and with meager instability, not all will even hear rumbles of thunder. Until the front, temperatures will remain close to seasonal averages. As the cold front passes and the upper level trough settles over the Southeast, a reinforcing wave of energy will dig into the trough and send a secondary cold front through the area on Friday. Since the boundary will struggle for moisture in the wake of the first, it should pass with little precipitation. On Saturday morning, surface high pressure will take over the region once again. High temperatures will be reduced to the lower 60s on Saturday with nighttime lows dipping into the upper 30s. Dry conditions are expected to continue through the weekend into early next week with yet another weak front maintaining at or slightly below average temperatures.