Trending drier to end the week, but it will not last

Over the last week, most neighborhoods collected 5 – 7 inches of rain. Alas, the trend is a drier one for Thursday and Friday.

The Next 24 Hours: Overnight will be partly cloudy and muggy with light winds and low temperatures in the mid 70s. Aside from a stray afternoon shower, Thursday will work out to be dry for most. The consequence is hotter temperatures; highs will top out near 92 degrees with southwest winds of 5 – 10mph.

The Long Term Trend: We will copy Thursday’s forecast for Friday. Over the weekend, a weak cold front will come into the area. Don’t get too excited; we are not expecting any temperature changes. Rather, this boundary will provide a focus for scattered showers and storms—some could bring downpours, frequent lightning and gusty wind. One other bonus, the front will likely shield us from a tropical system approaching from the east. This general pattern will carry into next week with perhaps a slow decline in rain coverage.

?? @NHC_Atlantic has determined that Potential Tropical Cyclone 9 has become ?? Tropical Storm Isaias in the Caribbean Sea. Tropical Storm Warnings are in effect for the Puerto Rico, the U.S. Virgin Islands and parts of the Bahamas. https://t.co/3VwhgPQVL6

The Tropics: Potential Tropical Cyclone Nine continues to move west-northwest at 20mph in the northwestern Caribbean Sea. Despite packing maximum winds of 45mph, the storm has yet to be named because a closed central low has not developed. Nine is still expected to become Tropical Storm Isaias before reaching Hispaniola and Cuba on Thursday. The National Hurricane Center projects a tropical storm to be near Florida by the weekend. Whether the system ends up on the east or west side of Florida is still unclear. Once computer models have a closed low to work with, some tightening of the forecast cone can be expected.

The Explanation: Instability will decrease on Thursday and Friday as a weak upper level ridge builds over the region. The warmer, drier atmosphere will result in far fewer showers and storms though some isolated convection could develop near marine breezes during the peak heat of the day. On these drier days, high temperatures will return to normal levels in the low 90s. 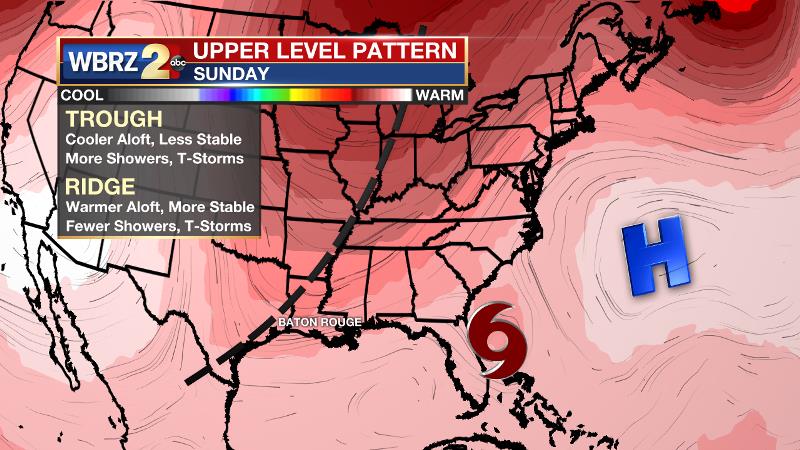 Over the weekend, a positively tilted longwave trough will slowly move into the Eastern U.S. and drive a weak cold front into the Southeast. This front will not have much cooling power but in combination with the associated trough, there will be another focal point for scattered to widespread showers and thunderstorms—especially Saturday through Monday. Compared to the soaking conditions of the last week, the atmosphere will be a bit drier this weekend, which will allow some storms to produce frequent lightning and gusty wind. This is because as dry air is pulled into a storm cloud, rapid cooling occurs. Cooler air is denser and therefore quickly falls to the surface in what is known as a downdraft. And even though drier, this is still a summer air mass so downpours remain possible as well.  In addition to providing the next round of active weather, the front and trough will likely combine with an upper level ridge over Bermuda to funnel Tropical Storm Isaias northward around Florida and away from the central Gulf Coast. That trough may be slow to break east until the middle of next week. Until that occurs, expect isolated to scattered afternoon showers and thunderstorms to continue.