After Friday, the Capital Area may not reach 60 degrees again until after Christmas. There are a few chances for rain this weekend into early next week.

Next 24 Hours: Expect clear skies, light winds and cold temperatures overnight. Lows will dip into the mid 30s with patchy frost possible north and east of Baton Rouge. It will be a sunny finish to the workweek though some high clouds may make an appearance just before sunset. High will top out in the low 60s for a second straight day.

Up Next: On Saturday, a very weak upper level disturbance will push through the region. Though the atmosphere is going to be rather dry, there could be just enough moisture to squeeze out a couple of light showers on an otherwise cloudy day. The dreary skies will keep high temperatures in the mid 50s. The second half of the weekend will be clear and chilly with Sunday morning lows in the low 30s and afternoon highs in the upper 50s. An area of low pressure will move across the Gulf of Mexico Monday into Tuesday delivering a period of rain to the central Gulf Coast. Temperatures are expected to stay at or below average through the 7-Day Forecast. In fact, long term guidance suggests that temperatures will be rather cold on Christmas Eve and Christmas Day. CLICK HERE for your detailed 7-Day Forecast.

We have increasing confidence that the coldest air so far this season will arrive just ahead of #Christmas. ?? ?? #LaWX #MsWX

(note that this image is a computer model forecast and the exact numbers will change a bit over the next 10 days) pic.twitter.com/snAMONb7W2

The Explanation: In the wake of a cold front, mostly clear skies and cool temperatures will persist through Friday. A weak trough cycling through the base of the larger upper level trough of low pressure will swing through the region on Saturday. Though largely moisture starved, this system will squeeze out what is available to produce a passing pocket of clouds and even a few light showers. In the wake of that disturbance, a refreshed northwest breeze will send in even colder air. As long as skies clear as expected, thermometers could take a run at freezing on Sunday morning. 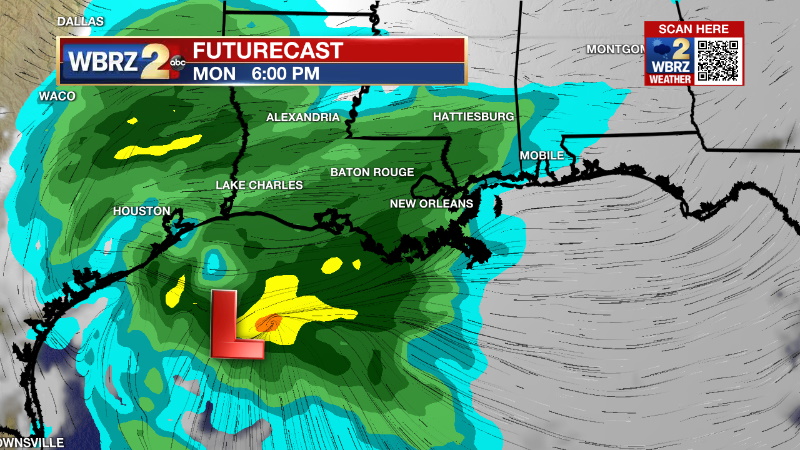 Another upper level disturbance will spin through the base of the main trough causing a surface low pressure system to form along the coast of Texas late Monday. This low will track from west to east across the Gulf of Mexico leading to a shield of stratiform rain moving across the central Gulf Coast States with it. This will be a cool rain, that keep the area well north of the unstable, stormy warm sector and so this appears to be just a nuisance event lasting through Tuesday morning. Behind this we will see another light reinforcing shot of slightly cooler air but then we wait for the arrival of an Arctic air mass behind the next front. That blast of cold air next Friday could lead to highs in the 40s and lows in the 20s for Christmas Eve and Christmas Day. This is too far out to call a lock, but confidence is increasing.