This is how you remind me

Temperatures are appropriately warm for early May. Rain showers will stay limited for those May flowers, that is, until a time they are not as welcome.

Today and Tonight: Thermometers will tick up yet another degree or so on Wednesday afternoon. Thanks to dew points in the upper 60s, we will throw some humidity thrown into the mix as well. Like Tuesday, little more than a brief, isolated shower is possible. Winds will remain southeasterly at 10mph. Overnight, skies will be mostly clear with lows in the upper 60s.

A familiar feeling has returned this morning. Chief Meteorologist @DrJoshWX explains why we use the dew point to describe it. #LaWX #MdsWX pic.twitter.com/co2MmxWMr0

Up Next: Continued southerly winds will result in stickies through the end of the week. Skies will be partly cloudy with low to no rain chances. Highs will be in the mid to upper 80s with lows in the upper 60s. Into the weekend, a cold front will approach the Gulf of Mexico. Due to this system, rain chances are expected to be elevated on Saturday. Thunderstorms are also likely, but severe weather is not a big threat as it looks right now. If this front can progress south or dissipate, weather for the second half of the weekend could shape up to be nice. 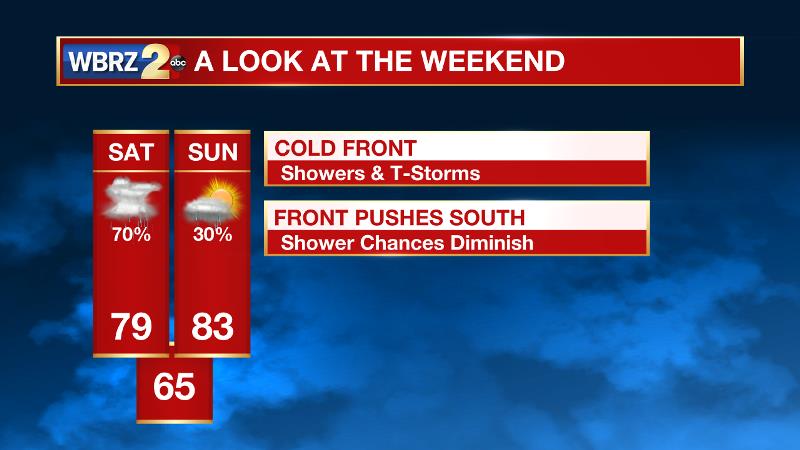 An upper level ridge over the southeastern U.S. coupled with limited mid-level moisture will result in minimal, rain chances and warm temperatures through the rest of the week. Onshore flow due to a surface high pressure to the east will allow dew points and humidity to rise as well. The ridge will begin to break down on Friday as a shortwave trough approaches from the northwest. Due to this, the atmosphere will be a bit more unstable and a few showers and thunderstorms could develop as a result. The trough will be opening and becoming positively tilted as it approaches so the attendant cold front may be slow to cross the area. With several days of moisture building into the atmosphere, the resulting uplift from the boundary will be substantive to force showers and thunderstorms to develop. However, due to the orientation of the trough and front, dynamic support will be lacking and severe weather is not anticipated. Rainfall amounts look manageable as well with generally an inch across the area. Actually, the EMCWF has backed off precipitation quite a bit over the last few runs suggesting more of a scattered showers type of scenario than a period of rain—which would actually be better news for outdoor plans. For now, we will stick with the GFS, which has stayed consistent with this forecast. Both models suggest the trough pushes east on Sunday, taking the front and showers with it.