Showers and thunderstorms will be isolated on Monday and then scarce for the remainder of the week. West of powerful Hurricane Dorian, the local area will be rather hot for the first full week of September.

Today and Tonight: The last moisture from a westbound tropical wave in the Gulf of Mexico will dissipate later today, but not before bringing isolated, afternoon showers and thunderstorms to the area. Prior to development, sunshine will help high temperatures reach the low 90s, followed by a mostly clear night with lows in the mid 70s.

Up Next: Beyond Labor Day, dry and sunny conditions are expected. This weather will be associated with a large upper level ridge of high pressure that will move over the area from the Four Corners region. This ridge's timing is protecting the Gulf Coast from Hurricane Dorian, and is helping to steer Dorian up the east coast. The ridge will set up camp, and stay through the remainder of the week into Saturday. Winds will be staying out of the north, which also means dry air. This dry air will help to keep dewpoints in the upper 60s to low 70s, but will also allow high temperatures to soar into the mid-to-upper 90s through Friday. 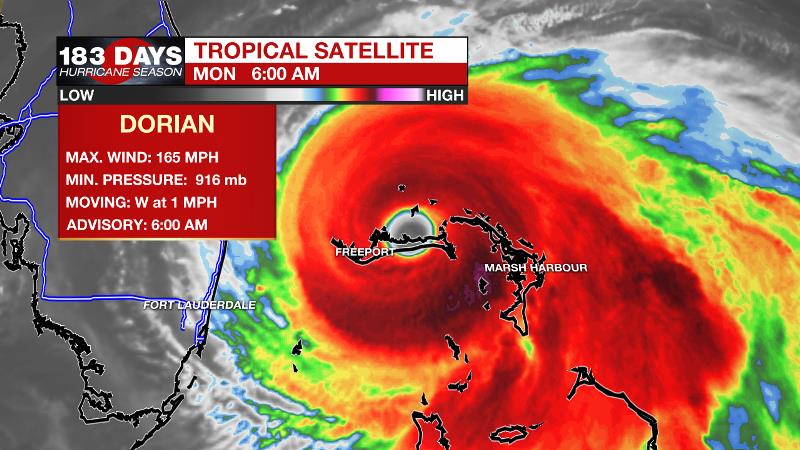 The Tropics: As of 5am Monday, Dorian was located near Freeport in the Bahamas with maximum sustained winds of 165 mph and crawling west at 1mph. A gradual turn to the northwest and north is anticipated to begin on Monday night or Tuesday. With little motion until then, Grand Bahama Island will be pummeled for another 24 hours.  Hurricane conditions are expected on the northeastern Florida Coast by mid-week and coastal sections of Georgia and the Carolinas should be preparing for this possibility as well. With an expected track so close to the U.S. mainland, a small westward deviation in actual path from forecast path could mean a tremendous difference in impacts felt inland, stressing the need to preparations to be completed. 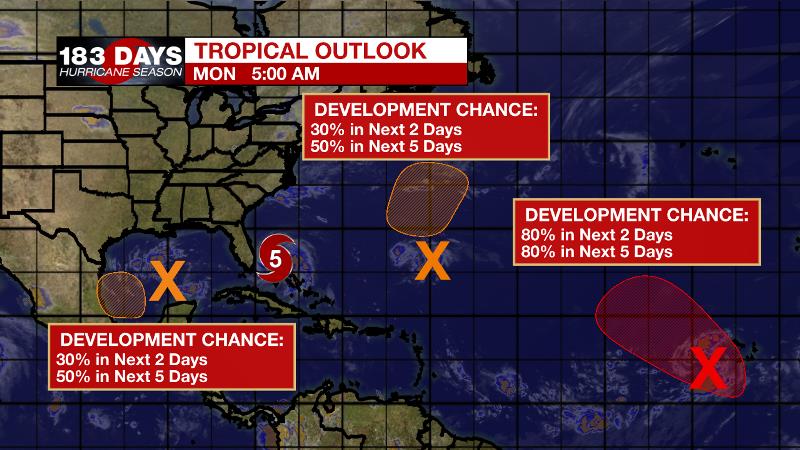 As we near the climatological peak of hurricane season, the Atlantic Basin is characteristically busy with several other areas being monitored for development. A wave in the southern Gulf has a medium chance of development before moving into Mexico.  A second wave in the central Atlantic, south of Bermuda also has a medium chance of development as it drifts northward. Finally, a third wave near the Cabo Verde Islands is the most likely to become Fernand by the middle of the week on a track northwestward into the central Atlantic. wbrz.com/weather, WBRZ Weather on Facebook and Twitter.

A tropical wave moving across the central Gulf triggered plenty of showers and thunderstorms on Sunday as it moved the old front back to northern Louisiana. That same front will get reactivated and move south again tonight which will restore dry air therefore lowering rain chances for the next several days. This process is caused by a strong ridge developing between Hurricane Dorian and Gulf low. Hurricane Dorian is positioned on the eastern side of a strong upper level ridge of high pressure over the Mountain West and west of a Bermuda high. The relatively lower pressure found between these two systems will allow short wave trough of low pressure to dip out of Canada and scoop Dorian northward. The upper level ridge over the Mountain West will build over the region Tuesday through Saturday and with dry air at the surface moving in from the north, high temperatures will be quite hot during that time period. Upper 90s are likely each afternoon with minimal chances for rain.