Scattered showers and storms in the area on Saturday

Typical of May, we have already gotten the warmth and humidity. By this weekend, we will get some of those showers and thunderstorms as well, and some of them could be strong.

Today and Tonight: Slow changes will begin to unfold on Friday. Expect high temperatures to stop just a degree or so shy of 90 due to a few more clouds and perhaps one or two showers around the area. Conditions look cooperative for LSU Baseball to complete their game with Ole Miss this evening. Light, south winds will continue to bring humidity into the area and a mostly cloudy night in the low 70s could give way to showers by daybreak.

Up Next: A stronger upper level disturbance and weak cold front will increase coverage of showers and thunderstorms on Saturday. Action should start in the morning and be scattered about through afternoon. That means we are not expecting a full day washout, rather times of rain and storms. 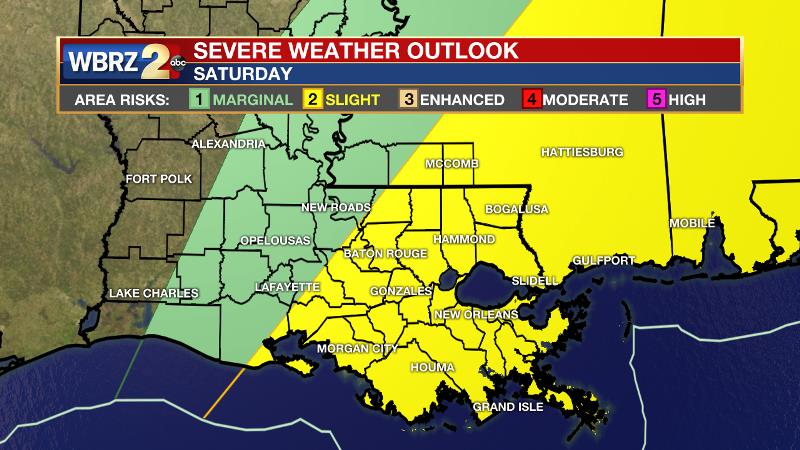 Some locations could catch a strong thunderstorm with frequent lightning, gusty wind and downpours of rain exceeding an inch. Precipitation will subside around dusk. By Sunday, activity should be confined to coastal areas. Some thermometers could take a run at 90 degrees again on Sunday or Monday.  As for LSU Baseball, there should be too many weather worries hosting Ole Miss this weekend. Some rain could potentially linger for the Saturday evening contest, but will wrap up deeper into the evening. Just take some sunscreen to the park on Sunday. 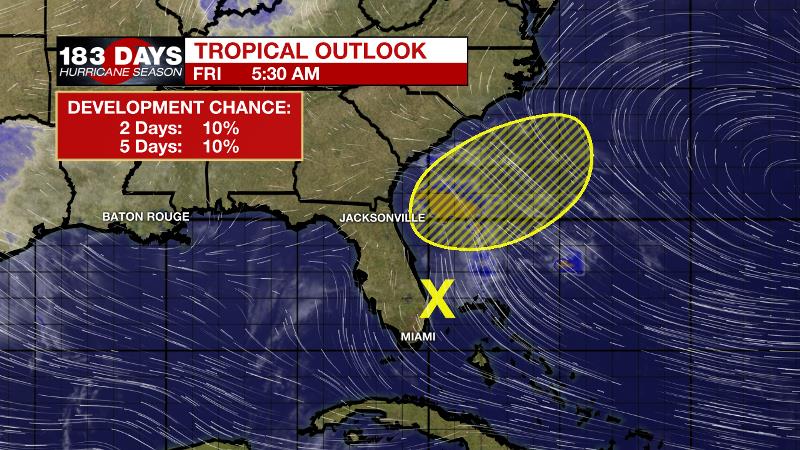 The Tropics: Even though the “official” hurricane season does not begin until June 1, as we have seen in over the last several years, a weak disturbance is having a go at organizing near the east coast of Florida. Some slow development is possible as the disturbance turns northeastward and moves over the western Atlantic eventually merging with a front. It will not affect the local area.

The Mississippi River: At Baton Rouge, major flood stage continues with a level of 41.5’ as of Friday morning. Peaking at 44.1’ on March 19, the river set its 7th highest recorded crest at Baton Rouge. In addition, at 118 days this marks the second longest period above flood stage. Heavy rain north of the area will cause the river to remain steady or slowly rise through Mid-May. It does not appear that this second crest will be as high as it was in March. The high water is primarily an issue for river traffic and river islands, although some inundation will continue unprotected low-lying areas. The city of Baton Rouge and the main LSU campus are protected by levees up to 47 feet. Some soggy areas and seepage may be noted due to the long duration of high water placing pressure on the levees. As some of the Mississippi River diverts into the Atchafalaya River, gauges at Krotz Springs and Morgan City will stay high as well. This creates backwater flooding in parts of Assumption Parish in areas such as Stephensville and around Lake Palourde. Like Big Muddy, this is expected to be a prolonged event but is not uncommon for the time of year.

An upper level ridge that resulted in mainly dry conditions and above average temperatures all week will be overcome by a shortwave trough crossing the central Gulf Coast on Saturday. This disturbance, which shows up very clearly on vorticity (upper disturbances) models, will increase development of showers and thunderstorms. The most active period will be Saturday morning into the afternoon hours. The Storm Prediction Center has placed the southeastern two thirds of the forecast area in a 2 out of 5 “slight risk” for severe weather. Parameters show a good deal of instability and moisture along with some lift due to a front and an upper level trough. What may be lacking is helicity or spin and the low level jet stream is weak relative to the last several severe weather threats. The most favorable combination of ingredients would likely meld north and east of Baton Rouge. Overall, the expectation is for unorganized storm cluster to form and be capable of producing gusty wind, downpours and frequent lightning. A tornado cannot be ruled out, especially in those areas north and east of Baton Rouge. The cold front will not make a clean passage and therefore no significant change in temperatures is expected but humidity could be briefly lower on Sunday. The front will stall in the northern Gulf and some coastal or nearshore showers could linger on Sunday and Monday. Further inland, those two days should work out to be drier. Additionally, high temperatures may challenge the 90s before the next disturbance comes into the area again elevating rain chances. This currently appears to be in the Tuesday timeframe.