A girl was killed in the 6.3 magnitude earthquake according to the Associated Press.

As this is still an active situation that authorities are still responding to, the girl's age and the exact location of her death remain unknown.

First responders and workers with agencies such as the Europe Office of the International Federation of Red Cross and Red Crescent Societies rushed to the area, to assist in rescue efforts and disaster relief.

Their videos of the impacted region, which have been uploaded to social media, reveal significant damage to many of the country's buildings and residences.

Our colleagues from Croatian Red Cross are on the ground assisting at the epicentre of the #earthquake at #Petrinja #croatia @crvenikriz_hr pic.twitter.com/tEJ58O8eab

Thinking of the people of #Petrinja #Croatia after today's magnitude 6.38 earthquake. This just in from local Red Cross @crvenikriz_hr on the scene providing help. pic.twitter.com/dtztOQ7nKg 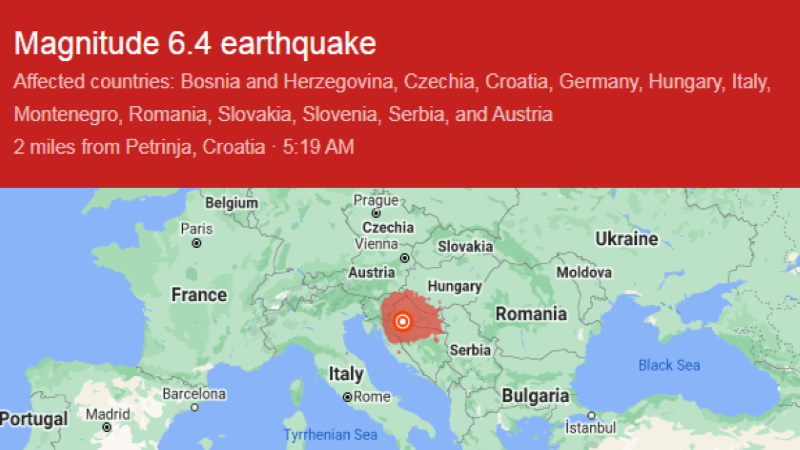 According to Al Jazeera News, the quake was felt throughout the country on Tuesday, as well as in nearby Serbia, Bosnia and Herzegovina and as far away as Graz, which is in southern Austria.

Petrinja, which is is about 60 37 miles from the country's capital of Zagreb, was especially damaged.

Petrinja's mayor, Darinko Dumbovic, said in a statement broadcast by HRT TV: “My town has been completely destroyed, we have dead children."

“This is like Hiroshima – half of the city no longer exists."

The Associated Press notes that the same area was hit by a 5.2 quake on Monday as well as several smaller aftershocks on Tuesday.