Olympic Games kick off with Opening Ceremony in Tokyo

TOKYO, Japan - After a year of COVID-related delays and uncertainty, on Friday morning the Japanese flag was raised in Tokyo's Olympic Stadium and the Opening Ceremony for the 2020 Olympic Games finally began.

The $1.5 billion stadium, which was built specifically for the 2020 Olympics, was nearly empty due to COVID-related concerns.

According to CNN, a total of about 950 VIPs will take part in the Opening Ceremony, these include around 800 foreign guests and 150 locals from Japan.

The introduction to the much-anticipated competition will feature about 200 athletes from the United States, and the flag bearers representing the U.S. are Sue Bird and Eddy Alvarez. A total of 613 team USA members will be present.

Fireworks light up the sky during the opening ceremony of the Tokyo 2020 Olympic Games. https://t.co/PX5uwHuoav pic.twitter.com/VIzfT1ufLD

The Opening Ceremony included a somber moment of silence out of respect for those who'd suffered from the deadly impact of the novel coronavirus pandemic.

After the Japanese national anthem was sung, the moment of silence allowed participants and viewers to honor and remember the citizens that the global community lost to COVID-19.

Concerns related to the spread of novel coronavirus has prompted some to protest against the Olympic Games.

Even as the Opening Ceremony unfolded protesters outside of the Olympic Stadium held banners and signs with slogans that reflected their demand to stop the Games amid the pandemic. 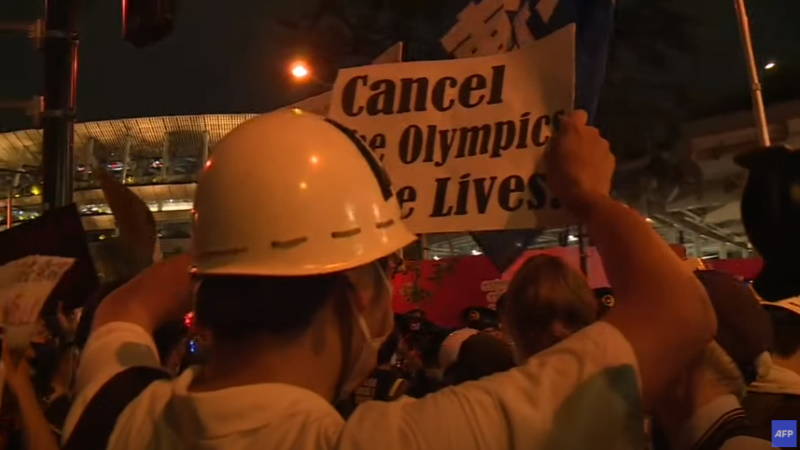 As the Olympics begin in Tokyo, positive COVID-19 cases are on the rise in Japan. A total of 5,366 new cases were reported as of Thursday.

This is why many events will take place without spectators in attendance.

Throughout the ceremony, viewers will see that while some athletes practice social distancing, others chose not to.

For example, while Ukraine and UAE's representing athletes walked at distance from each other, while Argentina came dancing and cheering together on the floor.

While COVID-19 has limited the number of spectators who can be present at the ceremony, US First Lady Jill Biden and French President Emmanuel Macron are reportedly attending the event.