A storm system will kick the week off on a rainy note. The back half of the workweek will be quieter and cool.

Next 24 Hours: Tonight will be cloudy, breezy and rainy with a few thunderstorms as well. One or two storms could be strong, especially south of I-10 so be sure to have a way to access warning while asleep. Rain may fall heavily at times with an inch or so in most locations. Since it has been very dry of late, this should not create major problems and would be considered welcome by most. Temperatures will fall through the 50s to lows in the upper 40s near dawn. 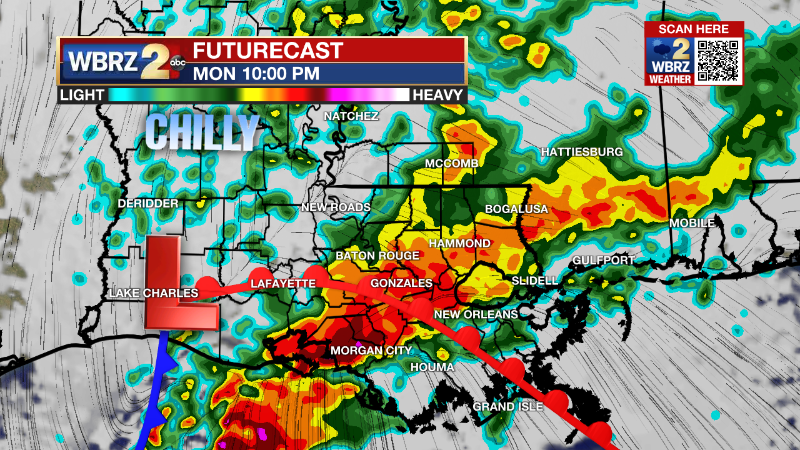 Tomorrow, rain will be ending from west to east with most the precipitation over by daybreak. Northwest winds of 10-15mph will bring in much drier air but also keep temperatures cooler than average. Even with some returning afternoon sunshine, highs will stay in the low 50s.

Up Next: We may not find a completely sunny day through the remainder of the workweek but this not to say we’ll be fully overcast either. Wednesday through Friday, expect partly sunny afternoons with highs in the mid 50s. Nights will be chilly with lows in the 30s. Friday could even approach freezing. A weak storm system will pass out area to the south on Saturday but could fling a stray shower as far north as I-10. Highs back into the 60s are not expected until at least early next week. CLICK HERE for your detailed 7-Day Forecast.

The Tropics: For the North Atlantic, Caribbean Sea and Gulf of Mexico, all is quiet. No tropical development is expected over the next five days.

The Explanation: A surface low pressure system, driven by a broad upper level trough, will move from southeast Texas through southeast Louisiana overnight. The surface low will ultimately follow the warm front so the inland advance of that boundary will be important to determining where the highest rain totals occur and if there could be any strong thunderstorms. Ultimately, the setup of the warm front and track of the low is expected to be between I-10 and the Louisiana coast. This is good news because it will greatly limit the potential for severe weather and flooding. Still, about an inch of rain, with locally higher amounts near the coast is expected by Tuesday morning. It will take several hours for clouds to clear and most of Tuesday could stay cloudy. On top of that, northwest winds will cause highs to struggle to get beyond the low 50s. Wednesday through Friday will be generally quiet with below average temperatures. A weak disturbance will likely be moisture starved and have trouble producing rain on Thursday. The next cold front passing through will be on Saturday but may come by mostly dry with the best chance for some showers closer to the coast again.