Look for one more day of widespread showers and thunderstorms.

Today and Tonight: Monday will bring mostly cloudy skies along with times of showers and thunderstorms—especially from late morning into late afternoon. Much of the action should stay north of the coastal parishes. Some of the storms could produce locally heavy rain. With saturated grounds after an active weekend, it would only take an additional 1-3 inches for some flash flooding to occur. Thunderstorms will be capable of producing 2-3 inch rainfall rates per hour today. The National Weather Service Weather Prediction Center is highlighting an area north of I-12 for some potential flooding problems. Please remember that if you do encounter a flooded road to turn around for an alternate route. Pushing through flood waters can cause your car to stall out, or worse, for you to be swept away. Of course, due to the rain and cloud cover, high temperatures are not expected to climb much and will top out in the upper 80s. Tonight, the activity will begin to diminish with low temperatures in the mid 70s.

Stay in touch with the forecast today with the *free* WBRZ WX App. which sends push notifications to Apple and Android devices if a watch or warning is issued for your location. You can also plug in to the WBRZ Weather Team on Twitter and Facebook. 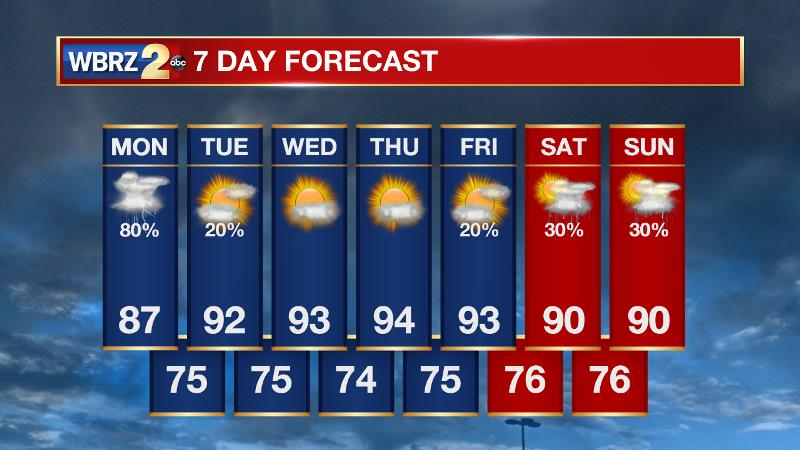 Up Next: The area will trend drier into midweek. While a stray thunderstorm isn't impossible Tuesday through Friday, less than 10% of the 13 Parish, 3 County forecast area will pick up measurable rain. Temperatures and the humidity will be seasonably high as a result. Nights will be muggy with lows in the mid 70s. Some patchy fog may be possible some mornings. By next weekend, we will be keeping an eye on a cold front that has some potential to clear the area with slightly lower temperatures and humidity—nothing major though. This front will once again increase the chances for showers and thunderstorms. 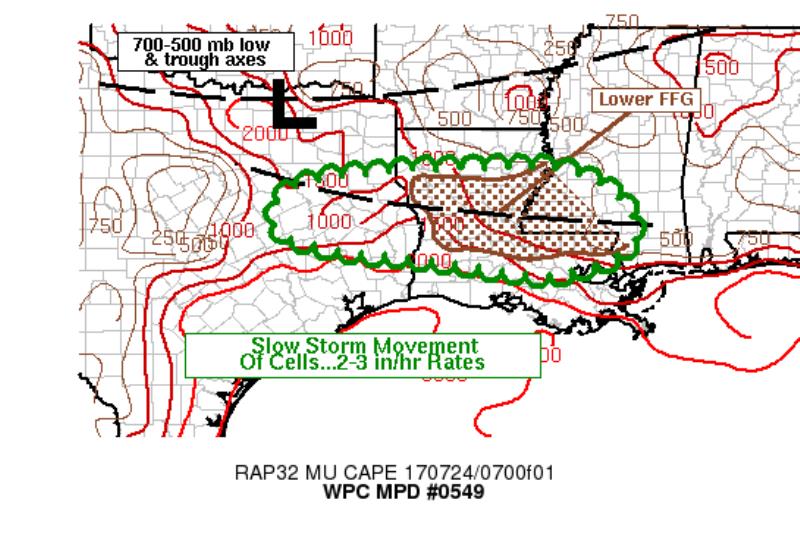 Indications are that an area of high pressure over the Gulf of Mexico is edging northward and settling into coastal areas this morning. Showers and thunderstorms will continue to move from west to east in the relatively deep flow between this high and a trough that is developing across northern Louisiana. Winds will remain slightly elevated due to these two competing systems and showers and thunderstorms will have a sharp cutoff between drier air along the Louisiana Coast to inland where it will be much wetter. Scattered flash flooding will be possible across the northern half of the forecast area die to slow storm cell motions. Some of these storms will have rainfall rates of 2-3 inches per hour. The threat for flash flooding will increase during the morning hours. If rain coverage increases over the region as forecast models suggest, flash flood values will be lowered to 1-3 inches in 3 hours. After today, the high will wobble northward into southwest Louisiana effectively ending rain chances for the week. In response to drier afternoons, high temperatures will climb back to and above average—in the low to mid 90s. As the weekend approaches, a cold front will approach the area, and is actually expected to move through Saturday evening or Sunday morning. The front will be accompanied by a good bit of shower and thunderstorm activity which could be strong or even severe, which is not surprising for a strong cold front this time of year in a hot and humid air mass. Deep dry air behind the front will be a welcome change, but any relief should not be expected to last long this time of year.