January was the fifth warmest for US 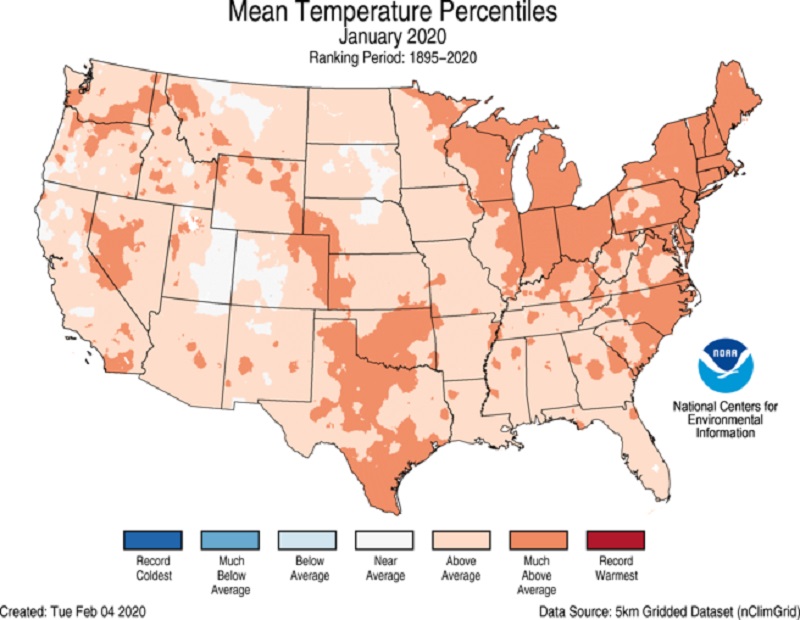 High temperatures were observed to be well above average for regions of the Great Lakes, Northeast, Mid-Atlantic, Southeast, the southern Plains, and across the West. Michigan ranked the fifth warmest, with Wisconsin and Rhode Island ranked the sixth warmest on record. No state in the contiguous U.S. experienced average or below average temperatures for the month of January. 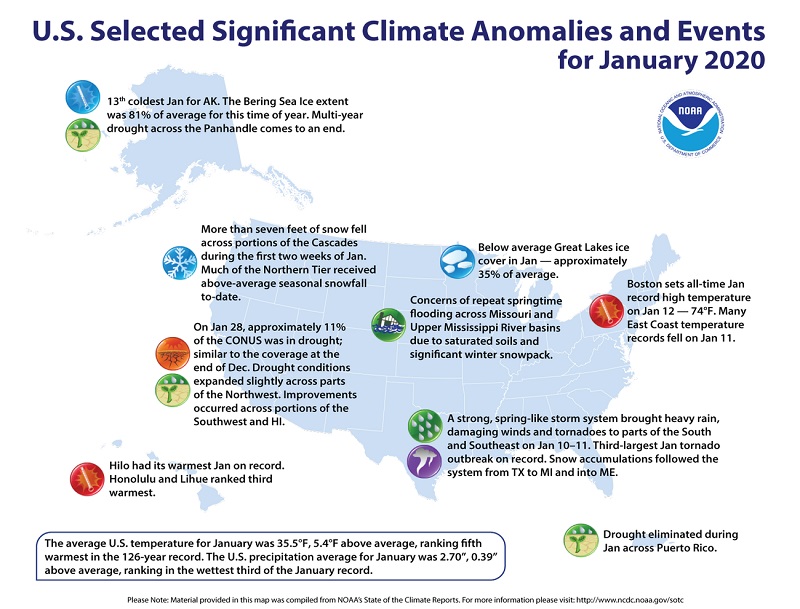 Temperatures were so warm around Michigan that the majority of the surface water temperatures of the Great Lakes stayed above freezing. Basin-wide ice cover spiked briefly toward the end of the month, but still only reached approximately 35% of average for this time of year. Usually Lake Erie is just over 50% ice coverage by this time, but was only 0.4% on January 31. As a result of low ice coverage on the Great Lakes, lake effect snow events have become possible later in the season which is also leading to higher seasonal snowfall totals in Michigan, northern Ohio, northwest Pennsylvania, and western New York. 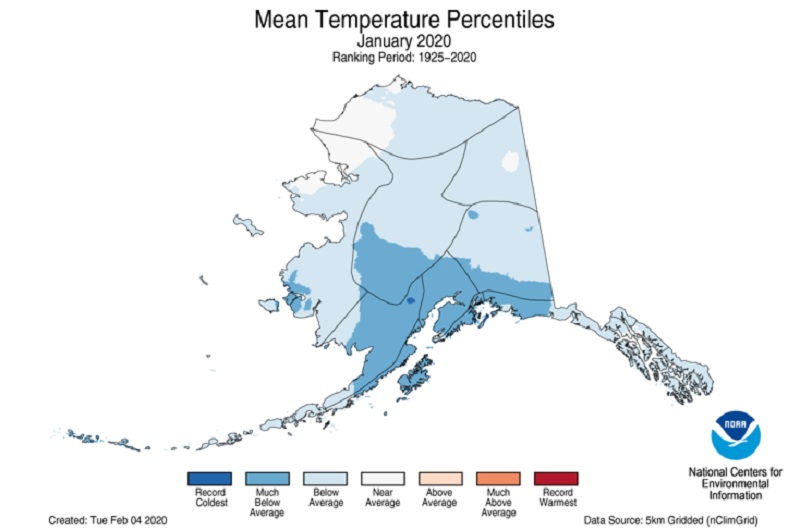 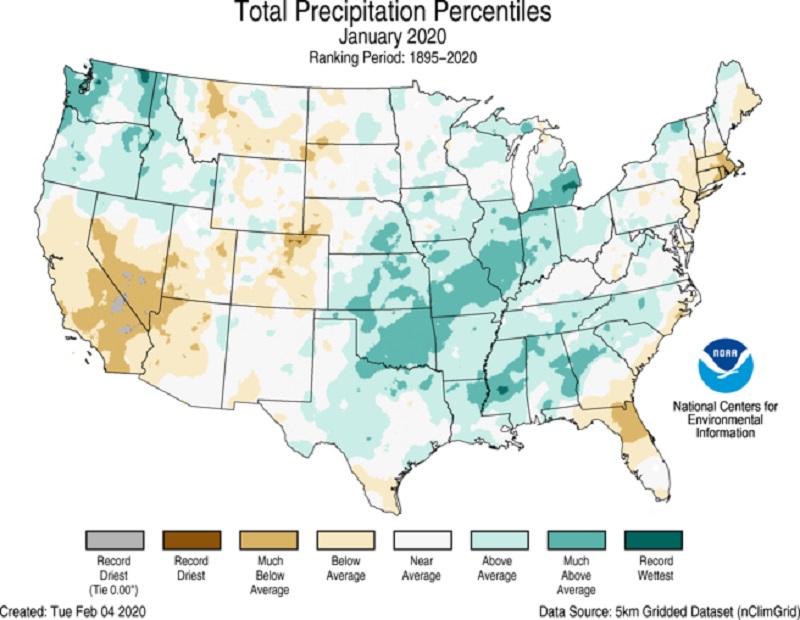 Average rainfall for the contiguous U.S. amounted to 2.70”, 0.39” above average to rank it the third wettest on record. The Pacific Northwest and the South did receive well above average rainfall and snowfall, as Washington ranked fourth wettest and Oklahoma sixth on record. This was not an overall wet period for the entire nation. Below average precipitation occurred for much of the Southwest, Florida, portions of the High Plains, and the Northeast. In fact, Rhode Island had its sixth driest and Massachusetts its 10th driest January on record.  Alaska also had its driest January since 2006, ranking it 14th on record.

Here's how temperatures and precipitation amounts stack up here in Baton Rouge through the month of January: 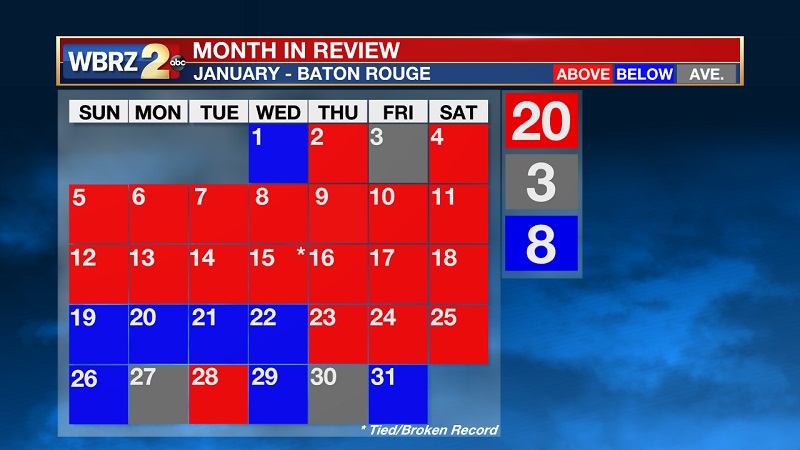 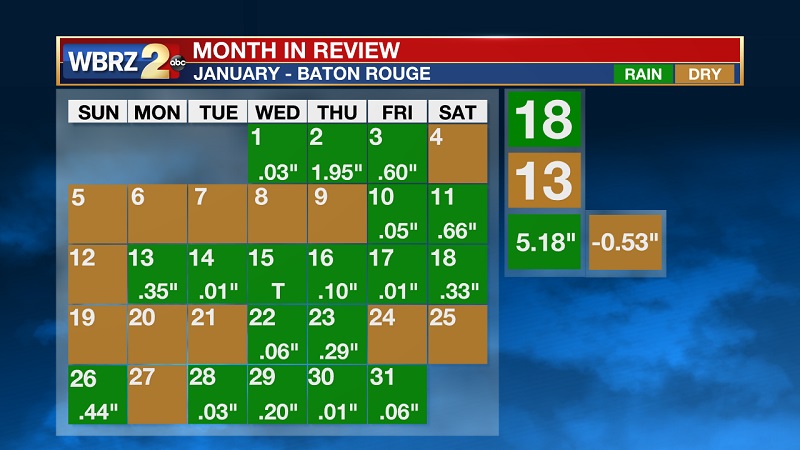