Around the United States, big heat will be the big story for the remainder of the week. Many large metropolitan areas from the Midwest to East Coast face high temperatures near 100 degrees with even higher “feels-like” temperatures. Locations from Oklahoma City to Omaha to Kansas City to St. Louis and even Philadelphia are under an Excessive Heat Warning.

Today and Tonight: Similar to Wednesday, this afternoon will have temperatures climbing into the low 90s by 1pm followed by a high temperature near 94. Some clouds will bubble up and a slightly more active sea breeze may help to activate some isolated showers and thunderstorms by mid-afternoon. Overnight, any activity will ease with a low temperature near 75. 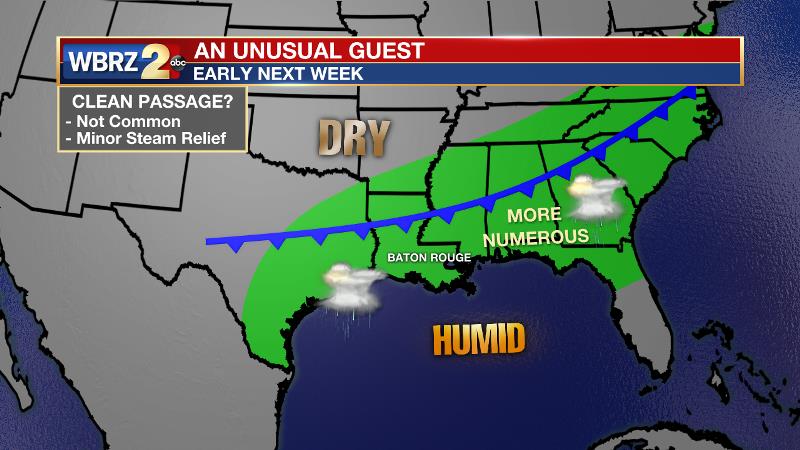 Up Next: By the weekend, a bit more instability in the atmosphere may allow for a slight uptick in shower and thunderstorm development, especially during the afternoons. Highs may stop just a degree or two shy of average as a result. Into early next week, it appears as though a weak front could backdoor into the region. As you might imagine, adding a trigger in the form of a front to July steam will allow for more numerous showers and thunderstorms to occur. It is still unclear if this front will be able to scrape through the region to provide a slight reduction in humidity.

A broad upper level ridge will stay over the region through Thursday. Both the American and European forecast models are picking up on an inverted trough traversing the Gulf of Mexico beneath this broad ridge over the weekend. Due to this, an increase of showers and thunderstorms can be expected, but should follow the normal timing pattern. An actual cold front may make a visit by early next week and so we will add greater rain coverage to the 7-Day Forecast on Tuesday. At the moment, severe weather chances look low regarding this front. However, it is a long way out so that could change as we move closer. Fronts getting this far south without being strongly modified are rare to say the least, so a big cool down is not anticipated. Dew points could drop enough to allow overnight low temperatures to nudge below average.