Friday PM Forecast: soggy start to the weekend, another storm early next week

The first half of the weekend will be soggy and chilly. Some dry time is then expected before a strong storm system moves through on Tuesday.

Tonight & Tomorrow: Cloud cover will continue to lower and thicken overnight. Showers will become more numerous near daybreak as low temperatures bottom out in the upper 40s. A broad swath of rain is expected to slowly pass over the central Gulf Coast from west to east throughout Saturday. As a result, the first half of the weekend will be rather soggy with about one to two inches of rain falling in most locations. Thanks to the damp conditions, it will stay chilly with highs in the low 50s.

Up Next: Showers will wrap up during the first half of Sunday with some sun possible before the weekend is over. Quiet and chilly conditions will prevail on Monday with mostly sunny skies bringing morning lows in the low 40s to afternoon highs in the low 60s. Focus will then shift to the next storm system on Tuesday. That one will be worth monitoring closely. The track of the associated surface low will determine how impactful that system will be to the local area and the difference between a severe weather event and mainly just rain. The trailing cold front will cause below average temperatures for the end of next week.

Detailed Forecast: Clouds will quickly increase on Friday as a surface low forms at the tail end of an old front near the coast of Texas. This low will help to lift moisture into the central Gulf Coast with a shield of rain overspreading the area to begin the weekend. Thanks to the dreary weather, there will be a small range in temperatures on Saturday with lows in the upper 40s and highs in the low 50s. While some rumbles of thunder could occur on Saturday, any organized thunderstorms will stay well offshore. After an inch or two in most neighborhoods, rain will end from west to east on Sunday morning. A decrease in cloud cover is expected late in the weekend as a brief upper level ridge passes over the region allowing a quiet beginning to the new week. Given the lower amplification of the ridge and mainly clear skies, temperatures will be a little closer to average Monday with morning lows in the low 40s and afternoon highs in the low 60s. 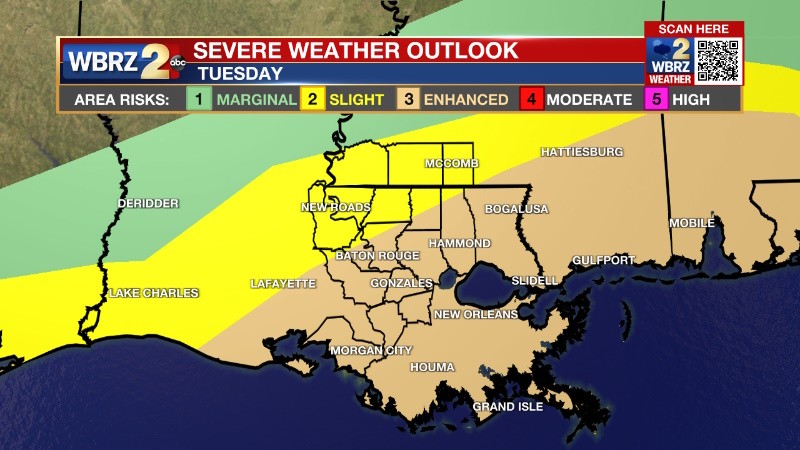 Moving into Tuesday, a vigorous upper level trough of low pressure will emerge out of the Southwest U.S. into the Southern Plains. This will cause a surface low to form in the climatologically favored area off the east coast of Texas. The exact placement of the surface low will determine the overall magnitude of and location of any severe weather potential. At this time, a track somewhere through Louisiana is likely, with a further inland path more conducive to severe weather locally. There is some indication that cool stable air at the surface will be too hard to overcome which could nix out widespread severe weather entirely. However, if warm and unstable air can penetrate far enough inland many of the other ingredients including shear, lift and moisture are more than sufficient to support severe weather including damaging winds and tornadoes.