Thursday PM Forecast: a shot at 70 before a shot of cold air

Expect a mild finish to the workweek. Another shot of cold air will arrive during the first half of the weekend.

Next 24 Hours: Friday will be nice and spring-like. Beneath sunny skies high temperatures will take a run at 70 degrees.

Up Next: Saturday will seasonably mild with a high temperature in the mid 60s occurring during the morning hours. A cold front will push through around the middle of the day. This will switch winds around to the north and create a situation of falling temperatures in the afternoon, ending up in the low to mid 50s by nightfall. Though the cold front will pass by dry, a few clouds should develop. Sunday will be chilly, starting near freezing and only recovering into the mid 50s despite plenty of sunshine. Another freeze is possible by Monday morning. The cold air mass will be short-lived with highs returning to the 60s on Monday and Tuesday and 70s on Wednesday. The next good shot at rain and thunderstorms is slated for next Thursday. CLICK HERE for your detailed 7-Day Forecast. 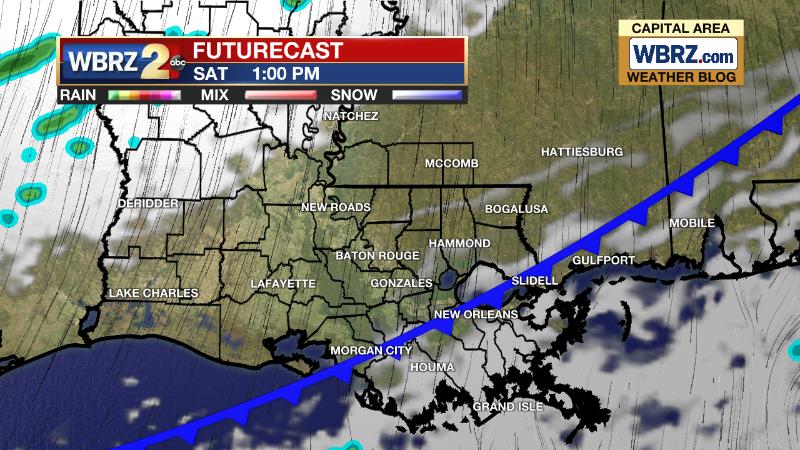 The Explanation: An upper level trough of low pressure over the Southwestern U.S. will move east and into the local area into the weekend. Ahead of this feature, winds will turn southwesterly art the surface causing above average temperatures to end the week. As strong upper level winds move through the trough, it will deepen and aid in the development of a surface low pressure system in the Western Gulf of Mexico on Friday. While that piece of energy will likely remain over open water, a very strong cold front will be driven through the area by the upper level trough. This system will move through late Saturday with almost all shower activity staying offshore. After the front passes, winds will shift back to the north, setting up a chilly second half of the weekend. Highs will be about 10 degrees below average on Sunday afternoon. Lows will be near freezing on Monday morning. The upper level trough will quickly depart next week while dry air stays in place and a surface high pressure system slides east toward the Carolinas. The result of these changes will be calm to southerly winds and clear skies producing quickly moderating temperatures back above average temperatures by Tuesday afternoon. By Wednesday, stronger and deeper onshore winds will develop with moisture returning to the area. As dew points rise, overnight lows will be in the 40s on Wednesday and possibly 60s by Thursday. This rapid rise in moisture with relatively cool lake and land water will cause some fog formation. While this occurs at the surface, a strong upper level trough of low pressure will be racing out of the Southwest U.S. The center of this trough will point from northwest to southeast developing a strong cold front over the Lower Midwest. That system will sweep east into the local area on Thursday. It is that time of year where we need to consider each of these systems for the potential of severe weather and heavy rain. It is too early to dig into those specifics but details will start to become clearer over the weekend.