Florence targets East Coast, other storms flirt with the Gulf

Hurricane Florence has placed a target on the East Coast for dangerous wind and storm surge and catastrophic inland flooding. Two other storms are churning in the Atlantic Ocean, with another trying to develop, but none pose a serious or immediate threat to the local area. Still, a tropical air mass means plenty of rain is to come through Wednesday. 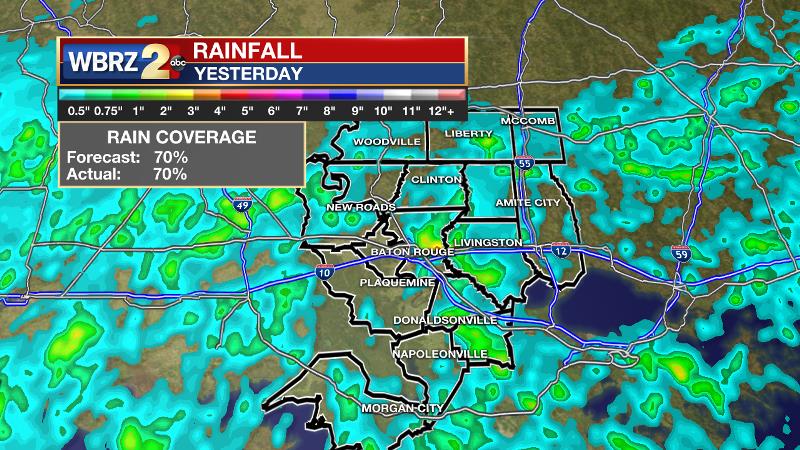 On Monday, about 70 percent of the area received rain with the highest totals occurring in eastern East Baton Rouge and western Livingston Parishes. Some neighborhoods may have picked up 3 to 4 inches of rain. Sun stayed out a bit longer than expected allowing high temperatures to reach the low 90s.

Today and Tonight: Another active day is ahead as a stalled front produces widespread rain and thunderstorms. The most likely time for rain will be mid-late afternoon. Frequent lightning, gusty wind and downpours will be possible. Another quick inch or two could fall in isolated spots. The additional clouds, showers and thunderstorms will limit daytime high temperatures to the middle 80s. Nighttime will be mostly cloudy with a spotty shower and lows in the low 70s.

Up Next: The stalled front will begin to dissipate on Wednesday, but still have enough presence and moisture to create scattered showers and thunderstorms—especially during the afternoon. About 50 to 70 percent rain coverage is expected. The active cycle will ease by Thursday and Friday, when an upper level ridge brings a bit more stability to the atmosphere. As a result, afternoon thermometers will stride for 90 degrees again. 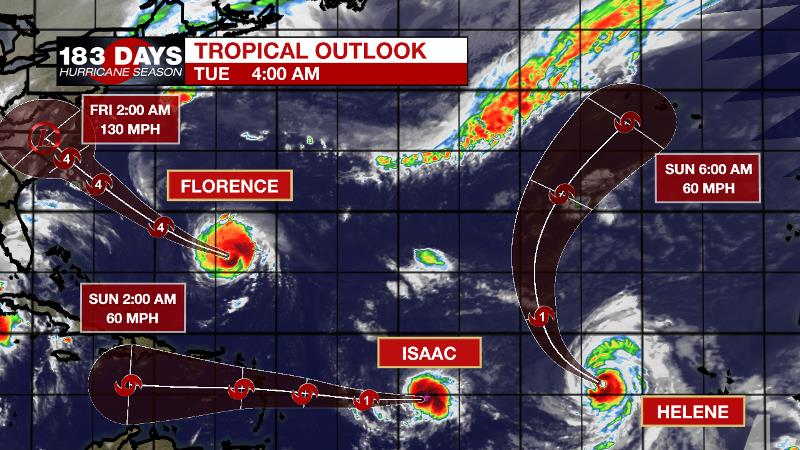 The Tropics: The Atlantic Basin is very busy for the climatological peak of hurricane season (Sept. 10). There are three named storms and one area of possible development in the western Caribbean Sea. First, Hurricane Florence poses a serious threat to the East Coast of the United States. Major Hurricane Florence is expected to make landfall in the Carolinas as a category four or five later this week. Beyond the initial wind and surge threats, a slow-down in speed may lead a long duration of very heavy rain for a region that has already seen plenty over the last few weeks. Inland flooding is a major concern. Tropical Storm Isaac will cross over the Windward and Leeward Islands later this week, encountering a harsher environment in the Caribbean Sea by the weekend. For what it is worth, American and European model guidance has this system diminishing near Central America by early next week, but this storm should still be watched. Hurricane Helene is strengthening near the Cabo Verde Islands, but will soon turn due north and out to sea. 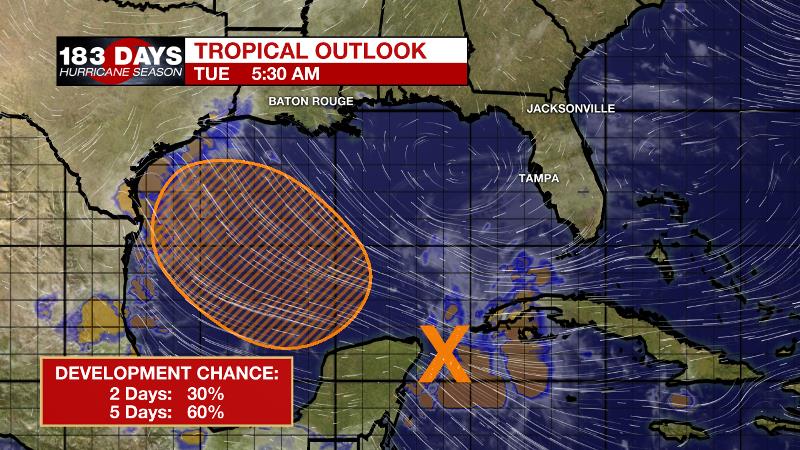 Lastly, an area of showers and thunderstorms in the western Caribbean Sea is expected to cross the Yucatan Peninsula into the southern Gulf of Mexico where it is given a 60 percent chance of development. As of now, this system does not look to directly impact the central Gulf Coast, but depending on its evolution could eventually lead to increased showers and thunderstorms along the Texas Coast and in the northwestern Gulf of Mexico. Stay in touch!

A trough will remain stalled out over east Texas through Tuesday while a front will be stalled just northwest of Baton Rouge. These features will keep the forecast area in deep, moist southwest flow with plenty of lift available. Precipitable water values expected to be near or above 2 inches through Tuesday so locally heavy rain is possible with the potential for isolated rainfall of 2 to 4 inches over a 2 to 3 hour period. More action will mean high temperatures stay in the mid 80s. By Wednesday, most of the area will return to a more typical late summer regime. 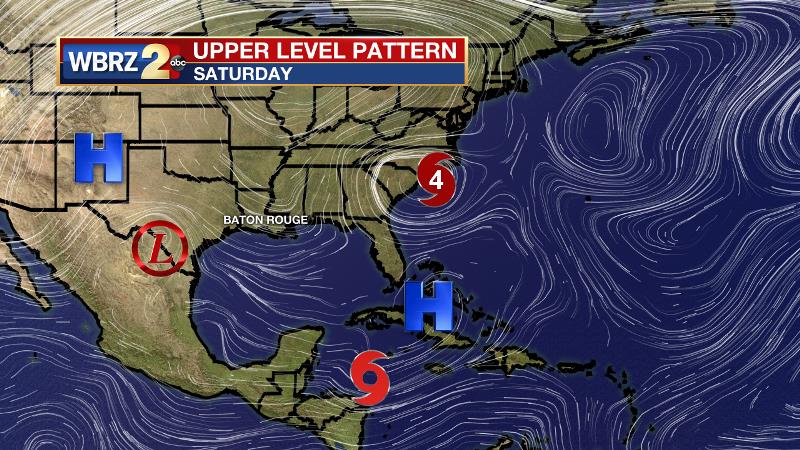 Thursday into Friday, a ridge is expected to develop over the interior southeast U.S. as major Hurricane Florence moves into the Atlantic Coast. At the same time, we will be watching the south central to western Gulf of Mexico as a tropical wave could try to develop into a tropical cyclone as it moves northwest towards the Texas Coast Friday or early Saturday. The ridge will help to squeeze Isaac and any Gulf disturbance south and west of the local area. Right now, any impacts to the forecast area appear to be mainly over the southwest Louisiana Coast with increased showers and thunderstorms. In addition, the ridge will start to suppress convection later this week and into the weekend allowing more areas to top out in the low 90s.