Daily coverage in showers and thunderstorms is expected to increase through the week. Keep in mind that warm season storms are capable of a quick inch or two of rain and localized, nuisance flooding as well as frequent lightning. When thunder roars, go indoors. We continue to monitor the possibility of a wet Memorial Day Weekend due to added moisture from the tropics.

The Tropics: A broad area of low pressure is producing clouds and showers over the northwestern Caribbean Sea. This surface low and upper level low will remain in poor environmental conditions for tropical development through the middle of the week. As the system moves into the southern Gulf of Mexico, some gradual development is possible by the end of the week. Regardless of development, locally heavy rain will be possible from the Central to Eastern Gulf Coast by next weekend. 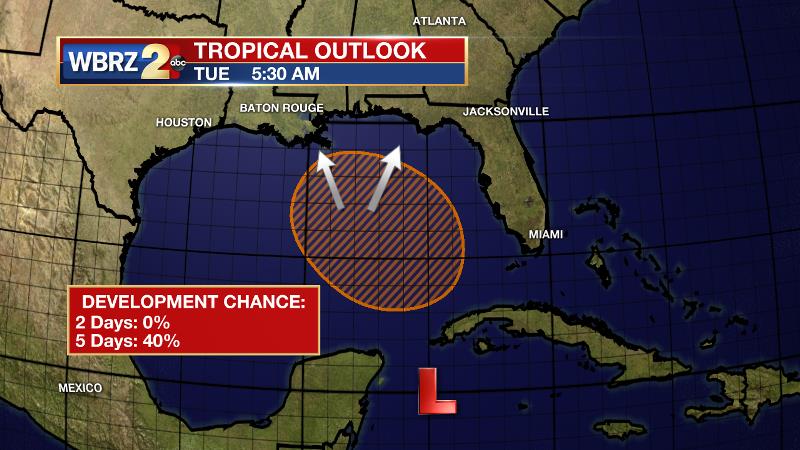 Today and Tonight: Another day of warmth and humidity is on tap with a slightly better chance of showers and thunderstorms. Highs will top out near 90 degrees and rain coverage around 30 percent. As showers and clouds break apart overnight, lows will dip into the low 70s.

Up Next: Moving through the end of the week two key forecast models are in disagreement in terms of track and intensity of a tropical disturbance in the southern Gulf of Mexico. One keeps the system along the coast of Florida and the other brings it near the Louisiana coast through the weekend and into next week. In either scenario, increased showers and thunderstorms appear likely Thursday through the weekend. Rainfall totals of 3-6 inches are possible over the next week with locally higher amounts. This could lead to some flooding issues. Stay tuned as a wetter forecast could necessitate adjustments to Memorial Day Weekend plans.

A weak area of low pressure will break by midweek, but at the same time, a disturbance will likely develop near the Yucatan Peninsula. This will stream moisture northward as a trough over the northeastern Gulf of Mexico gradually deepens. Forecast focus will turn to the disturbance moving out of the northwest Caribbean Sea and into the southern Gulf of Mexico. Models remain in disagreement as to the evolution of this system beyond that point. The GFS model captured this idea first and continued to push a weak surface low east toward Florida over the weekend. The ECMWF model was late to the party but has trended further west and toward Louisiana with a surface low. If this scenario is correct, heavy rain could be a threat for the Memorial Day Weekend. Even if tropical development does not occur, this system will likely bring much higher rain chances than what occurred during the first half of the month. Weather Prediction Center 1-7 Day forecast totals of 3-6 inches would be manageable but isolated higher amounts could become problematic. Through the week, we should better be able to target where these heaviest totals could occur. As afternoon convection gets more active, high temperatures are often held in check, topping out in the upper 80s and low 90s instead of the mid 90s.