CENTRAL - As the Comite River reached its forecast crest late Friday, it caused emergency crews to close Greenwell Springs Road because of flooding near the river.

The Comite River at Joor Road was expected to crest at 25.5' ft but appears to have peaked a little higher, at 26 ft. 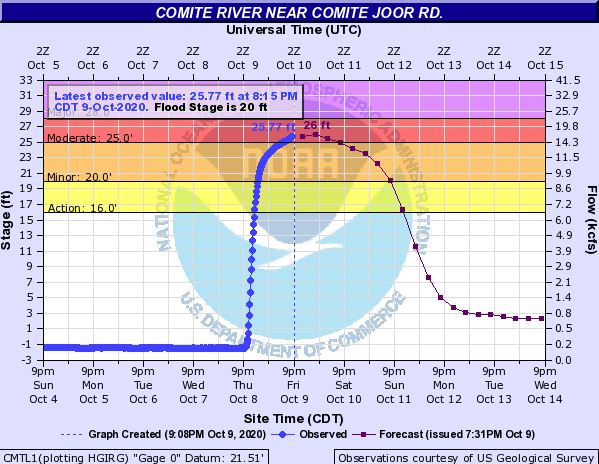 Forecasts show that high water in the Comite River is expected to go down through the weekend.

The river had already risen to 22.54' ft. at 7:30 a.m. Friday morning, which led the Mayor of Central to break down exactly what that meant for residents on social media.

David Barrow took to Facebook, warning locals of potential drainage issues and urging them to what they can to prevent flooding.

"If you live near the Comite," Barrow explained, "and have had flooding before... you're going to probably have some issues. This will be the first highest level since the flood of 2016. But right now it's projected to be about eight to nine inches lower than the flood of 2016."

"The Comite River had one of it's quickest rises in a long, long time it went up nearly 19 feet in a few hours," Barrow said. "North of us, in East Feliciana parish, some areas there had more than ten inches of rain. All of that rain is coming down the Comite River. The Comite River as of right now is expected to crest a little over 25 feet sometime midday today, in comparison in 2016 it crested a little over 34 feet. That's a nine-foot difference."

He reiterated that this crest is based on current meteorological advisories and is subject to change, saying, "That can all change, but what we want you to understand is some of our local drainage channels in your neighborhood, anything that drains into the Comite River... is going to be slow to drain."

He then detailed exactly why residents of Central should expect drainage problems.

He urged locals to stay calm and encouraged them to stay avoid driving on roadways when weather conditions begin to further deteriorate around 3 p.m.

Mayor Barrow also encouraged residents to check their driveway's culverts to ensure they're clear and not clogged with leaves and sticks or other objects that may have floated into them.

"One favor that you can do for us right now, go to your driveways or backyards or anywhere that you have a culvert that goes under your driveway," Barrow said. "While it's not raining right now, check it for clogs."

He warned that clogged culverts can cause an entire street to flood.

The Comite River, a right bank tributary of the Amite River, with a convergence near Denham Springs, is 56.1 miles long with a drainage basin that's approximately 348 square miles and includes portions of East Feliciana and East Baton Rouge parishes.

Officials are monitoring it, and the Amite River in Denham Springs, as Hurricane Delta approaches the Louisiana coast with an anticipated arrival of Friday evening.

The hurricane has already brought heavy rains to the region, and officials say the rain will likely cause the Amite River to reach minor flood stage sometime this weekend.