Beyond a cold front, some of the coolest temperatures in the last several weeks are expected. Thermometers will moderate through the end of the week.

Today and Tonight: As a frontal system crosses the area from west to east on Tuesday morning, scattered showers and thunderstorms will end from west to east. Through 10am, any thunderstorm could produce brief downpours and gusty wind. However, due to the scattered nature of the activity, not all location will receive rain. Many south of I-10 may stay dry. With returning sunshine by lunchtime, temperatures will recover some 10 degrees to reach the low 80s. Clear skies and light, northerly winds will send overnight lows below average in the upper 40s!

Up Next: Wednesday and Thursday will be pleasant with mainly clear skies and gradually moderating temperatures. By Friday, southerly winds will send afternoon temperatures back into the 80s with a greater buildup in cloud cover. The next frontal system and chance for rain is pegged for next weekend. At this time, that system does not appear to pose a threat for severe weather. 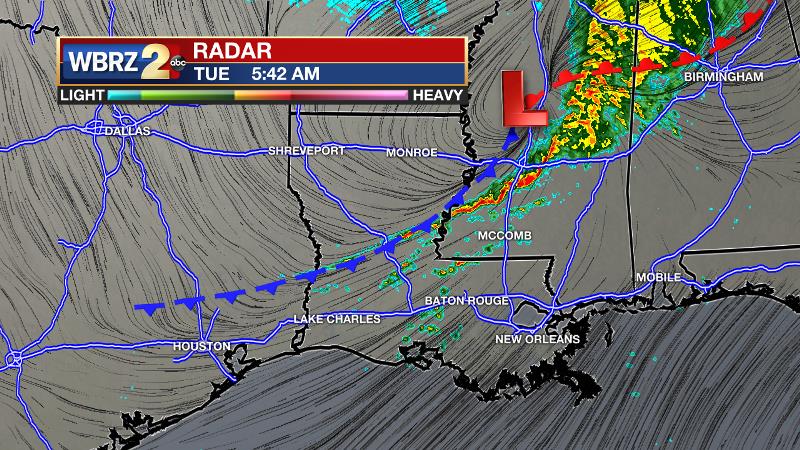 Rain will end from west to east and the cold front drags away on Tuesday afternoon. Due to the warmer starting point in the upper 60s and low 70s along with returning sunshine, Tuesday afternoon will be rather warm in the low to mid 80s. Northerly winds behind the front will then allow much cooler air to settle into the region into Wednesday morning. Low temperatures could dip into the upper 40s in many neighborhoods. A surface high pressure system will build in on Wednesday with dry conditions and a near average temperatures. The high will slide east and an upper level ridge over the Ohio Valley will maintain dry conditions Thursday. Onshore winds will allow a warming trend to end the week. The next upper level trough will drive an associated cold front on Saturday bringing the next chances of showers and thunderstorms.