Contrails found to impact climate change for a different reason

A recent study published in Atmospheric Chemistry and Physics has concluded that contrails have a much larger warming effect than previously thought. This conclusion, along with the expected increase of air traffic, could lead to this warming effect to triple by 2050.

We have all viewed the light, wispy lines drawn out high in the sky in the wake of airplanes high in atmosphere, but there is more to these contrails than previously thought. In the late 1990s and early 2000s, research was leaning more toward a negligible effect between CO2 exhaust and the albedo effect of the contrail itself – meaning that the cloud reflected more solar radiation than it absorbed. It was not until a 2011 study was released that suggested the effect of these contrail clouds actually contributed to atmospheric warming, due to the ice crystals that make up these clouds effectively trapping heat. Unlike low-level clouds which are much thicker and darker, these high-level, wispy clouds let the majority of sunlight through them on their way to the Earth’s surface. This is largely because low-level clouds are made up of liquid water, whereas high altitude clouds are made up of ice. It is this ice that helps to trap the sunlight, or heat, in the atmosphere versus reflecting it back to space as in lower clouds.

Contrails were initially discovered during the first high altitude flights in the 1920s, but it did not become much of a concern until World War II. These lines could highlight the location of high flying bombers, or even obscure the intended target from the bombardier. In 1953, H. Appleman created a chart which successfully determined the criteria of when a jet aircraft would produce a contrail. There are three types of contrails which include short lived, persistent (non-spreading), and persistent (spreading), but all three are formed in the same way depending on available water vapor. 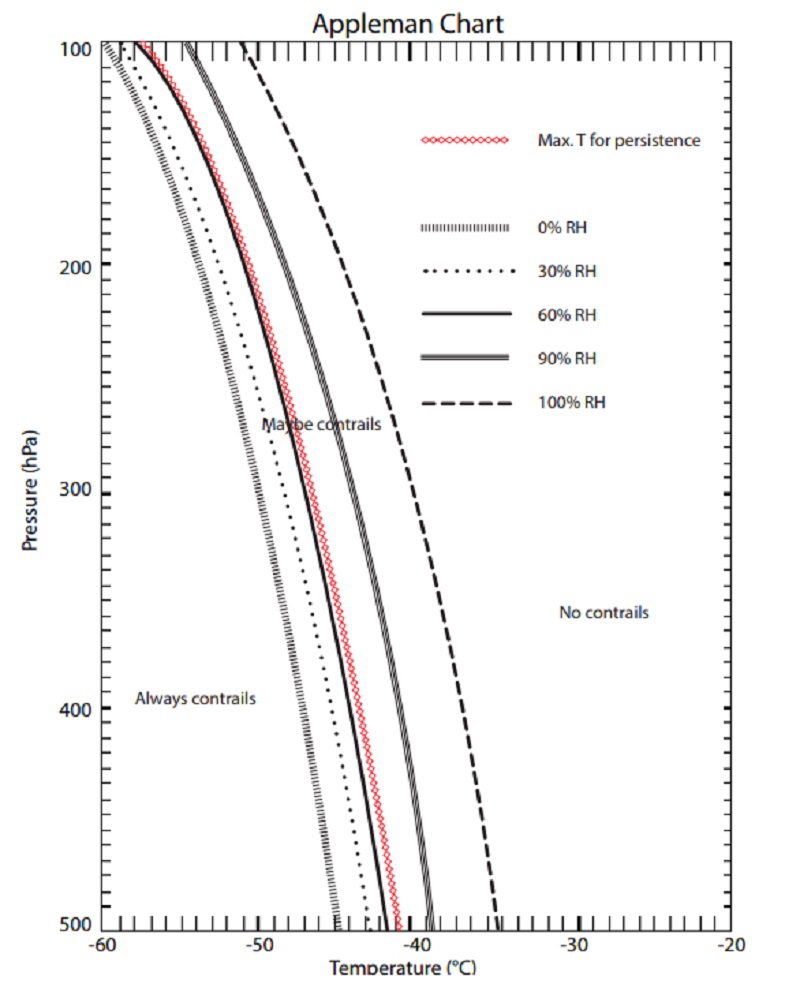 Atmospheric Physicist, Ulrike Burkhardt from the Institute for Atmospheric Physics located in Wessling, Germany, has created a new atmospheric model that will allow scientists to determine how these clouds interact with the atmosphere in a changing climate. The specific project used global contrail coverage from 2006, and modelled the effects of these clouds for 2050 by using predictions of future air traffic and emissions. The results are quite alarming, suggesting that the warming effect of contrail clouds contribute more to atmospheric warming than all the carbon dioxide that has been produced by airplanes since the dawn of aviation. In addition, air traffic is forecast to quadruple over the next 30 years, resulting in a threefold increase in their effect on warming over that timeframe. Even if engine efficiency could drop soot emissions by 50%, this would only lead to a 15% decrease in the exhausts warming effects.

Combustions engines, whether from trains, planes, or automobiles, all emit carbon dioxide. It is the amount and location of this emission that is concerning. On average, a car will emit 19.5 pounds of carbon dioxide per gallon, where as a plane typically produces slightly more than 53 pounds per mile. The Air Transport Action Group (ATAG) reported back in 2014 that 102,465 flights per day take place, which was up 2.7% from the previous year. Average the normal distance of these flights result in about 1,430 miles per flight. This amounts to about 146,524,950 miles per day, 53,481,606,750 miles per year, and about 2.8 trillion pounds or 1.4 billion tons of CO2 that is produced from commercial and freight air traffic. Normally, commercial airlines’ cruising altitude is between 31,000 and 38,000 feet, which is located in the second layer of the atmosphere, the stratosphere. In this layer, temperatures slowly increase with height, and increased CO2 levels actually cool the stratosphere. Initially, this sounds good regarding the climate warming, but it’s quite the opposite. If the lower level of the atmosphere warms, where we are, then consequently the stratosphere will cool – and vice versa. This is the study of radiative transfer theory, which basically translates to the amount of infrared heat energy radiated out to space from a planet needs to equal the amount of solar energy it receives from the sun.

There is no doubt that climate change is occurring, has occurred, and will continue to occur through the rest of time. It’s the understanding and rate of this change that could highlight ways to impede drastic alterations in our climate. Cloud physicist with the National Center for Atmospheric Research, Andrew Gettelman, addressed the contrail cirrus clouds as a complex problem, but their warming effect is on the small scale when looking at the whole of human impacted climate change. “If all we had were contrails, there wouldn’t be global warming.” He also includes that it is imperative that the aviation industry to understand their impacts on both regional and global scales.