A cold front will move into the region on Wednesday night, set to remove the unsettled weather by Thursday night. A round of showers and thunderstorms is expected along the boundary.

Today and Tonight: Much of Wednesday will be quiet, although mostly cloudy and muggy. High temperatures will be in the upper 70s with a spotty shower or two around. Any brief breaks of sun could allow a few neighborhoods to reach 80 degrees. A broken line of showers and thunderstorms is expected to form in western Louisiana and then push into the Baton Rouge area this evening. With a rather unimpressive setup, the Storm Prediction Center has dropped the outlook to a 1 out of 5, “marginal risk” for severe weather. An isolated damaging wind gust could occur along the line. Showers will continue overnight as temperatures begin to take a hit behind the front, falling into the upper 50s. 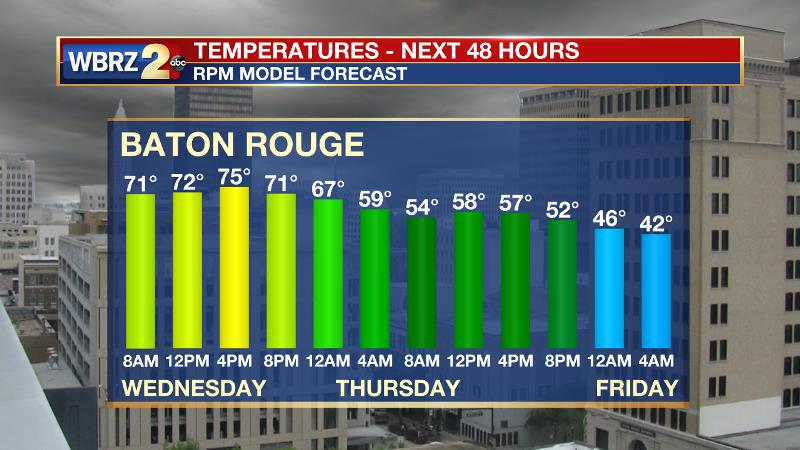 Up Next: Showers will end from west to east around daybreak Thursday morning, but clouds will be stubborn to break. Temperatures will be steady or falling in the low to mid 50s through the day, ending up in the upper 30s by Friday morning. A nice and sunny Valentine’s Day will follow though highs may fail to reach 60 degrees. The first half of the weekend will be cool and quiet with increasing clouds late. Some showers could return as early as Sunday.

An upper level trough over west Texas will advance northeastward into the Midwest through Wednesday and this will send a surface low and cold front from the western Gulf of Mexico into western Tennessee. During the late morning and afternoon hours Wednesday, showers and thunderstorms will develop along the cold front over western Louisiana. Meanwhile, due to a stable and warm layer just above the surface, the local area will notice clouds and a few breaks of sunshine. Only isolated showers are possible through early afternoon. As the cold front moves east into the Baton Rouge area, high dew points and warm temperatures will encourage precipitation development as the upper level winds increase over central Louisiana and southwest Mississippi. The arrival of the front is expected just after the best instability and wind shear begin to depart. Therefore, a broken line of thunderstorms could stir up an isolated strong thunderstorm prior to or along the boundary, but chances continue to look lower. Damaging wind gusts would be the most likely threat, but as is usually the case, any cells that develop ahead of the line could also produce a tornado. With the less than desirable ingredients and asynchronous timing, the SPC reducing the severe weather outlook to a “marginal risk” is reasonable. 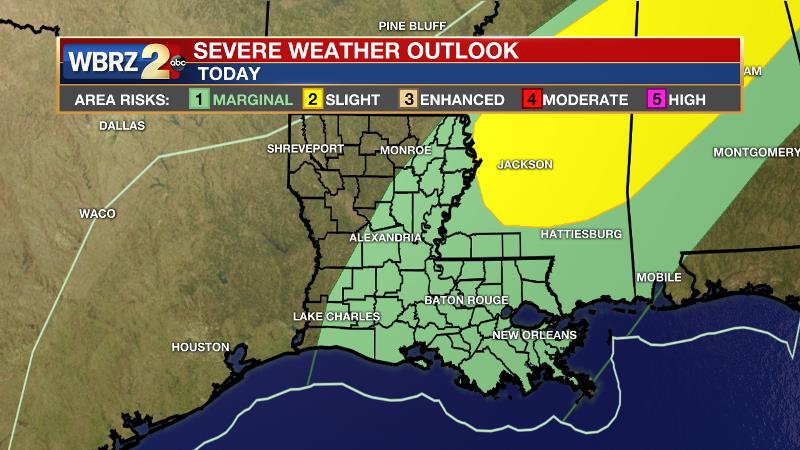 Showers will wrap up around daybreak on Thursday, but the trailing trough axis and low level moisture will allow clouds to remain stubborn. Much colder and drier air will arrive after the cold front moves through Thursday morning and will likely continue into the weekend. After a pair of morning in the upper 30s, temperatures will begin to moderate Saturday afternoon and the trend will continue into next week. There are some differences in the forecast models beginning on Sunday with regard to the placement of a ridge of high pressure building over the region. If the ridge is directly overhead, rain chance will be limited. If the ridge parks farther east, scattered showers will be possible.