***SEVERE T-STORM WARNING*** for the boxed area. Head inside, this is a dangerous thunderstorm. #WBRZwx pic.twitter.com/wSiyCsBx53

A cold front will shift winds and turn temperatures cooler by Friday. A few showers are expected with this first front, but a second front over the weekend is being monitored for severe weather.

Today and Tonight: A frontal system will move into the region on Thursday. This will bring the potential for isolated showers but rain chances are markedly lower for this event than they previously appeared. With some breaks of sun, high temperatures will make it into the mid 80s. Most of the activity will occur behind the front, with showers this evening and overnight. Winds will shift northerly and send low temperatures into the low 60s. 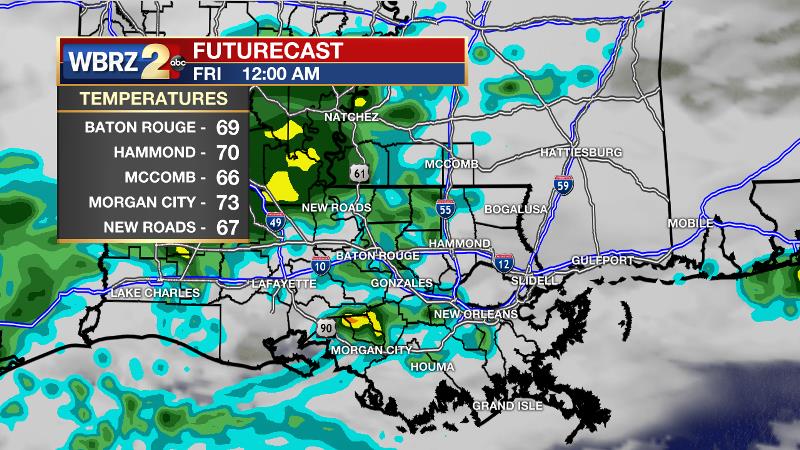 Up Next: Clouds and showers may linger Friday morning followed by some returning sun and cooler highs in the low 70s. Drier conditions will last through Saturday morning and then a period of active, perhaps impactful weather will begin. A warm front lifting through the area from south to north will return showers and thunderstorms to the area as early as Saturday afternoon. When the associated cold front and upper level energy move into the area on Sunday, some of the thunderstorms could be severe. The Storm Prediction Center is using bolder language than usual saying “an outbreak of severe thunderstorms appears possible” on Sunday. Timing and potential threats will become clearer and we get closer. In this time of staying home with loved ones, now is a great opportunity to identify or review your severe weather plan. CLICK HERE for some ideas. Quiet weather and below average temperatures will persist Monday through Wednesday.

The Mississippi River: At Baton Rouge, major flood stage continues with a level of 42.7’ as of Thursday morning. It is projected to crest near 43’ this weekend. The high water is primarily an issue for river traffic and river islands, although some inundation will continue for a few spots north and south of Baton Rouge that are not protected by levees. Unprotected low-lying areas will be flooded and agricultural operations will be impacted on the west side of the river. The grounds of the older part of Louisiana State University's campus become soggy. This includes the area around the Veterinary Medicine building, the Veterinary Medicine Annex, the stadium and ball fields. The city of Baton Rouge and the main LSU campus are protected by levees at this level. This comes after a year where the gauge at Baton Rouge spent a record smashing run of 212 consecutive days above flood stage between January and August. Peaking at 44.1’ on March 19, 2019 the river set its 7th highest recorded crest at Baton Rouge. The level is also high in New Orleans and the U.S. Army Corps of Engineers has opened the Bonnet Carre Spillway.

A cold front will dive across the I-10/12 corridor around midday Thursday with very little precipitation. Interestingly, the front may not be the main game with this system. A moderate to strong upper level disturbance will move over the cold front on Thursday night and generate another round of rain and thunderstorms. Beyond this front, a lull in precipitation will come early Friday through early Saturday as a deep upper level low pressure system in the Southwest U.S. moves over Texas. The upper level trough will begin to orient from northwest to southeast, this is called a negative tilt, and this is a reliable indicator for active weather. Rich low-level moisture will be drawn inland from the Gulf of Mexico in advance of a strengthening surface low that will move north of the local area dragging a cold front across the central Gulf Coast. Instability will work in tandem with a strong jet stream (winds aloft) to result in a very favorable environment for severe thunderstorms to develop. The combination is supportive of strong, long-lived tornadoes and widespread damaging wind. Timing is not yet clear, but will come into focus as we get closer. The front will clear to the east by Sunday night with cooler and drier conditions persisting into early next week. Please stay in touch.