Gradual warming and increasing clouds will set the stage for a cold front this weekend. Don’t tuck away the winter jackets just yet.

Today and Tonight: Your Friday will bring a slight warmup relative to Thursday. High temperatures will make it into the upper 70s with winds turning southeasterly. After some early sun, clouds will thicken during the second half of the day. An upper level disturbance may even create a stray shower or two, mainly during the afternoon hours. Overnight will be mostly cloudy with low temperatures near 60 degrees. Patchy fog is possible too.

Up Next:  Temperatures will break into the lower 80s on Saturday before a cold front arrives. Most of the day looks dry, with some times of sun, but due to the advancing front, a, isolated shower will be carried in the forecast. Overnight Saturday into Sunday, the front will arrive in the form of a broken band of showers and thunderstorms. These will pass followed by brisk northerly winds and a sharp drop in temperatures. Sunday will have some lingering showers and clouds with highs barely returning to the 60s. What happens next is a bit tricky, but the going idea is for some showers stick around into Monday due to another disturbance passing over the lingering cold front in the Gulf. Conditions will clear and moderate beyond that. 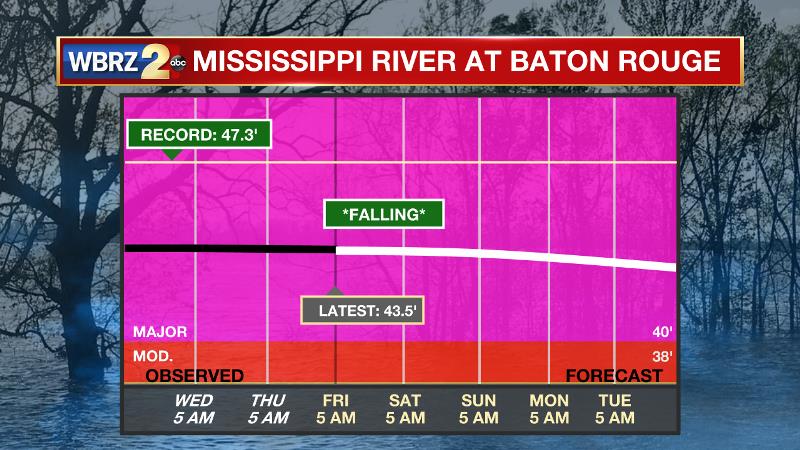 The Mississippi River: At Baton Rouge, major flood stage continues with a level of 43.5’ as of Friday morning. Peaking at 44.1’ on March 19, the river set its 7th highest recorded crest at Baton Rouge. In addition, at 83 days this is now the 4th longest period above flood stage. Due to river flooding and drainage north of the area, runoff will keep the river high for many days to come. The high water is primarily an issue for river traffic and river islands, although some inundation will continue unprotected low-lying areas. Agricultural operations will be impacted on the west side of the river. The grounds of the older part of Louisiana State University's campus become soggy. This includes the area around the Veterinary Medicine building, the Veterinary Medicine Annex, the stadium and ball fields. The city of Baton Rouge and the main LSU campus are protected by levees up to 47 feet. Some seepage may be noted due to the long duration of high water placing pressure on the levees. Water from the extensive Missouri River flooding across the Upper Midwest will not reach Baton Rouge until April and the Mississippi River is expected to have fallen some by that time. As some of the Mississippi River diverts into the Atchafalaya River, gauges at Krotz Springs and Morgan City will stay high as well. Like Big Muddy, this is expected to be a prolonged event but is not uncommon for the time of year. Read more HERE.

A surface ridge situated east of the region will promote increasing moisture as onshore flow solidifies. An upper level disturbance has allowed scattered showers to develop in Eastern Texas and some of these will hold together into the local area early this afternoon. Isolated activity will be possible, mainly west of I-55. Later Saturday, a cold front will be driven into the area by a trough digging into the Southeastern U.S. A shower or two may develop ahead of the boundary during the afternoon hours but it is more likely that most action will come after dark. The cold front will chug through overnight with a broken line of rain and thunderstorms, meaning that some spots may miss precipitation. Temperatures will drop considerably behind the front on Sunday with high temperatures struggling for 60 degrees. Some clouds will hang on as well, adding to the chilly feel. Monday remains a difficult forecast due to differences in model solutions. The GFS and ECMWF both suggest a secondary southern stream trough will push through Monday. The GFS shows a more southern route, which would keep the bulk of rain associated with the trough in the Gulf. The ECMWF shows a northern pass and would result in more widespread showers. Hopefully, this becomes clearer over the weekend. Beyond Monday, high pressure will build in from the north and allow clearing skies and cooler than average temperatures into Wednesday.