Barry on track, gaining strength as it approaches Louisiana coast

Friday 7 A.M. UPDATE: Barry's track seems to be intact. However, its intensity is still unclear. The National Hurricane Center says Barry has become "a little stronger."

TS Barry's slow movement will result in a long period of heavy rainfall as well as a flood threat along the central Gulf Coast and inland through the lower Mississippi Valley through the weekend and into next week.

Flash flooding and river flooding are likely, some of which may be significant.

Today and Tonight: Periods of sun and clouds through the morning hours, but a rain band will be developing around 2 PM and move east to west across our area until 8 PM. Drier conditions will be the case after that, as we are expected between .2” to .5” inches of rain today. Heavy rainfall, windy conditions, and frequent lightning is expected with the developing rain. Temperatures will be warming into the 90s around lunch, with highs near 91° with gusty winds out of the northeast. Showers taper off after 7 PM, as cloudy skies stay overnight. Temperatures will drop near 76° for your low into Friday morning. 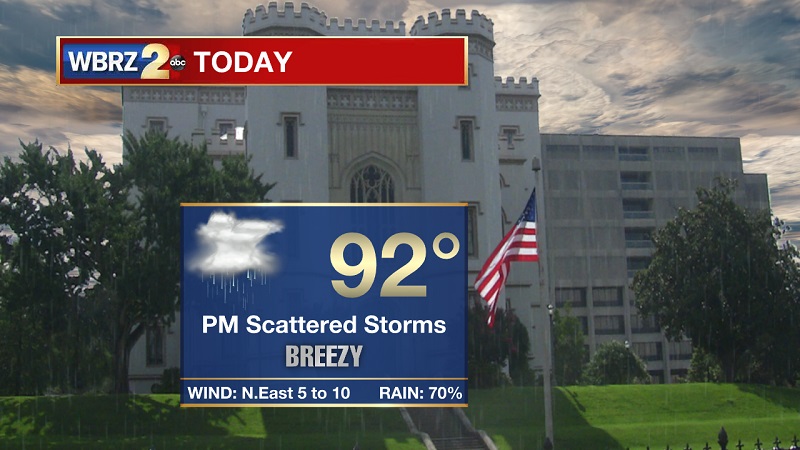 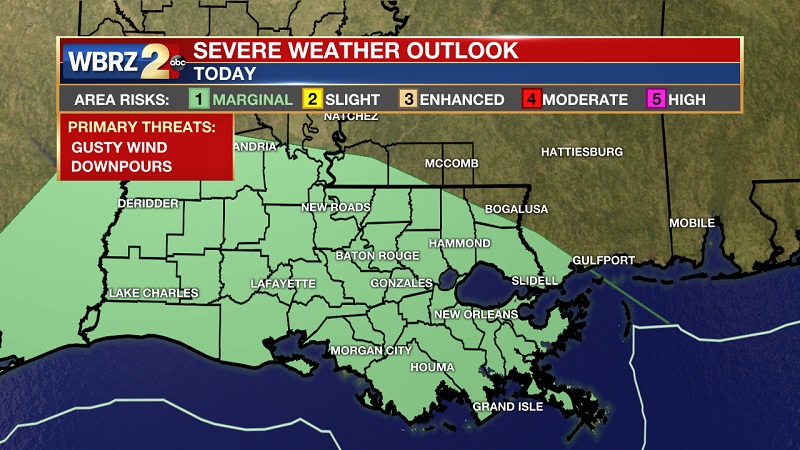 Up Next:  Rain bands will tighten and occur more often through Friday, before the potential tropical system moves onshore Saturday morning as a Category 1 hurricane. Heavy rainfall and flooding is likely. 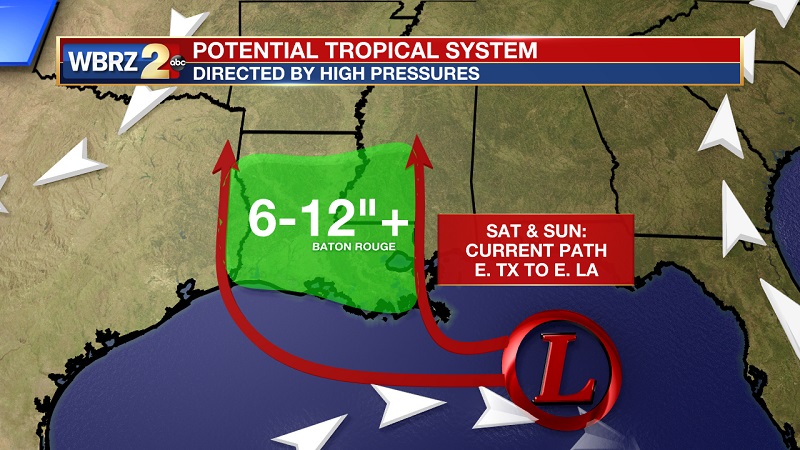 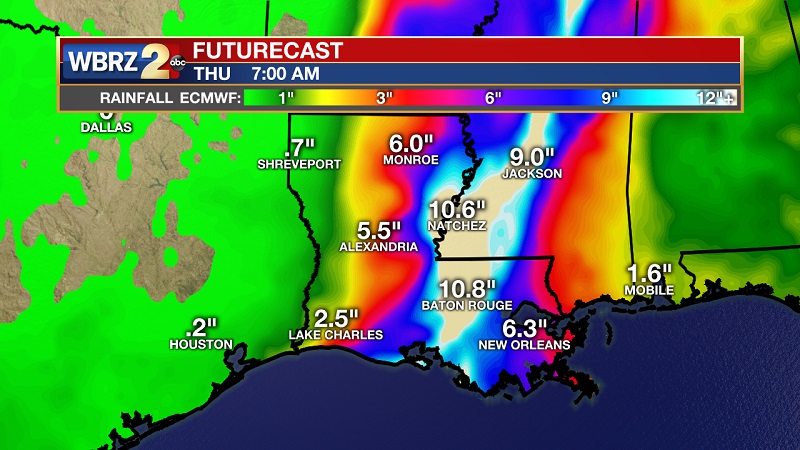 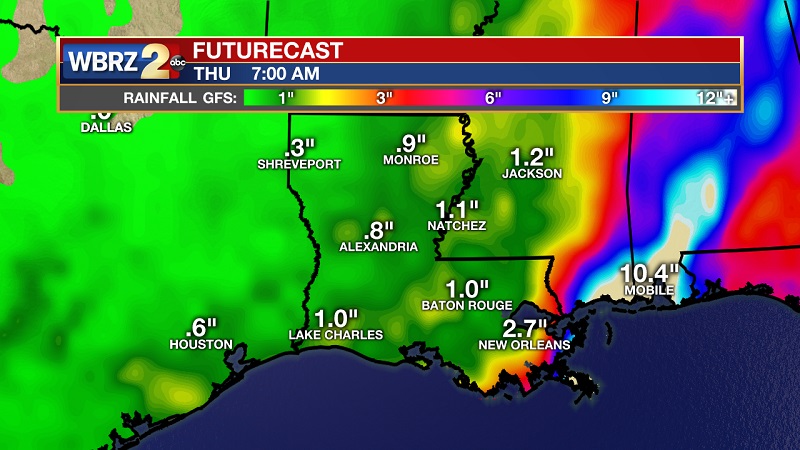 The Tropics: The convective activity associated with the broad area of low pressure is still spread out, and the center of circulation is not well defined at this time. Both surface and scatterometer data indicate that the winds remain near 25 knots. The modest northerly shear affecting the system should not hamper further development. Overall, the environmental conditions still favor the formation of a tropical depression or a tropical storm later today, and as the system moves over warm water, strengthening is indicated. The intensity models are not as aggressive as they were in previous runs, but still bring the disturbance to hurricane status in about 48 hours or so as the disturbance approaches the coast.

During the last several hours, the low pressure area has barely moved due to weak steering currents. However, a westward drift should begin soon. The system is heading toward a weakness in the ridge, and this pattern should induce a slow turn toward the west-northwest and then north during the next 3 to 5 days. The National Hurricane Center track forecast continues to be located on the western edge of the guidance models, and it has been adjusted slightly eastward to be more consistent with models. It should be noted that track errors are typically larger for potential tropical cyclone systems than more mature systems due to their disorganization. In addition, the run-to-run consistency in the track models has been poor, so confidence in the details of the forecast is not high at the moment.

*A tropical depression is expected to form later today over the northern Gulf of Mexico. Conditions appear favorable for this system to strengthen to a hurricane that will bring storm surge, rainfall and wind hazards to the central Gulf Coast.

*A dangerous storm surge is possible in portions of southern and southeastern Louisiana where a Storm Surge Watch is in effect. Additional storms surge watches may be needed later today. Residents in these areas should monitor the progress of this system and listen to any advice given by local officials.

*A Hurricane Watch is in effect for much of the Louisiana coast and additional tropical storm or hurricane waters and warnings could be required. Residents in the watch area should ensure they have their hurricane plan in place.

*The slow movement of this system will result in a long duration of heavy rainfall threat along the central Gulf Coast and inland through the lower Mississippi Valley through the weekend and potentially into early next week. Flash flooding and river flooding will become increasingly likely, some of which may be significant, especially along and east of the track of the system. Currently, weather models are in better agreement with path and intensity, but have kept ticking east over the last 12 hours. Morning models are continuing with this trend, but confidence is still low - so it is imperative to stay up-to-date with developments. 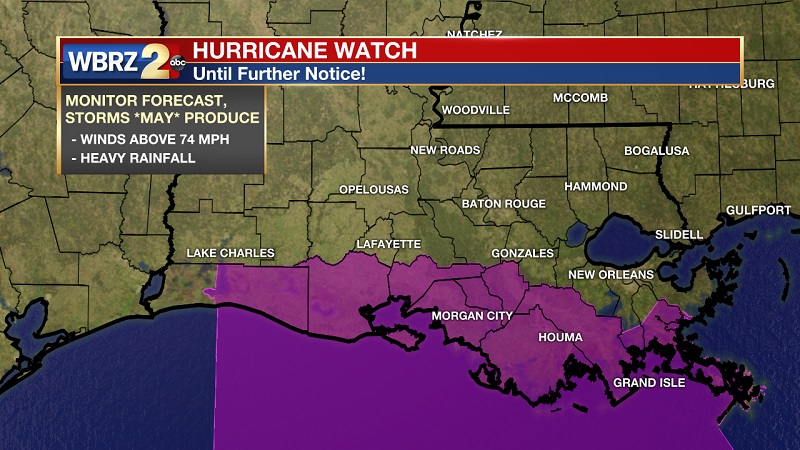 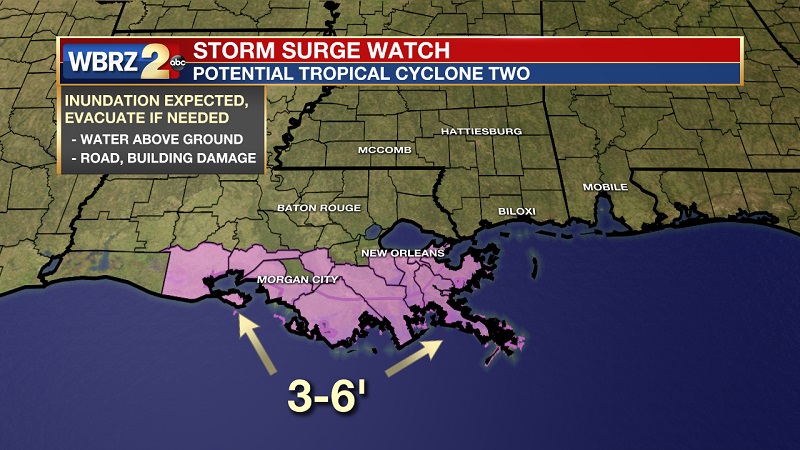 Rain bands will be developing through the afternoon between 2 PM and 8 PM which will move east to west from the Gulf system. These bands will incur periods of heavy rainfall, gusty winds, and frequent lightning. These bands will increase and tighten Friday and into Saturday as the system approach the Louisiana coast. Guidance is suggesting .2” to .5” today and Friday, but rain amounts will increase great beginning late Friday. We can expect 6” to 12” across our area, with a possibility of experiencing around 15” to 20” in isolated spots. These higher amounts will be highly dependent on the storm’s path and speed as it moves onshore and crosses the I-10 corridor. A Hurricane Watch is in effect for the Mouth of the Mississippi River to Cameron, and a Storm Surge Watch is in effect for the mouth of the Mississippi River to Intracoastal City with a storm surge of 3 to 6 feet. After the storm pushes through southern Louisiana, it will move quickly north into Arkansas Sunday afternoon. Scattered rain and storms will stay in the forecast through the weekend, before tapering off and being more confined to afternoon hours into the beginning part of the workweek.