Barry a depression but flash flooding possible through Monday

As expected, rain bands associated with the remains of Barry have brought periodic downpours and some flash flooding to the region on Sunday. In addition to that, strong gusty squalls and embedded tornadoes have resulted in numerous trees and powerlines coming down. Needless to say, while Friday’s “worse-case scenario” forecast has been avoided, this has still been a tropical event that has created some problems. Similar issues will continue through Monday afternoon until Barry’s influence fully clears the area by Tuesday.

Fortunately, much of the street flooding problems have been less pronounced due to the low volume of vehicles on roads. As many return to work Monday, PLEASE remember not to drive across flooded roads. If it is raining so hard that you cannot see what is happening on the road below, consider pulling off until visibility improves. 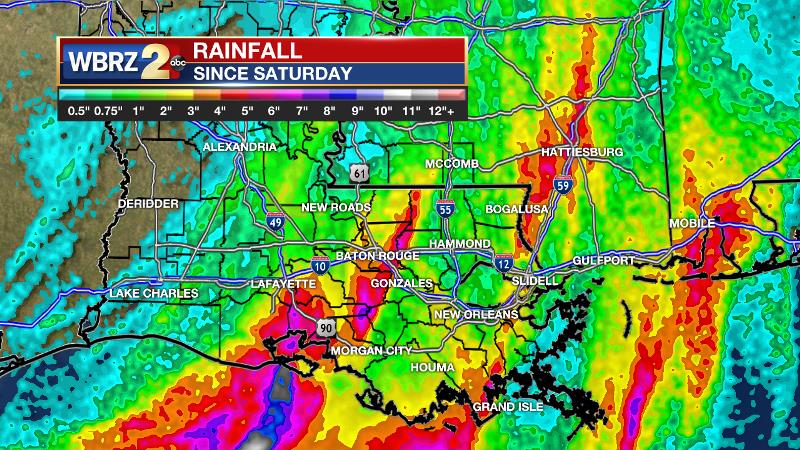 A ***FLASH FLOOD WATCH*** remains in effect through Monday morning for the entire forecast area. Radar estimates a range of 1 to 7 inches of rain has fallen across the area since Saturday. Especially in locations that have experienced the heavier totals, an additional 2 to 4 inches will cause problems. Expect street and poor drainage flooding and smaller streams may come above bankfull.

Perhaps the major weather headline of the day affecting the highest number of people is that the river forecasts have been trimmed tremendously. All major gauging sites are now forecast to crest well below flood stage.

JUST IN: river flood warnings *CANCELED* for Comite River at Joor Rd, Amite River at Denham Springs, Bayou Manchac and Port Vincent, Tickfaw River at Liverpool, Montpelier and Holden and the Tangipahoa River at Robert. All of these locations expected to crest BELOW flood stage.

Tonight: Showers and thunderstorms associated with tropical rain bands will remain possible overnight. However, the bands should begin to become more spread out and thinner heading into Monday morning. Temperatures will be in the mid 70s with south winds of 10-15mph.

Monday: One more intense round of rain and thunderstorms appears possible for the first half of Monday. Like Sunday, this activity could be accompanied by embedded tornadoes and rain rates should be heavy enough to produce poor drainage issues or flash flooding. A bit of sun could peek out allowing temperatures to climb into the mid 80s. Of course, any sun would also help charge up the “Barry energy” for more numerous showers and thunderstorms. 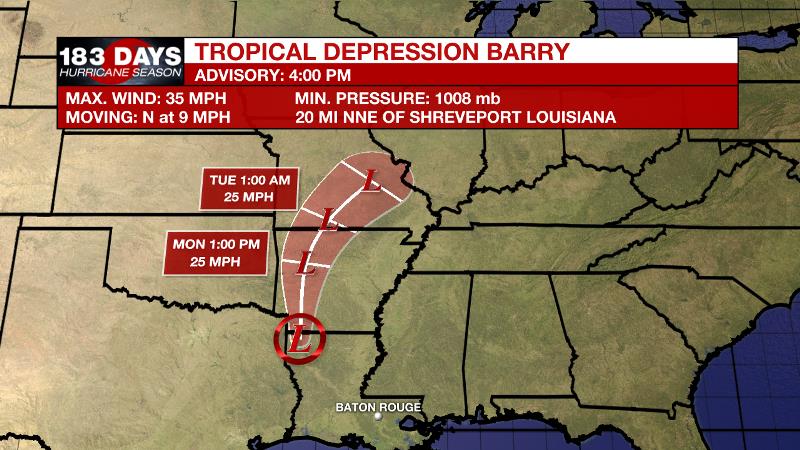 Barry: As of 4pm Sunday, Barry's radar and satellite presentation continued to lessen and the center of circulation had become ill defined near Shreveport, Louisiana. Winds associated with this area dropped below tropical storm force and Barry has become a weakening depression. The depression will continue Sunday night and then turn northeast on Monday becoming a remnant low. The National Hurricane Center will no longer issue advisories on this storm.

Please do not let your guard down yet. The rain forecast is still significant and a reduction in flooding issues is not the same as no flooding issues.

Here is the latest: