All lanes now open on I-12 W at Airline, but some delays remain

BATON ROUGE - All lanes along I-12 West at Airline are now open after a truck lost its load and a nearly 4-hour long cleanup process brought traffic to a near standstill. 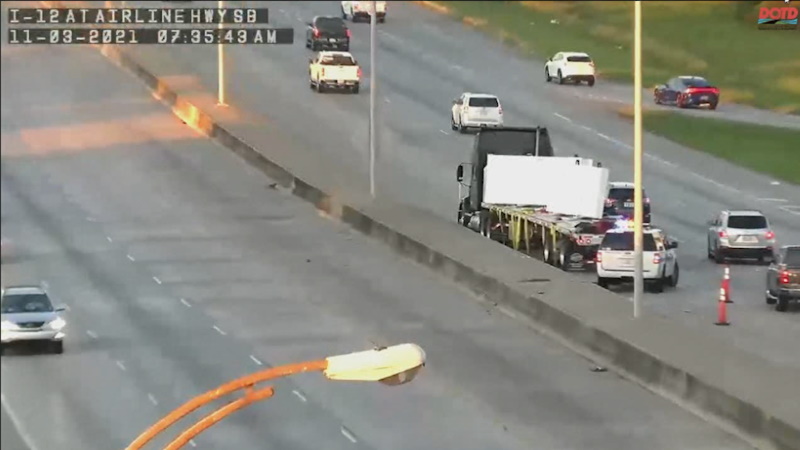 The Wednesday morning incident occurred shortly before 5:30 a.m. as the driver of a'GEO Family Enterprise LLC' truck had to slam on his brakes due to another vehicle suddenly cutting in front of him.

The truck was hauling a load of granite countertops, and as the driver slammed on his brakes the load fell from truck and shattered all over the roadway.

As a result of the incident, multiple lanes of traffic along I-12 West at Airline were blocked for hours while crews worked to clean up the debris.

Crews still working and only one lane open on I-12-W @ Airline, its been a 3 hour operation so far. pic.twitter.com/nHw1dTpWyq

UPDATE- Crews finally working to clear out shattered countertops on I-12 W at Airline. Take 190 this morning! pic.twitter.com/tepN9PpreN

TRAFFIC ALERT- Truck spilled a load of stone countertops on I-12 West at Airline and shattered debris all over the roadway. Avoid the area. pic.twitter.com/TZxnDXjfhH

Fortunately, the incident did not result in any injuries. But it did cause severe congestion throughout the Baton Rouge area.

As the many drivers who normally traveled along I-12 West during their morning commutes resorted to using surface streets, traffic along streets such as Florida Boulevard and Old Hammond Highway became a bumper-to-bumper nightmare.

For some, a morning commute that would normally take 20 minutes, took as long as two hours.